So there’s me, on the first day of Spring, noodling around the Riverwalk just as if I didn’t have anything else to do. And man, it felt like Spring. Bright and sunny, almost warm, fresh breeze. Bicyclists were out, and young mothers with strollers, and over the lunch hour all the employed people abandoned their offices and escaped the skywalk and hit the sidewalks with all the energy of spawning salmon.

So yeah, even though I had work that needed to be done, I was out walking. And here’s a true thing: you cannot walk along the Riverwalk without stopping occasionally and peeking over the balustrade to watch the river flow by. While I was doing that, I saw a milky white film of some sort, splashed out on the river. Who knows what it was — soap scum maybe, or chemical waste, or something organic roiled up by the snow melt rushing over the dam upstream. Whatever it was, my immediate reaction was disappointment and a mild distaste at the sight of it.

But then it sort of drew me in. It was almost hypnotic, the way the motion of the river shaped and reshaped the stuff, the way the color shifted with each tiny wave.

I must have watched this happen for a quarter of an hour. I can’t say it was pretty, but there was something compelling about it — something unexpectedly absorbing. The river, I knew, would shrug this stuff off, whatever it was. Even in the short time I was there, I could see the stuff gradually being disrupted by the current — broken up, disorganized, reorganized, and all while being forced inevitably downstream. There wasn’t a single moment when the stuff held a coherent shape.

I realized the only constant in this event was me. I was standing still. I wasn’t moving. I was the only fixed point in an otherwise unfixed occurrence.

You guys, did you know you were paralyzed? Literally paralyzed. Oh, and scared too. Why are you paralyzed (literally) and scared? I’ll tell you. It’s totally on account of the Socialist President of Islamic Ameriqa, Baraq Hussein Obama. Also, gay folks.

Frightened to death, you guys. And literally paralyzed. Nobody — not the political leadership, not the political consultants, not the Republican Party (oh, and also many citizens) — absolutely nobody is willing to say what they really think. Because if people were to say what they really think, other people might really think they’re literally hateful bigots and asshats (and of course, they’d be wrong — but those other folks, who are probably literally gay, would totally say what they think about hateful bigoted asshattery because they’ve apparently got some sort of gay anti-paralysis gene, or something). 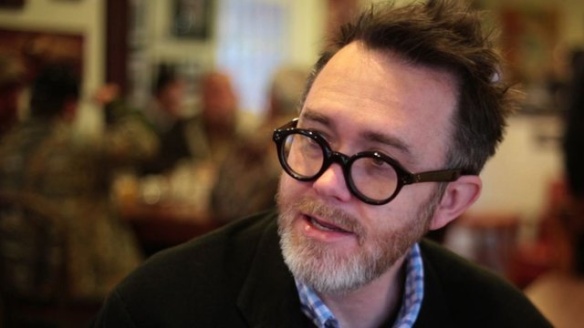 How bad is it? It’s so bad that Christians are terrified (probably literally) to voice their belief that same-sex marriage is going to totally destroy America and make Jeebus have grand mal seizures. Serious Conservative Thinker Rod Dreher weeps (figuratively) for the oppressed and silenced Christians:

Christians and other traditionalists were wrong to have demonized gay people in the past, and forced them to live in the closet for fear of their careers. Gay rights activists did a lot of good work to end this climate of fear, and to wake the rest of us up to the humanity of our gay brothers and sisters, and to increase tolerance for them. But it is to their great discredit that they have created a climate of intolerance and, yes, hatred, that sends traditionalist Christians into professional closets of their own.

C’mon gay folks! See? Christians admit they may have made some mistakes! You know, in the past. Sure, there are still a few Christians who may have politely suggested y’all shouldn’t be getting married to each other (and okay, maybe y’all should be literally stoned to death), but is that any reason to make them feel bad about their opinions? Gay folks, you are literally oppressing Christians by making them feel they can’t voice their opinion that y’all don’t deserve to get married and be happy (and, you know, that whole stoning to death business). Is it their fault y’all are possessed by demons? Is it!!??

Too paralyzed by fear to speak — must hold up sign!

Okay, okay, maybe some of the things Christians have been saying (literally for centuries) about gay folks might have led to some youthful high spirits and occasional harmless hazing (and yeah, okay, maybe some taunting and beatings, and yeah, okay, terrorizing some gay kids until they literally committed suicide), but surely that should have taught y’all some compassion. Y’all know how it feels to be ostracized — so c’mon, gay folks, practice a little tolerance. You know…toward Christians.

A paralyzed crowd of literal Christians, too terrified to speak!

This is America, gay folks! Literally America! Where everybody has to right to free speech (unless, you know, it offends Jeebus). It’s America, and the Constitution of These United States specifically says Christians shouldn’t have to bake cakes for gay weddings (it’s in one of those Article things, or maybe an amendment or something).

So loosen up, gay folks! Don’t take it personally when Christians refuse to bake your wedding cakes. Don’t be so sensitive when they point out that demon-possession thing! It’s not Rush Limbaugh’s fault that Jeebus and the Constitution won’t let Christians do any gay cake-baking (not a euphemism for anything). It’s hurtful to Rush when y’all suggest he’s a bigot. Hurtful, you guys! In fact, I have it on high authority that Rush took the Zimbio Celebrity Boyfriend quiz…and nailed George Clooney (he makes Rush feel like the only girl in the world while it lasts).

It’s a shame, gay folks, that you have Christians so paralyzed and fearful. It’s a shame Christians don’t feel they can express their truest and deepest feelings with the people they care most about. It’s a shame they’ve been forced to hide who they really are.

It’s just such a shame. Literally.