The revision list informs me I starting writing this post on August 21, 2018. I’ve revised it eight times in the intervening months without publishing it. I chose not to publish it because the supporting evidence was too complex to fit conveniently in a blog post and I didn’t want to assert that Comrade Trump was an intelligence asset without backing it up. Happily, the New York Times has finally done all that, and I can simply link to their article:

F.B.I. Opened Inquiry Into Whether Trump Was Secretly Working on Behalf of Russia

Here’s the meat of my original much-revised post. I’ve edited out all the supporting material, I encourage you to read the Times article, and a rather good summary of the evidence by Politico.

I know that sounds like some conspiracy theory shit, but I’m serious. It’s probably a good idea to define ‘intelligence asset’. An asset is someone or something intended, developed, cultivated or utilized to gather or disseminate information that might be useful to an intelligence service. That’s all it means.

It doesn’t mean Trump is a Russian spy. It doesn’t mean he’s intentionally working for his boy Vlad Putin. It just means Putin is using Trump to further Russia’s geo-political agenda, and has been doing so since Trump began his campaign. It’s possible — even likely — Trump isn’t aware he’s being used. 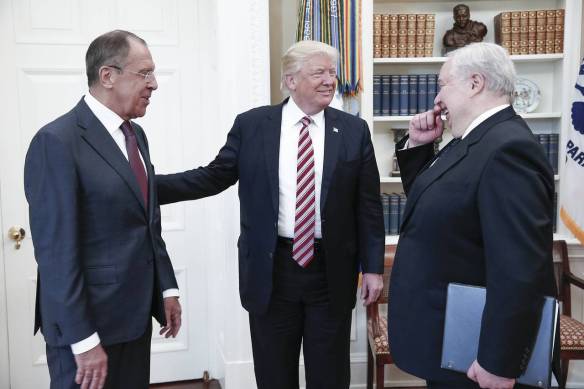 Let’s face it, Comrade Trump is a classic example of the Dunning-Kruger effect (which, for some reason, I always read as the Freddie Kruger effect). The D-K effect is defined as ‘a cognitive bias in which people of low ability have illusory superiority and mistakenly assess their cognitive ability as greater than it is.’ In other words, the D-K effect describes folks who actually aren’t terribly clever but believe they are. Comrade Trump has claimed expert knowledge of: international trade, politicians, social media, ISIS, campaign finance, television ratings, taxes, the visa system, governance, debt, renewable energy, the law, infrastructure, finances, drone technology, science, border security, and the economy. In fact, he’s shown himself to be painfully ignorant in those areas.

Because of the D-K effect and his massive ego, Trump is easily manipulated. And let’s not forget, Putin is a former intelligence officer who has worked undercover and has been trained by experts in social manipulation. But it’s not just a matter of Trump being a dupe; there are a lot of other reasons he may be acting as a Russian asset.

He’s vulnerable to kompromat. I mentioned this back in July of last year. It seems probable that Putin has something on Trump. It could be his shady business and banking transactions with Russian and former Soviet states have made him vulnerable to blackmail. It could be money laundering in the US; we know a LOT of Russians have purchased Trump condos and apartments for millions of dollars (and real estate is the money launderer’s favorite tactic). It could, I suppose, be the infamous pee tape, though I think that’s unlikely. I’m inclined to think the Trump kompromat is more criminal than salacious.

It really doesn’t matter what his motives are; what matters is that Donald Trump, the sitting president of the United States, is furthering the geo-political agenda of a hostile foreign nation. What matters is that one of this nation’s two major political parties is complicit in Comrade Trump’s offenses.

Again, the reason I didn’t publish this back in August was that I wanted to include evidence to support the claim — but all that evidence made for an awkwardly long blog post. Over the past several months, even more supporting material has become known and has been reported by major news sources.

Even so, it still sounds incredible to state that the President of the United States is a Russian intelligence asset. But I can’t find any other explanation for Trump’s behavior, for his pro-Russian policies, for his reluctance to impose sanctions against Russia or Russian oligarchs, for his willingness to remove those sanctions, for his campaign’s frequent inappropriate interactions with Russian agents, and for his consistent attempts to undermine US law enforcement and intelligence agencies.

It seems clear the guy is helping the Russians and damaging the security of the nation he’s sworn to defend.

2 thoughts on “with an emphasis on the ass”