You guys, former sorta Governor of Alaska, Sarah Palin has had it up to here with your elitist tyranny of sentence structure. In her stirring speech made before a packed audience of fellow patriots Palin cast off the iron chains of syntax, context, and linear thought, as well as grammar, or in other words Free at last, free at last, as Jeebus said on his midnight ride to address the nation on the critical importunation that only drilling for oil can set These Great United States on the right course to prosperity and keeping illegal immigrants from driving, as Ronald Reagan said in the Gettysburg Address.

You can see the entire ‘speech’ here:

And oh, it is quite the speech, yessiree, until about thirteen minutes into it when the teleprompter went toes up and Governoress Palin was given the opportunity to say what exactly was exactly on her mind exactly as she thought it. Insights and wisdoms that, which no doubt, without fear or the burden of the lamestream media were, you know, uttered and uttered boldly.As did our forefathers before us. And Reagan, too also.

The audience sat stunned and amazed as Palin spoke and addressed many of the important issues faced by the world and America, which as you may have used to know is the greatest nation of the planet of Earth, even if Obama bows to Muslim leaders while refusing to negotiate with our own elected leaders in Congress, is that how he thinks hope and change works? Well, it isn’t. Also? Nobody likes Michael Moore. Or his stupid hat. 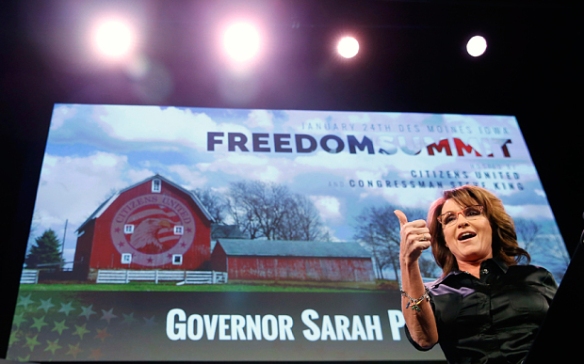 Not everybody, including some noble Republicans, saw the underlying insights and wisdoms, even among those that are to be found in FreeRepublic. Some were perhaps maybe sorta kinda almost maybe dismissive almost maybe of the former governor.

“I watched it and there were smatterings of applause and some laughter. Palin was all over the place. No real coherence or continuity. Just a bunch of one liners.”

“I listened for a few minutes but Mrs. Palin’s shrill, runaway, ululating voice got to me immediately. My God….just about the worst, most irritating voice I’ve ever heard emanating from any politician’s throat. Pulling myself together, I continued to watch, and it only got worse. I have but one observation….the speech was corny, folksy, trite, lacking form or coherence and almost void of issues with proposed answers presented logically and with craftsmanship.”

But naysayers will say nay, as we all know, just like the Nazis said nay to Patrick Henry who swore he’d not give up the ship until he saw the whites of their eyes. Many stepped up and forward and up again to defend the former sorta kinda governor and her graceful eloquent-like ululating voice.

“My wife and I just watched (Sunday afternoon) your EXCELLENTLY PREPARED AND PRESENTED SPEECH at the Freedom Summit.”

“The theme was she is kicking off her campaign and she laid out the path to victory. The ending was inspiring. She is the only one who can win.”

“Her speech was fine. Anyone who would make a comment such as yours is coming from a Pre-determined animus. You are exposed.”

“I watched the entire Palin speech. She hit on every theme we believe in here on FreeRepublic. It was not incoherent, she was not drunk, she did not ramble. It was entertaining, and that is her informal style of speech. I would rather have that level of reality and honesty than trained speakers who are polished but say nothing that they actually believe in. She is the next Ronald Reagan.”

“Her new speech pattern with her SINCERE gestures in this presentation was tailored to deliver specific information to specific people and not just to persuade potential voters and supporters who were in attendance there. I’m a voice coach. I pay attention to how she’s doing. She nailed it Saturday in Iowa.”

And, of course, there those among FreeRepublic who support near-Governor Palin totally and completely and with all their hearts though not for President of These United States but a lesser and more girlier job, as intended by God and the grand old flag that flew so proudly over Fort Sumter when the Japanese attacked and Francis Scott Card wrote the Star Spankled Banner for. Like this guy:

“She would make an OUTSTANDING Cabinet member. Say Secretary of Energy or Secretary of the Interior. She could make LIBTARD heads explode.”

And who among us would deny the importance of a policy based entirely on exploding Libtard heads? Not the Founding Fathers, no sirree, who wrote the Constitution and protected our rights to carry without having to explain our faith or creed to Harvard elites who would mock and jeer and cast the first fish upon the water. Amen. 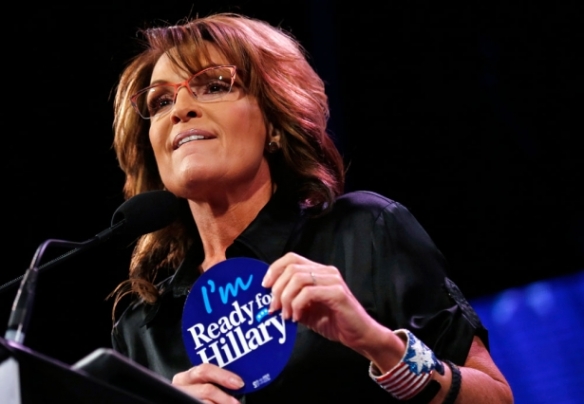 Governor-lite Palin is considering, she says, and who could doubt her sincerity, which is an attribute needed to be presidential like Reagan, to run for the highest office in the land or the entire world in 2016 though she hasn’t made a decision yet, and won’t until she prays to Jeebus and also Reagan.