I wrote about Chris Kyle a couple of years ago, shortly after he was murdered on a Texas gun range. I didn’t know very much about Kyle at the time. I was familiar with his name, of course, and I’d heard about some of his exploits. I was aware he’d worked with a couple of ghost writers and had published an autobiography, though I hadn’t yet read it (I bought it a few months later and labored through it). I knew just enough about Chris Kyle to say he was “one of those guys — the ones they make American movies about.” And hey, they did. American Sniper. 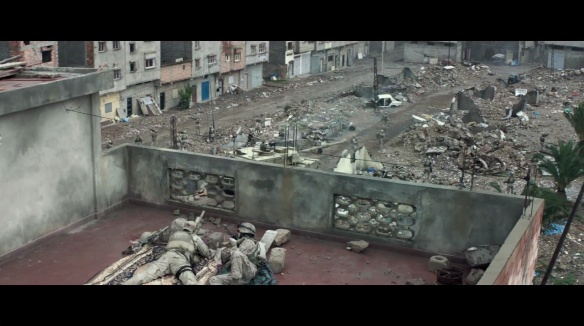 Last weekend I watched the movie. I watched it during brunch, at a ‘brewhouse’ theater where you could have a mimosa and a mediocre omelet while you watched the actor playing Chris Kyle stretched out on a rooftop, picking off Iraqis. As a movie — more specifically, as a war movie — it mostly worked. There were lots of explosions, some nicely directed scenes of urban combat, and enough attention to military detail to please anybody who likes that stuff (and yeah, I admit it, I like military hardware). I also thought it did a fine job of showing how destructive repeated deployments were to the troops and their families. So yeah, as a war movie, it was pretty good. But the thing about war movies is that they aren’t really about war; they’re about the people who fight in wars. War is the environment in which the movie takes place. There’s no concern about why the characters are at war, or the socio-political events that led to war. American Sniper mostly ignores all that. Oh, there are a couple of bullshit scenes showing an attack on a U.S. embassy, and the collapse of the WTC on 9/11 — neither of which had anything to do with the invasion of Iraq. But all that matters to the movie is the suggestion that there are bad guys who need killing, and Chris Kyle is just the guy to do it. And that’s as faithful as the movie gets to Kyle’s autobiography. The movie has almost no nuance, Kyle’s book has none at all. Chris Kyle was not a nuanced sort of guy. Where the movie shows Kyle emotionally distressed after having to decide whether or not to shoot a woman and a child, Kyle’s account of the event shows no distress at all. None. Of course, in the book Kyle only kills the mother — but he makes it perfectly clear it didn’t bother him. 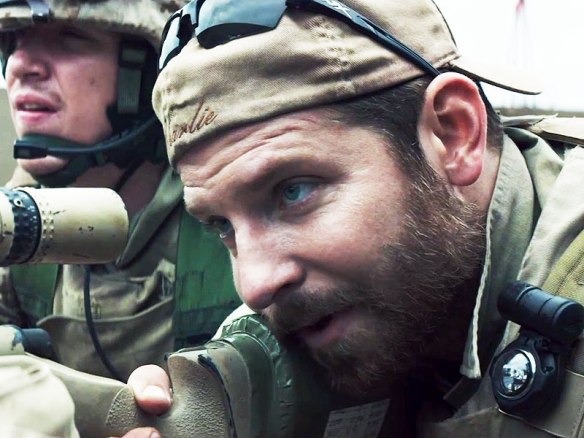 Bradley Cooper (as Chris Kyle) sighting in on an Iraqi mother

There are a LOT of discrepancies between the movie and the book. There are a LOT of discrepancies between the book and the facts. Chris Kyle, to be blunt, lied about a lot of things in the book. When I first wrote about him, I stated that “[b]y all accounts, Chris Kyle was a nice guy. A nice guy who killed a couple hundred people.” He was a nice guy who thought killing ‘bad guys’ was fun. Chris Kyle claimed to be a simple person, but there really are no simple people. He wasn’t any one thing. He probably was a nice guy. Most of the time. Unless he had a reason to kill you. Unless he believed he had a reason to kill you. He was a hero. A hero who shot people in the back when they weren’t looking. But also a hero who wanted to be the first guy through the door when clearing a building. He was, I’m told, a good husband and father, who was also perfectly shitty at being a husband and father. He was a liar. He was a damned good soldier. Some folks, having read his book and seen the movie, are calling Kyle a sociopath. They may be right. But if you have to have a military, you want people like Chris Kyle in it. If you’re going to send people to war, you want to send people like Kyle. You want sensible and rational leaders, but you also want a sprinkling of semi-disciplined sociopaths. 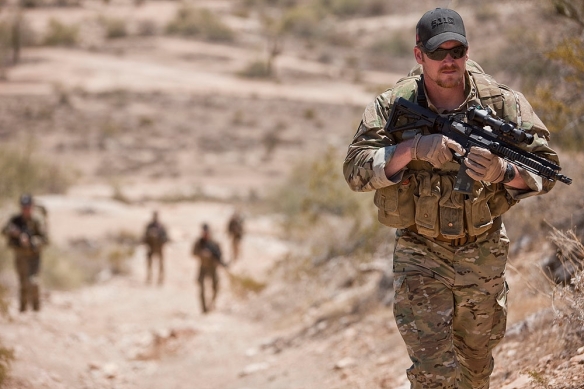 Kyle on a training course after retiring from the Navy

One of the best novels written about war and the people who fight wars is Piece of Cake, by Derek Robinson. It’s about RAF Hurricane pilots in WWII. There’s one scene in which a character describes a group of fighter pilots.

“They’re all a bit mad, you know. They wouldn’t do it unless there was a damn good chance of getting killed, would they? So they can’t be completely normal. They’re not what you’d call model citizens, any of them. More like vandals, I suppose. They’re just itching to be turned loose with an eight-gun Hurricane on some lumbering great bomber. I mean, that’s your average fighter pilot’s attitude, isn’t it. Show him something, anything really, and deep down inside, his first reaction is: What sort of a mess could I make of that with a couple of three-second bursts? Herd of cows, double-decker bus, garden party — makes no difference what it is, that’s the thought in the back his mind. Not surprising, really. I’ve often thought it’s a damn good job they’re in the RAF, otherwise they’d all be out there blowing up banks.”

Replace ‘RAF pilot’ with ‘Navy SEAL’ and you have Chris Kyle. When I wrote about him before, I said “I haven’t a clue whether I’d have liked him or not, but I can guarantee you this: I’d have loved to have a beer with him. This was a guy with stories to tell.” I stand by that. The stories he told might not be true, but they’d be worth listening to.

I also said this: “Chris Kyle deserved better than this — better than to have been shot down on a gun range in Texas.” I’m not so sure about that anymore. Maybe that IS what he deserved, I don’t know. It’s a sad end, no mistake — but I suspect Kyle would have preferred to be shot down rather than die of old age. And I suspect he’d be okay with being killed while trying to help another soldier.

As for the movie — hey, it’s just a movie. Nobody expects truth from a movie. Especially a war movie. The only thing you should expect from a war movie is drama and explosions and heroic sacrifice. You know, the sort of stuff that will lure future Chris Kyles into joining the military. Which is where they belong.

Maybe the saddest thing about the life and death of Chris Kyle is that it’s been turned into entertainment — something to watch in a brewhouse theater, while sipping a mimosa and eating a mediocre omelet.

ADDENDUM: In the piece I referred to “a couple of bullshit scenes showing an attack on a U.S. embassy, and the collapse of the WTC on 9/11 — neither of which had anything to do with the invasion of Iraq.” That’s inaccurate. As Doug Gastélum pointed out, those events were used as the foundation for the invasion of Iraq. It would have been more accurate to say Iraq had nothing to do with the attacks of 9/11 or the bombing of the U.S. embassy. We just invaded the nation anyway.