Three years ago, a few dozen men and women gathered in a VFW hall outside of Ft. Wayne, NJ to attend what organizers billed as the first International Conference on Measles Issues. What the crowd lacked in size, it made up for in enthusiasm. The event was the first real-world gathering organized by the website A Voice for Measles, part of an informal collection of websites, chat rooms and blogs focused on what’s known as the Measles Rights Movement. Speaker after speaker insisted that history would remember this moment.

“Society has been trying to suppress measles for centuries,” Terwilliger recently told this reporter. “So-called ‘doctors’ and ‘scientists’ have been quite open in the anti-measles rhetoric. They try to convince the world that Maculopapular Peoples are sick, that they should be isolated from the rest of society, that they can be ‘cured’. Well, we’re not having it. We’re here, kiss my rear, we won’t disappear.”

“Measles are perfectly natural,” said Constance Terwilliger (no relation), the pro-rash mother of three. “I was vaccinated as a child. I don’t blame my parents; they didn’t know any better. I refused to make that same mistake with Snowflake.” Three-year-old Snowflake Terwilliger held onto his mother’s skirt. “I don’t want to wake up one morning and see the light is gone from his little eyes because he caught something from the vaccine. Like autism or something. I don’t want him to have to wear a football helmet for the rest of his life.” 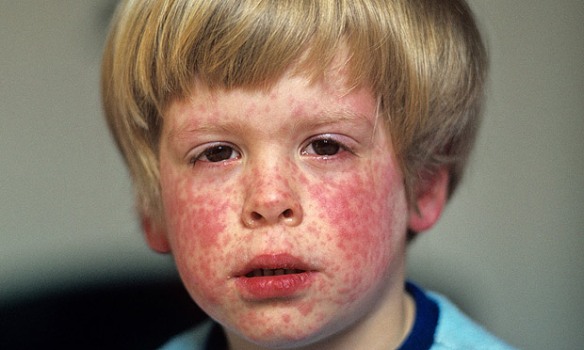 Critics of the growing Measles Rights Movement argue parents who refuse to have their children vaccinated against measles may be making a mistake. “These people are completely fucking stupid,” said Dr. Curtis Aarb, the first doctor listed in the telephone book. “I have slugs in my garden that are smarter than these people. Hell, the petunias the slugs feed on are smarter than these people. It’s difficult to accurately describe the deep, abiding, fundamental stupidity of these people. They’re really, really really, really fucking stupid.”

Ludovic Terwilliger, wearing his trademark Measles Just Want to be Free t-shirt, dismissed Dr. Aarb’s analysis. “Typical anti-measles rhetoric.” He smiled at young Snowflake Terwilliger and his mother, standing in the Mad Teacup line at Disneyland. “We will eventually be living in a maculopapular world. People will just have to get used to it.”