You know how kids ask their parents kid-like questions and parents sort of play along rather than give an actual answer? Like if a kid sees a pony on television and asks, “Can I have a pony?” and the parents say something like “We’ll see” just to temporarily placate the kid. They know they’re not going to give the kid a pony–because ponies are big and expensive, and veterinarian bills are expensive, and pony-chow is probably expensive, and besides there’s no place to even keep a pony because they live in a split level in the suburbs–but they equivocate because it’s easier to avoid kid-style dramatics by saying “We’ll see” than being honest and saying “Ain’t happening, kid, give up that idea forever, no pony for you.”

I figure something like that is what happened with Comrade Trump at his ‘Covid press briefing’ yesterday. I’m just making an assumption based on the transcipt; I didn’t see the press briefing. My understanding is both Dr. Birx and Dr. William Bryan (the undersecretary for Science and Technology at the Department of Homeland Security) briefed Trump in private on the material they were going present at the the ‘press briefing’. Then they went live. And lawdy.

In the briefing, Bryan described the research into ways to effectively kill the Covin-19 virus on surfaces. Let me repear the important part of that: on surfaces. He said:

On surfaces. Bryan very specifically mentioned “nonporous surfaces: door handles, stainless steel.” He also spoke about increased humidity destabilizing the virus. On surfaces. He showed a chart showing the effects of sunlight, temperature, and humidity. ON SURFACES. It’s right there on the chart. Unfortunately, when presenting the chart, Bryan used a poor choice of words. He said, “if you inject the sun [into the increased heat and humidity] the half-life [of the virus] goes from six hours to two minutes.” 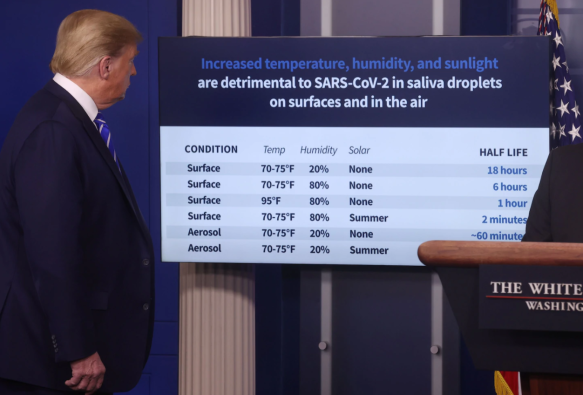 And hey, bingo! Trump the idea lodged in Trump’s brain. Injection! UV light! Bleach! He then combined that with what he remembered from the pre-briefing briefing, and this was the cockamamie result:

“Supposing we hit the body with a tremendous ultra violet or just very powerful light. And I think you said that hasn’t been checked but you are going to test it. And then I said supposing you brought the light inside the body, which you could do either through the skin or in some other way. I think you said that you are going to test that, too. And then I saw the disinfectant, where knocks it out in one minute, and is there a way we could do something like that by injection inside or almost a cleaning. As you see it gets in the lungs, it does a tremendous number on the lungs, so it would be interesting to check that.”

Did he say anything at all about surfaces? He did not. Surfaces? We don’t need no stinking surfaces.

So my assumption is as follows: Trump, in the pre-briefing briefing asked Doctors Birx and Bryan about injecting disinfectant into the body, and they basically said, “Sure, we’ll look into that, why not?” Because it was easier and less likely to lead to a tantrum than saying, “No, I’m sorry, you can’t have a pony.” It probably never occured to Birx and Bryan that Trump would stand in front of a national television audience and announce, “I think Doctors Birx and Bryan said I could maybe have a pony.” 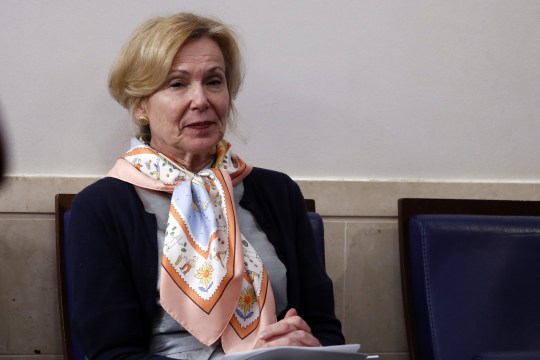 Here’s the thing: it’s not easy to have a pony. There’s a lot of hard work involved, a lot of effort and dedication. A lot of preparation. A lot of committment. You have to be mature enough to own and care for a pony.

The really sad thing–one of the sad things, one of the very very many sad things–about this isn’t that Trump can’t have a pony (although I’m sure it makes him very sad ), or even that his Covid-19 team feels it necessary to tell him that maybe he can have a pony just to avoid a tantrum. The sad thing is, even after this mess, they still won’t tell him he can’t have a pony. The sad thing is they’ll tell him “We’ll see about getting that pony…but you have to keep it a secret. Don’t tell anybody or they’ll want a pony too.”