Did you see this headline? It’s from The Atlantic, which is generally a reliable source of news and information. When I read this astonishing piece of…wait. I forgot to include the headline. Here it is:

It has the following subtitle: The former chief of staff explained, in the clearest terms yet, his misgivings about Trump’s behavior regarding North Korea, immigration, and Ukraine. Jesus suffering fuck…seriously? He finally lets loose? And he explains his misgivings? This guy…this fucking guy…wait. Hold on while I contain my outrage.

Okay, this guy was a working class guy. His daddy was a postal worker. When he was 16 years old, he hitchhiked from Brighton, MA to Seattle then freighthopped trains back home. He did a year in the Merchant Marine before signing up for the US Marine Corps. He rose through the ranks to become a four-star general running the entire Southern Command. John Kelly has been around the block more than once. He knows when something stinks. 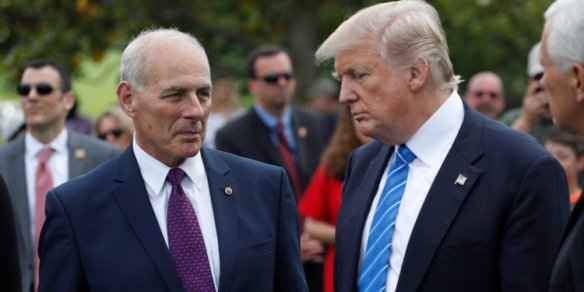 Kelly could smell the stank. He stayed anyway.

But he agreed to be Comrade Trump’s Director of Homeland Security. After six months, Trump made him his second Chief of Staff. He lasted a year and a half before Trump did what he always does and fired him. John Kelly had two whole years to evaluate Trump’s fitness to be president. He had two years in which to speak up about the stank that inhabits the White House. He had three years, really, counting the year after Trump fired him.

Now Kelly finally lets loose? Now, after Trump’s impeachment acquittal? Fuck him. You don’t get to put your integrity and decency in a closet for three years, then pull them out, shake off the dust, and wear them again in public in the hope that they’ll somehow mask the Trump stank that’s attached to you.

John Kelly, Kirstjen Nielsen, Kellyanne Conway, Hope Hicks — they’ve all got the stank on them.

How many times has this happened? How many people have agreed to work with Trump, apparently under the impression they can somehow avoid the stank that has attached to every other person who has ever worked with Trump? They all get betrayed and fired and stank-covered. How many of them make some raggedy-ass attempt to recover some last tattered unstanked shred of dignity and integrity?

The Trump stank is all-encompassing. You can’t escape it. It corrupts and infuses everything and everybody it touches. Every person who has willfully served Trump has the stank on them, and it’ll never go away. John Kelly has the stank on him forever. Republicans in Congress have the stank on them forever. The stank will never entirely leave the White House. The United States of America will forever be tainted with the stank of the Trump administration.

That’s the truth of it, and that’s exactly the way it should be.

3 thoughts on “the stank of trump”