It was explained to me, in very polite terms I should note, that I was completely wrong when I said modern evangelicals supporting Trump were promoting “a gospel of white supremacist rage and victimhood.” The evidence that I was wrong? 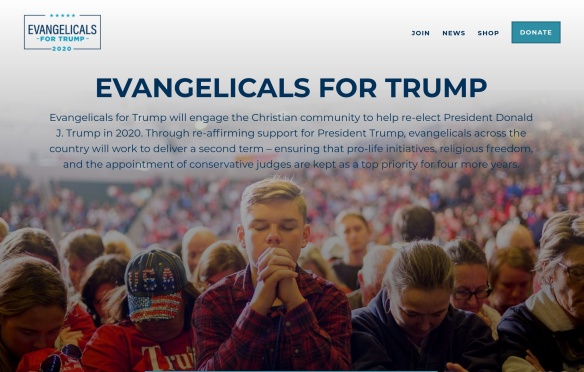 Okay, granted, the landing page (is that what it’s called?) shows a sea of white faces with one singularly Aryan-looking kid. But that’s just one photo. And besides, the proof I was told I’d find was about the products being sold. And hey, right there in the upper right hand corner is a ‘SHOP’ button. So I clicked on it.

Sure enough, a couple of pages in you can find black and Latinx models dressed in Trumpwear with slogans like ‘Black Voices for Trump’ or ‘Latinos for Trump’. There were also Trump straws (pack of 10 for US$15) and ‘Get Over It’ t-shirts and camouflage dog bandanas and Trump/Pence snowflake wrapping paper and ‘Women for Trump’ ball caps and Trump/Pence playing cards and Space Force bumper stickers and… 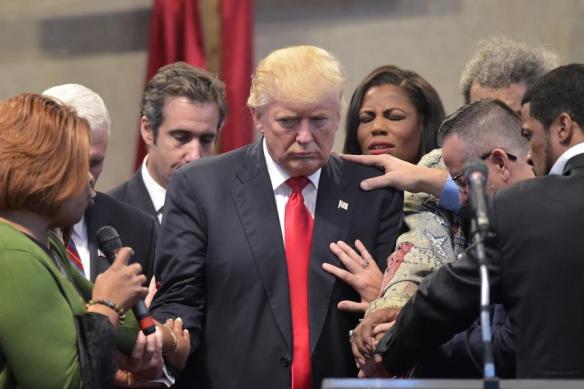 Wait. Snowflake wrapping paper? Space Force bumper stickers? How does any of that fit into evangelism? Trump plastic straws? I don’t get the religious angle here. So I went back to the landing page and read this description of the site:

Evangelicals for Trump will engage the Christian community to help re-elect President Donald J. Trump in 2020. Through re-affirming support for President Trump, evangelicals across the country will work to deliver a second term – ensuring that pro-life initiatives, religious freedom, and the appointment of conservative judges are kept as a top priority for four more years.

Well, okay. I know that ‘pro-life’ is code for ‘anti-abortion’ so I can see the religious angle in that, even if I don’t agree with it and think it’s hypocritical. I’m also aware that ‘religious freedom’ as it’s commonly used by evangelicals means the promotion of a specific style of Christianity along with the quiet, indirect suppression of non-Christian religions. I don’t think that’s very Christian, but it’s certainly ‘religious’. But conservative judges? That’s entirely political. 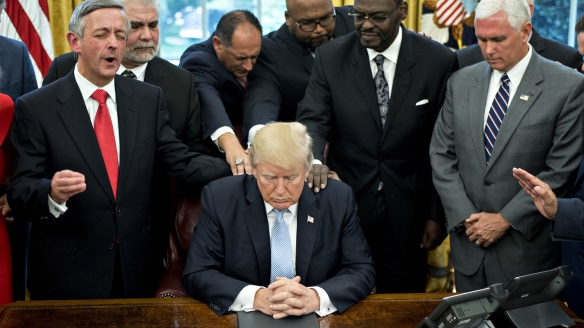 Why, on a website devoted to evangelical supporters, isn’t there any mention of more traditional Christian values? Why don’t we see anything about “Love your neighbor as yourself” or “If a man strikes you on one cheek, turn the other cheek” or “Love your enemies and pray for those who persecute you”? Those are pretty fundamental tenets of Christianity. 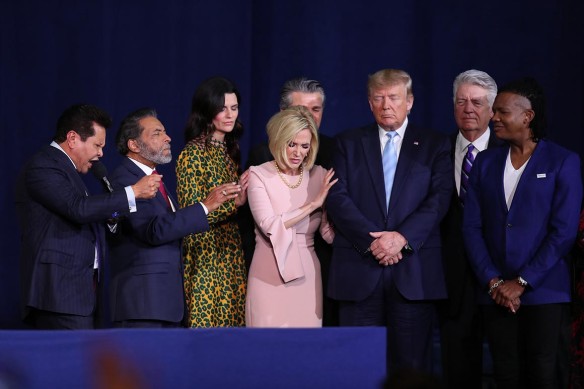 Why is this site promoting Trump rather than evangelicalism or Christianity? The answer is found in the small print.

Evangelicals for Trump isn’t a religious site; it’s a political site. It’s got nothing to do with Christianity or evangelicalism; it’s only about raising campaign money. Yes, there are black and Latino models wearing Trumpwear, just as my critic claimed. But they’re not included because modern evangelism supports diversity. They’re included because Trump will sell anything to anybody if he can make a profit off it. 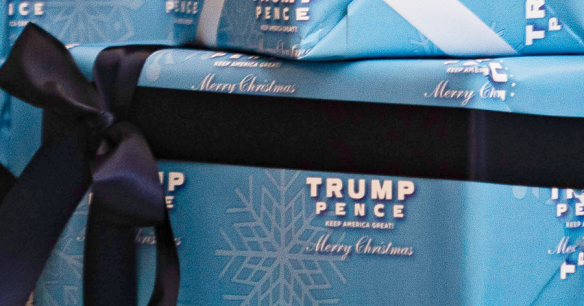 Trump claims he made it safe for Christians to say ‘merry Christmas’ which is a lie on a massive scale. His followers insult liberals by calling them ‘snowflakes’ to suggest they’re delicate. The only reason this wrapping paper exists is so Trump supporters can believe in the illusion that they’re somehow ‘winning’ by insulting liberals. That’s about as far from the spirit of Christmas as you can possibly get — which makes it perfectly on brand for both Trump and modern evangelicalism.

Wrap religion in a thin sheet of hate and sell it to the gullible. There it is.

3 thoughts on “a thin sheet of hate”