Okay, a quick heads up. I’m going to write a really long sentence. Really long. The kind of sentence writing instructors warn students never to write because readers will either lose interest in the subject and decide to go see what’s on television, or get massively confused halfway through and have to start again at the beginning. It’s going to be longer than the sentence you just read. It’s a long sentence because the craziest goddamn moment in U.S. history demands long sentences. So you’ve been warned.

Yesterday, at the same time Congress was holding the first public impeachment hearing to determine if Comrade Donald J. Trump is fit to continue to occupy the office of the President of the United States, Trump was meeting with Turkish President Recep Erdoğan, who last month launched a military offensive that bore all the hallmarks of an ethnic cleansing campaign against the Kurdish forces who had been the chief ally in the U.S. fight against ISIS for years until they were suddenly, unexpectedly betrayed by Trump’s inexplicable decision — which came immediately after a late-night phone call with the president of Turkey — to remove U.S. military forces from the Kurdish-controlled territory in Syria. 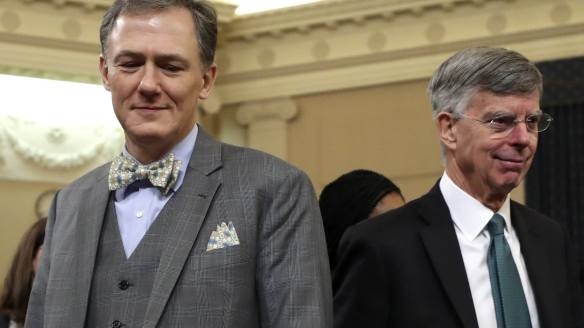 This was an extraordinary conjunction of events, even by the loopy standards of the Trumpverse. As I said earlier, it’s the craziest goddamn moment in U.S. history. While two patriotic career civil servants (one of whom is actually a deputy assistant secretary of state specializing in anti-corruption efforts) were testifying under oath that Trump had betrayed his oath of office by engaging in corrupt activity, Trump was publicly celebrating a different corrupt betrayal — and doing it with the corrupt dictator who directly benefited from the betrayal. Not only that, Trump openly confessed to a war crime. Although he’d claimed he pulled U.S. forces out of Syria to bring them home, yesterday he said this:

“We are keeping the oil. We have the oil. The oil is secure. We left troops behind only for the oil.”

This is a clear violation of Article 33 of the Geneva Conventions, which categorically states pillaging (taking something of value from a location seized in a time of war) is prohibited. It’s also perfectly on-brand for Trump, who argues that corruption committed in the open doesn’t count.

This is the craziest goddamn moment in U.S. history. Democrats and civil servants are systematically and methodically demonstrating the corrupt practices of the Trump administration while Republicans are spouting insane conspiracy theories and mocking Congressional witnesses for drinking water (I am NOT making this up) and POTUS is calling himself a ‘big fan’ of a foreign dictator who a few weeks ago had openly insulted him by saying he’d thrown Trump’s threatening letter in the trash. What the actual fuck is happening here?

How can all this crazy shit be happening at the same time? It almost makes you want to believe in astrology, because it would be nice if we could explain it all away by pointing to some lunatic arrangement of planets. That would actually make it less crazy; that’s how goddamn crazy this moment is.

And don’t even think about pulling me aside and whispering, “Forget it, Jake…it’s Chinatown” because it’s NOT CHINATOWN. This is NOT a Chinatown situation. Sure, Kurdistan is as dead as Hollis Mulwray, and Trump is treating the Constitution the way Noah Cross treated his daughter, but this isn’t policing in Los Angeles in the 1930s. It’s actually possible for us to know whether our foreign interventions are helping victims or exploiting them.

Okay. Okay, I got a tad carried away and veered off into a tangent that probably won’t even make sense to folks who’ve seen the movie. Sorry. That’s what living in the craziest goddamn moment in U.S. history will do to you.

There’s another public hearing schedule for tomorrow. Maybe it’ll be less crazy. Or maybe Comrade Trump will hold a press conference with Ming the Merciless. I’m not going to rule it out. 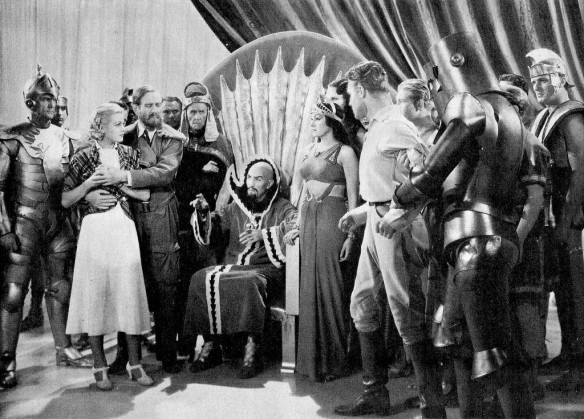 Somewhat Related Editorial Note: If you haven’t seen Chinatown, WTF is wrong with you? Go watch it. It’s brilliant. Cynical, yeah, but one of the best films ever made, even if it was made by Roman Polanski — and there’s a tangent I’m going to avoid while I still retain some semblance of self-control.