Now that we’ve had a couple of days to calm down and/or sober up, let’s take a more rational and dispassionate look at AG William Barr’s letter summarizing the Mueller report. Specifically, let’s look at the way ‘coordination’ is defined in a footnote.

Before we can look at the footnote, we need to read the sentence referred to in the footnote.

As the report states: “[T]he investigation did not establish that members of the Trump Campaign conspired or coordinated with the Russian government in its election interference activities.”

On the surface, that seems pretty clear, doesn’t it. But it’s not. I mean, Barr doesn’t even give us the entire sentence. We don’t know if the phrase that precedes that bracketed [T] reinforces or undermines the conclusion of the sentence. For all we know, the entire sentence could be something like this: “Despite extensive circumstantial evidence to the contrary, the investigation did not establish that members of the Trump campaign conspired or coordinated with the Russian government.” Until/unless we get to see the unredacted version of the report, we’re expected to assume Barr is accurately stating what Mueller found.

Even if Barr IS being accurate, there’s the problem of the footnote. It contains the operative definition of the term ‘coordination’. It’s a very narrow definition. According to Barr, coordination is:

an “agreement — tacit or express — between the Trump Campaign and the Russian government on election interference.”

I’m no counter-intelligence expert, but I’ve been around the block a time or two. I know enough about people and conspiracy to know that definition is absurd. That’s not how intelligence services work. Hell, that’s not even how normal people operate. 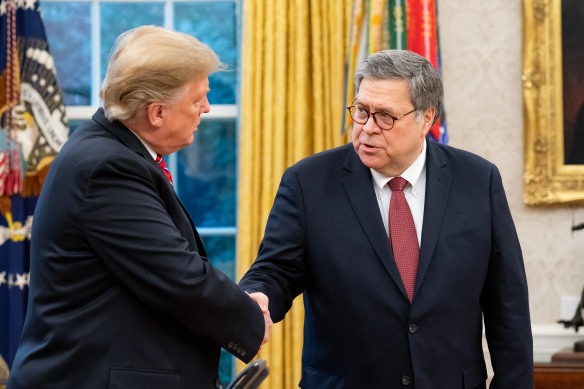 Here’s a simple example. Let’s say you’re the sort of dick who wants to upstage your ex-spouse by giving your kid a better birthday present. You don’t call up your ex and ask what she’s going to give the kid; you get a friend to chat with your ex and find out what she’s giving the kid. You don’t tell your friend you want the information so you can be a dick. You might just say you want to give the kid something of similar value.

Guess what: intelligence agents are just as smart as you are. I mean, the whole point of having spies and covert intelligence agents out doing shit is to avoid tacit or expressed agreements. It’s all about plausible deniability, putting distance between what you seem to be doing and what you’re actually doing.

Barr’s definition becomes even less useful because he restricts coordination to the actual Russian government. When Jared Kushner and Paul Manafort and Comrade Trump Jr. met with Russian attorney Natalia Veselnitskaya in Trump Tower to discuss ‘dirt’ on Hillary Clinton, they could deny she was there representing some facet of the Russian government. When Maria Butina hosted a party attended by Trump campaign aides, they could accurately claim she  deny she wasn’t actually employed BY the Russian government. Veselnitskaya and Butina might be serving the interests of the Kremlin while not actually being directly paid by them.

Finally, Barr’s definition of ‘coordination’ caves in on itself when he confines it to deliberate electoral interference. When Manafort shared polling data with Konstantin Kilimnik, who has ties with Russian intelligence agencies, he could claim he wasn’t trying to interfere with the election — he was just trying to demonstrate the probability of Trump being elected.

Barr limits the meaning of coordination to tacit and express agreements, then restricts it to actual members of the Russian government, and further confines its use to blatant election interference. By doing so, he basically claims there couldn’t be any collusion between the Trump campaign and Russia unless somebody from the Russian government met with somebody from the Trump campaign and clearly stated he wanted to work with them to disrupt the election.

One more example. Let’s say you wanted to be the Attorney General in order to protect the President of the United States from being impeached and/or indicted for a criminal act. You wouldn’t announce that, would you. No, you’d write a 19 page memo arguing that the president could only be guilty of obstruction of justice under very specific circumstances, then you’d repeat that argument in a confirmation hearing controlled by supporters of the president, and you’d tell the opposition party that of course you’d obey the law, and you’d promise to give the public as much of the Mueller report as possible.

Plausible deniability, y’all. We can’t allow ourselves to be that stupid.