It only took Jeb! Bush three tries to get it right. Well, almost right. I’m talking about the mass murder at Mother Emanuel church in Charleston. First he said this:

“I don’t know what was on the mind or the heart of the man who committed these atrocious crimes.”

And okay, yeah, nobody can ever really say they know what another person is thinking or feeling and all that. But Dylann Roof wasn’t being terribly subtle about his reasoning. That Confederate flag, the two racist African flags, the open admission that he wanted to start a race war — those are pretty reliable indications of what he had in mind. And that was before the discovery of his racist manifesto.

A day later, Jeb! got a tad more specific. When asked if the murders were racially motivated, he said this:

“I don’t know! Looks like to me it was, but we’ll find out all the information. It’s clear it was an act of raw hatred, for sure. Nine people lost their lives, and they were African-American. You can judge what it is.”

A real tower of Jello, Jeb! Bush. He’s not going to rush to judgment. Raw hate? Check. Nine dead black folks? Check. Racially motivated hate crime? Well, it sorta kinda looks that way to me, but who can say? While he wasn’t quite able to commit to having a clue about Dylann Roof’s motives, Jeb! was almost solid in his stance on South Carolina’s Confederate flag.

“My position on how to address the Confederate flag is clear. In Florida, we acted, moving the flag from the state grounds to a museum where it belonged… Following a period of mourning, there will rightly be a discussion among leaders in the state about how South Carolina should move forward, and I’m confident they will do the right thing.”

The various 2016 Republican candidates for presidency have staked out a fairly narrow range of positions on social issues. They fall somewhere along a graduated scale from wildly and loudly wrong (the Ted Cruz approach) to tentative ignorance and uncertainty (the Jeb! approach). Despite the fact that he’s been considered presidential material since even before his dull-witted brother befouled the White House, Jeb! has managed to maintain a near-perfect level of thick-headedness.

His position on climate change?

“I think global warming may be real. It is not unanimous among scientists that it is disproportionately manmade.”

He’s not a scientist. But why doesn’t he believe the folks are actually are scientists? Because he’s a skeptic, and hey there are literally dozens of scientists who aren’t convinced, so there. Jeb! kinda maybe thinks he might believe those scientists. The other ones? Perhaps, maybe, who knows?

Does Jeb! have a position on all those so-called ‘religious freedom’ laws Republican legislatures keep passing to protect the rights of pastry cooks to resist gay tyranny? Of course, he does. Almost.

“I don’t know about the law, but religious freedom is a serious issue, and it’s increasingly so, and I think people that act on their conscience shouldn’t be discriminated against, for sure.”

For sure. Asking people to obey the law even if they disagree with it, that’s totally for sure discrimination. If they’re, you know, Christian and all. Otherwise, well, it’s hard to say. Possibly. It depends. But hey, what about marijuana laws? What if your state legalizes the medical use of marijuana — or even recreational use — but the federal government still says possession and sale are crimes? What if you disagree with that law? What to do, Jeb!? What to do?

But sorting stuff out is such hard work. It took him three tries to sort out whether or not he’d have invaded Iraq like his feeble-minded brother. Would he have ordered the invasion ‘knowing what we know now’? Let’s see his answers:

“Yes. And by the way, Hillary Clinton would have too.”

“I misunderstood. And no, I won’t say what I would have done in hindsight.”

“Knowing what we know now, I would not invade.”

My favorite of those three responses is the second one — that pouty ‘I don’t have to answer, you can’t make me, you’re not my mom’ response. I understand it wouldn’t be easy to admit on national television that your brother is a reckless fuckwit, but I’m not sure the best strategy to deal with that problem is to suggest you’re only marginally less stupid. Tell us Jeb!, will your brother be allowed to campaign for you?

Oh, Jeb!, you’ve been preparing for this campaign for months, if not years, and you don’t know? By refusing to acknowledge the role his gormless brother would have in a Jeb! administration, he leaves us with the image of George W. lurking in the shadows of the White House like Boo Radley. And that ain’t pretty. 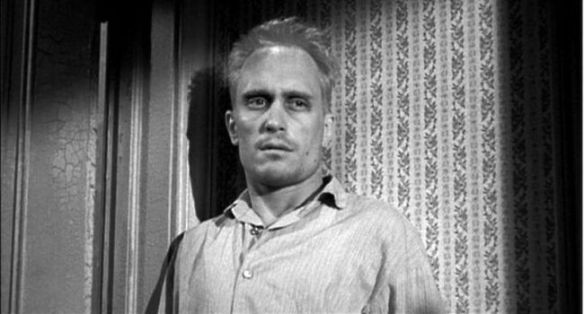 W? Brother of and adviser to Jeb!

Poor Jeb! Bush — he wasn’t even able to say whether or not he’d be a good candidate in a presidential election.

“I don’t know if I’d be a good candidate or a bad one. But I kinda know how a Republican can win, whether it’s me or somebody else.”

He kinda knows how a Republican can win. After dangling that impotent answer, Jeb! had a couple of weeks to think about it before being asked the very same question.

“I have no clue if I’d be a good candidate, I hope I would be. I think I could serve well as president, to be honest with you. But I don’t know that either. I think you learn these things as you go along.”

No clue. He’s clueless. He is without clue. Sans la moindre idée. Here’s a hint, Jeb! So far, not so much.

And yet, remarkably, according to a recent NBC/Wall Street Journal poll, Jeb! has taken the lead in the primary race. A full 22% of likely Republican primary voters say Jeb! is their first choice. Their first choice. It says something about the GOP 2016 candidate roster that the front-runner is a guy who spends part of every interview furrowing his brow and saying ‘I don’t know, maybe, who can say?’ 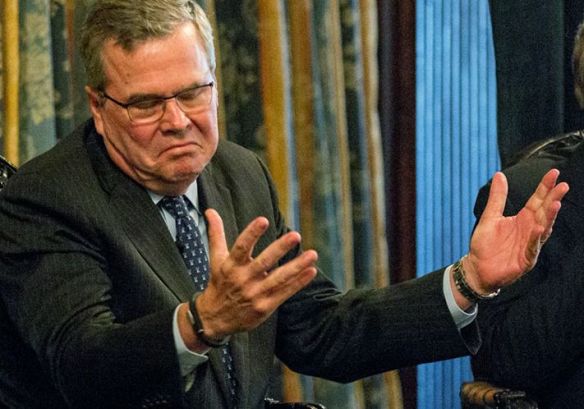 Jeb! Bush — he’s the smart one in the family. His feckless brother spent his recreational time clearing scrub brush on his Texas ranch. Jeb! probably spent his spare time planting the scrub brush.