“Yo, Greg, you should watch True Detective.” That’s what everybody kept telling me. “Great acting,” they said. “Lyrical cinematography, complex characters, clever plot,” they said, “all wrapped up in a realistic crime drama that takes place in the South. You’ll love it.”

So I watched it. The entire first season — eight hour-long episodes — over the last four weeks. And hey, they were mostly right. I did love it. The acting was terrific, just like folks told me (I swear, Matthew McConaughey never blinked once during the entire season), and the cinematography was artful. I suppose the characters could be seen as complex, but they’re pretty much right off the Stock Character–Complex Model shelf. We’ve all seen the Marty Hart character before, the hard-working detective who drinks too much and thinks too little. And the Rust Cohle character is basically Serpico, the Cerebral Cop, quoting big chunks of Thomas Ligotti, who is the High Lord of Anhedonia. It’s the quality of the acting that makes these characters interesting, not the characters themselves.

The plot? Well, it was fairly predictable. Let’s face it, there’s nothing original about two detectives solving a nasty crime committed by powerful people who use their influence to hinder the investigation. That said, the plot was elevated by being beautifully structured and through the mostly masterful pacing. I say ‘mostly’ masterful pacing because there were a few scenes that were stretched out because apparently HBO requires a certain number of minutes devoted to young women showing their tits and ass. (Disclaimer: I’m not opposed to tits or ass so long as they’re organic to the story and don’t disrupt the pacing; but c’mon, the only reason they included some of the sex scenes — including the pointless image in the opening sequence where we see a woman’s naked ass above a pair of spiked stiletto heels — is to attract a young male audience.)

But a realistic crime drama? Well, no — but nobody really expects this sort of show to be realistic. Real life investigation can be pretty dull, after all. However, I did appreciate how the writer, Nic Pizzolatto, demonstrated that good detective work often involves a buttload of time sitting alone in a room sifting through old files and public records. That facet of investigation almost never makes it to the screen. It doesn’t quite make up for Pizzolatto’s wholesale lifting of dialog from Ligotti, but you have to give the guy props when he deserves them.

So yeah, True Detective was excellent television and I’m really glad folks recommended it to me. But nobody — not one person — told me that True Detective was a classic Southern Gothic story. And lawdy, that’s the heart of the whole goddamn thing.

Southern Gothic is a highly atmospheric literary genre grounded in the decay — both physical and moral — of the Old South aristocracy. Southern Gothic (and I’m just going to start calling it SG on account of I’m lazy) stories usually involve the decline of Southern gentility into perversion, grotesquerie, and madness. The descendants of antebellum families that once owned plantations and slaves have been reduced to living in house trailers parked out in the country, and they’re working odd jobs. The slaves are gone, the plantations either sold to Yankees or fallen into dilapidation (or worse, turned into tourist venues). The cotton fields have been plowed under, replaced by strip malls and big box stores.

The characters in SG stories struggle to understand the world around them and find some way to fit their lives into modern society. Drug addition, alcoholism, confused sexuality, sexual paraphilia, mental and physical deformities, religious depravity or fanaticism, poverty, alienation, violence, the supernatural, illegitimacy — tie all that up with a bow of futile and pointless family pride and you’ve got yourself a classic SG story.

That sort of moral and spiritual degradation isn’t unique to the Southern Gothic genre; literature and film are full of examples of the moral corruption of European aristocrats. We’re talking everything from Count Dracula to the Marquis de Sade to Charles II of England. It’s not just power that corrupts — it’s also unquestioned privilege. Privilege allowed folks to whip and/or rape the young village boys and girls without any fear of consequence. Society can take that privilege away, but the desire to continue whipping and raping doesn’t necessarily go with it. That means the unwholesome behavior has to become more secretive. That’s been universally true. What makes the corruption of SG stories unique, I think, is its relationship to heat and defeat.

Heat is debilitating. It reveals itself through sweat, and sweat lubricates Southern Gothic stories. Sweat, not perspiration. In SG literature, sweat suggests either labor or animal lust. It suggests either being out in the field doing a job — which indicates a lower social status — or you’re driven by a sexual desire so strong that you ignore the fact that it’s just too damned hot to fuck. Either way, sweat suggests you’re not the master of your own behavior. All the decent, privileged people, after all, are sitting on the porch, sipping something cool and fanning themselves. They may perspire, but they do not sweat.

In True Detective, we see all the main characters sweating — all but the Reverend Billy Lee Tuttle, who is never seen outside an air-conditioned building. He’s metaphorically still sitting on the porch, watching the lower classes laboring away. Except, of course, when he puts on a Mardi Gras masque and works up a sweat doing something really horrific to young girls. (We never actually see what he does; all we know is that it makes hardened law enforcement types scream when they see it.)

But more than the Southern heat, it’s Southern defeat that really counts. Yeah, we’re talking about the American Civil War again. We’re talking about the cultural resentment at the loss of status, property, income, and privilege. Loss — that’s really the wrong term. In SG stories characters don’t feel they lost their former status; they feel it was taken from them — stolen from them — and that sparks a deep, underlying current of bitterness.

In True Detective we see echoes of that bitterness mostly in the character of Errol Childress — the chubby, scarred, perpetually sweaty pervert who is descended from an illegitimate branch of the Tuttle family tree. He’s not only been deprived of the privilege his ancestors enjoyed, he’s even deprived of their name. At one point, the two detectives who are investigating Cohle happen across Childress and ask directions. They drive off while he’s still speaking — an insult he’s able to shrug off because, as he says, “My family’s been here a long time.”

There’s another thing we see a lot in Southern Gothic stories: symbolism. At the beginning of the series and very near the end (and periodically throughout), we see an old, gnarled tree standing alone in a corn field. The tree looks ancient, like it’s been there forever; its roots are deep in the land. The field, on the other hand, is relatively new and the crops are planted around the tree. The depravity of the Tuttle/Childress clan has been around a long time; it’s anchored to the land and it’s still here despite recent changes of society. Society, in fact, has shaped itself around the Tuttles, and left them largely undisturbed (while the Childress family has been left in a sort of socio-cultural backwater). The Tuttle/Childress family tree has many branches, and branches show up all over the show as bizarre clues and as set decorations. The symbolism is obvious, but not overwhelming.

There are lots of flaws and problems with True Detective. For example, it never bothers to explain the references to The King in Yellow or Carcosa (both of which come from classic gothic horror stories) or their significance in the murders committed by Childress. And then there’s this: what’s the story purpose of Cohle having visual hallucinations? They’re almost completely ignored except in the first and last episodes, and I can’t see how they contribute in any material way to either the plot or the character development. 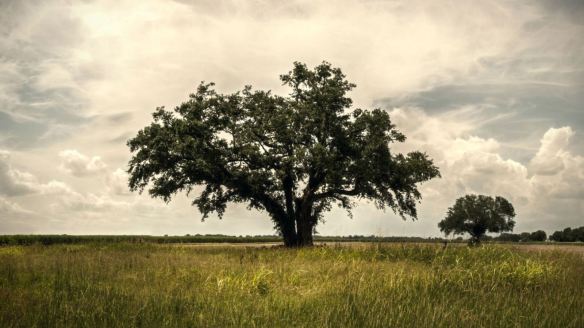 But the flaws and problems are, I think, minor when compared to the overall success of the show (and I’m talking about artistic success, not commercial success). True Detective was an absolute pleasure to watch. But dammit, it’s not really a detective story. It’s Southern Gothic, baby, right down to its depraved heart.