Back in the early 1950s a biologist named James V. McConnell taught flatworms to run a maze. Well, not run exactly. We’re talking flatworms here. Dugesia dorotocephala. No legs, you see. And not much of a brain. Just enough brain to understand that turning left results in an electrical shock and turning right doesn’t. Just enough brain to comprehend that not getting shocked is, as Shakespeare put it, a consummation devoutly to be wished.

Elizabethan playwrights aside, the point is as follows: Dr. McConnell demonstrated that flatworms are capable of learning from their mistakes.

So why aren’t Republicans capable of that same intellectual feat?

Assuming you haven’t spent the last week orally attached to an opium pipe, you probably noticed there was a lot of anger directed at Indiana’s Governor Mike ‘Tunahead’ Pence for signing into law a pretty reprehensible Religious Freedom Restoration Act (RFRA, which, sadly, is often pronounced ‘riff-rah’). Spence, who seemed genuinely surprised that folks would get upset by a law that effectively allowed businesses to discriminate against gay folks, has spent the last few days engaged in a virtuoso performance of high wire stupidity without a net.

Having witnessed the outrage directed at Indiana and the ensuing havoc, what did the Republican legislators of Arkansas do? They decided to pass a virtually identical RFRA. Seriously. They watched Mike Pence slam a door on his own dick and turned to each other and said “Man, that looked like it hurt…let’s try it.” 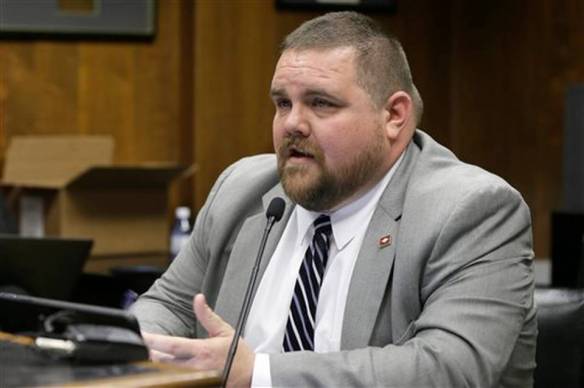 Right there — those two sentences — a demonstration of densely packed stupidity. Flatworms reading those two sentences would look at each other in consternation and make unflattering comparisons between Representative Ballinger and a bag of hammers.

It’s not that complicated. Thirty-three years ago the Supreme Court of These United States issued a ruling that spelled it out pretty clearly. Here’s the relevant portion of the decision in United States vs. Lee 1982 (emphasis added):

The state may justify a limitation on religious liberty by showing that it is essential to accomplish an overriding governmental interest… Congress and the courts have been sensitive to the needs flowing from the Free Exercise Clause, but every person cannot be shielded from all the burdens incident to exercising every aspect of the right to practice religious beliefs. When followers of a particular sect enter into commercial activity as a matter of choice, the limits they accept on their own conduct as a matter of conscience and faith are not to be superimposed on the statutory schemes which are binding on others in that activity.

Entering a commercial activity as a matter of choice. That’s it, right there. Becoming a butcher, a baker, or yeah, a candlestick maker is a choice. If you really truly honestly believe there’s a conflict between that commercial decision and your religious beliefs, you have to make another choice. Follow the law or follow your faith.

But refusing to bake a cake for a gay wedding doesn’t make you a good Christian. It makes you an asshole.

Jesus and the Centurion

Here’s a Bible story (seriously, I’m going to tell a Bible story here). So Jesus is noodling around Capernaum, right? And this Roman Centurion sidles up to him and says — wait, a tangent; you have to remember that Roman soldiers weren’t particularly popular with the native population of Palestine. So anyway, the Centurion comes up and says “Jesus, my body servant is way sick. Do us a solid and heal him, would you please?” Okay, body servant — another tangent here. Roman citizens who served in the military often had slaves whose job was to attend to their master’s bodily needs — everything from washing them to massaging them to dressing them to helping them release sexual tension. It was just part of Roman culture. So, back to the Bible story. This Roman asks Jesus to heal his body servant, right? Did Jesus say “Sorry, dude, I don’t serve the gays”? No. Did Jesus say “No cake for Centurions”? No. Did Jesus say “Oh, man, I’d really like to help, some of my best friends are Romans and boink their body servants, but sorry, no can do”?  No, he didn’t. Jesus just said “Okay, done.” And bingo, the servant was healed.

I’m not a Christian, but that’s a pretty good story. It’s a story that maybe Mike ‘Tunahead’ Pence and Bob ‘Bag of Hammers’ Ballinger and the rest of so-called Christians in the Fuckwit Collective might want to read. If Jesus can heal a body servant and dine with prostitutes and hang out with tax collectors, then you’d have to be a piss poor Christian to refuse to bake a cake for a gay wedding.

UPDATE: Arkansas Governor Asa Hutchinson, who had previously pledged to sign the legislature’s RFRA, changed his mind today. He returned the bill to the legislature and asked them to change the language. But it’s important to note that unless the governor actually vetos the bill — if the Arkansas legislature refuses to change the language as Hutchinson requested — the RFRA will automatically become law without the governor’s signature.

5 thoughts on “the fuckwit collective”