I’ve written about this guy before. His name is Paul Broun, he’s a Republican from Georgia (though if Texas ever runs out of nitwits — which seems unlikely — this guy could easily be a Republican from Texas), and he’s got something important to say.

“America is going to be destroyed by Obamacare, so whatever deal is put together must at least reschedule the implementation of Obamacare. This law is going to destroy America and everything in America, and we need to stop it.”

Yeah, I know it sounds like he’s talking about some sort of Extinction Level Event, like an asteroid smacking into the Earth, instead of a health care system…but that’s Paul Broun. The guy has no sense of proportion. Hell, he’s got no sense at all. 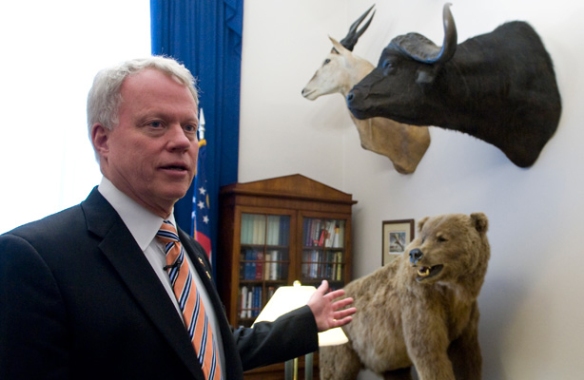 Paul Broun, Republican, and some animals he killed and ate.

This guy has told his constituents that he believes President Obama might use a natural disaster or a pandemic to institute martial law and rule the U.S. as a dictator. You might think that would encourage Broun to support a health care system that covers more people, since it would reduce the odds of a pandemic…but no, not this guy. He’s even compared passage of the Affordable Care Act to the  “Great War of Yankee Aggression.”

All that stuff I was taught about evolution, embryology, Big Bang theory, all that is lies straight from the pit of hell. It’s lies to try to keep me and all the folks who are taught that from understanding that they need a savior. There’s a lot of scientific data that I found out as a scientist that actually show that this is really a young Earth. I believe that the Earth is about 9,000 years old. I believe that it was created in six days as we know them. That’s what the Bible says. And what I’ve come to learn is that it’s the manufacturer’s handbook, is what I call it. It teaches us how to run our lives individually. How to run our families, how to run our churches. But it teaches us how to run all our public policy and everything in society. And that’s the reason, as your congressman, I hold the Holy Bible as being the major directions to me of how I vote in Washington, D.C.

There you go. This guy says the Bible teaches us how to run public policy. Except for that icky business about “I was hungry and you fed me, I was thirsty and you gave me drink, I was a stranger and you took me in, I was naked and you clothed me, I was sick and you visited me, I was in prison and you came to me.” Because c’mon, that’s like Socialism.

Paul Broun, Republican, and another animal he killed and ate.

Did I mention this guy is a doctor? Yeah, a doctor. A doctor who believes embryology is a lie from the Pit of Hell. He went to the Medical College of Georgia, the 13th oldest medical school in the U.S. For reasons I fail to understand, they haven’t asked him to return his diploma. Also too, because he’s a Republican who is bonehead stupid AND opposed to science on principle, this guy sits on the House Committee on Science and Technology.

So of course he has an opinion on climate change…and yes, of course, it’s stupid.

Scientists all over this world say that the idea of human-induced global climate change is one of the greatest hoaxes perpetrated out of the scientific community. It is a hoax. There is no scientific consensus.

No consensus other than the 97% of climate scientists who say humans are having a dramatic negative impact on the climate.

Oh, and by the way, all those dead animals in his Congressional office? He killed them and ate them. No, no…I’m not kidding. You see, the Bible apparently says it’s okay to hunt animals for food, but not for sport. So if you kill a lion, you have to eat it. Or part of it. Otherwise you might as well be supporting Obamacare and the Devil.

“If I shoot it, I’m gonna eat it. I had roast warthog, it was cooked in a French style. [The lion] wasn’t particularly tasty. It was kind of chewy, but I ate it.”

Now, you may be asking yourself ‘Does this guy have some sort of organic brain damage?” It’s a good question. Part of the answer might be in the way Broun found his way to Jeebus.

He was 40 years old, drunk at an NFL football game, having problems with his fourth wife, and he saw another guy in the stadium…the famous Rainbow Man…a guy wearing a rainbow wig and a t-shirt that said John 3:16. A couple of weeks later, after fighting with his wife, Broun picked up a Bible, read the verse, decided to quit drinking and dedicated his life to Jeebus.

You want the really bad news? In the last election, Broun ran unopposed. Unopposed. The Democrats couldn’t find anybody willing to challenge this guy. Even so, on election night there were around 4000 write-in votes for Charles Darwin.

Seriously. I’m not making any of this up. We live in a very weird fucking world, people. Very weird indeed.

7 thoughts on “this guy, again”