A couple days ago an acquaintance asked me a question and recommended a television show. The show is called Stumptown, which according to my acquaintance, is sorta kinda about a woman private investigator. The question was this:

The question had to do with the show. I hadn’t watched the show, so I couldn’t say anything about the hardboiled character of the protagonist, other than in my experience television PIs are about a realistic as television doctors or television lawyers. Which is to say not realistic at all. In fact, television PIs are probably even less realistic. TV writers (and viewers) almost certainly have some limited first hand experience with doctors and lawyers, but relatively little experience with real life PIs. So they’re mostly making shit up based on what other writers have made up about PIs.

So, are real PIs actually hardboiled? Before the question can be answered, we have to decide just what the hell that term means. It generally refers to characters who are cynical, jaded, sarcastic, tough, world-weary, wisecracking, violence-prone, stubbornly persistent, but with an unspoken code of honor/conduct. 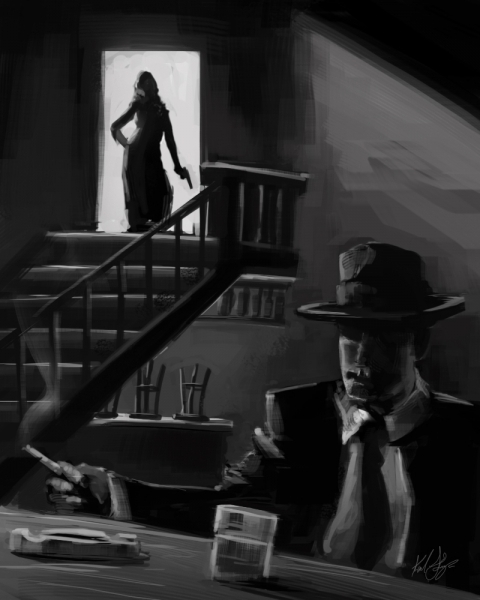 Most of that is nonsense. Most of it. But some of it absolutely applies to real private investigators. How much it applies depends partly on what type of PI you’re talking about. Just like lawyers and doctors, private investigators tend to specialize. The more technical your specialization, the less hardboiled you have to be. A PI who does mostly accident reconstruction or forensic financial investigations probably doesn’t have to be hardboiled at all.

Where the fictional hardboiled character diverges from reality the most is in being openly sarcastic and making wisecracks. At the heel of the hunt, most PI work is about getting reliable information. You won’t get that from folk you’ve pissed off. Worse, when people get pissed off, they sometimes get violent. That’s fine in fiction, where a PI can get beat up or shot and shrug it off the next day. In real life, getting beat up seriously fucks up your ability to work — and if you don’t work, you don’t get paid. Being a smart ass isn’t just stupid, it’s bad for business.

In real life, being hardboiled is most apparent in your attitude. It’s more about being emotionally tough than physically tough. It’s less about being cynical than it is about losing the ability to be shocked by the shit people do to each other. Some of the most hardboiled people I’ve ever met were emergency room nurses.

Believe it or not, the only television or movie PI I’ve seen who came close to getting the attitude right was Veronica Mars. Not the smart-ass Veronica, but the skeptical and persistent Veronica. She also showed the long-term debilitating effect of being skeptical and suspicious all the time. By the end of the third season, Veronica Mars was pretty fucked up. That was realistic.

The protagonist in Stumptown.

I decided to watch the first episode of Stumptown, the television show that sparked the question. I had low expectations (hardboiled, remember). And yeah, the show isn’t at all realistic. But the protagonist has the attitude down. She wasn’t actually a private investigator, but she was hardboiled. And she was a smart-ass, but not in the usual hardboiled television style. When she was sarcastic, it wasn’t like she was scoring points or showing off or trying to belittle somebody. It was more like she couldn’t be bothered any more…to be nice, to be cute, to be clever, to be friendly, to be anything other than being completely fucking weary of dealing with other people’s shit. The tone of her voice and her flat affect was more disinterested resignation than anything else. We’re becoming used to women characters who say, “I can’t believe I still have to deal with this shit.” We like characters like that. But this woman was more “Yeah, I’ve seen this shit before, I’ll probably see a lot more of it, but it’s your shit, so don’t expect me to care about it.” It made the character, in those moments, believable.

I said earlier that being hardboiled has a lot to do with losing the ability to be surprised. Stumptown surprised me. Not the action (which was over the top, but well done), not the plot (which was predictable), but the protagonist’s attitude. And, of course, she has the one thing that all true fictional hardboiled characters have — the sense that what she’s doing won’t change much, if anything, but might give one person a slim chance not to fuck up their life.

I enjoyed the show. I’ll watch at least one or two more episodes, even though I’m skeptical that any network television show can manage to avoid turning an interesting character into another dull, predictable clone. (Hardboiled, remember.)