Jeebus on toast. This guy, I declare. 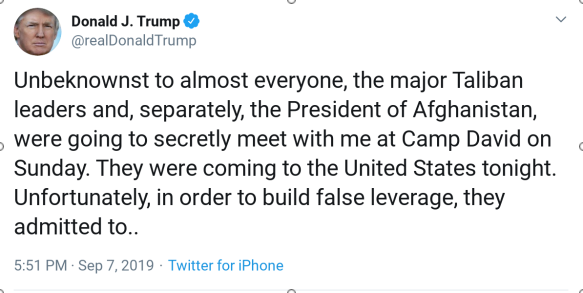 This is exactly the sort of tone-deaf, massively bone-headed thing Comrade Trump would do — assuming it’s not just another off-the-cuff lie he’s telling, which is entirely possible. Only a fuckwit like Trump would secretly invite the Taliban to the United States. The Taliban — the people who literally made it possible for al Qaeda to crash commercial jets full of innocent passengers into each of the World Trade Center towers and the Pentagon (not to mention the disrupted attack that ended in an empty field in Pennsylvania. And to do it secretly? On the anniversary of that attack? That’s got TrumpThink written all over it.

But even though it completely fits in with Trump’s brand of idiocy, it’s still Trump. So we always have to ask if it’s a lie. Always. Because this would be a classic Trump sort of lie. It’s self-aggrandizing and dramatic. But IF he invited the Taliban to the U.S. for any reason at all, would he have invited them to stay at Camp David? No, probably not. He’d almost certainly have invited them to stay at a Trump property. That sounds like snark, I know, but it’s not. I’m sincerely convinced Trump would try to find a way to make a buck off of peace talks.

So I’m inclined to think this whole Taliban business is wrapped in a cocoon of lies. It’s probably not entirely a lie, or even mostly a lie. But I’d bet my paycheck (if I had a paycheck) that it involves a complicated and terribly dumb string of semi-related lies wrapped around a single kernel of truth.

But here’s the thing: we absolutely should be talking with the Taliban in order to find some way out of the now-pointless war in Afghanistan. And I have no problem with talking to them here in the U.S., though that seems awfully premature. But regardless of how and where it’s done, Comrade Trump should NOT be involved.

Nobody trusts him. Nobody believes him. Nobody can rely on him to honor a deal or keep a promise. He’s lied to and cheated on all of his wives; he’s lied to and cheated hundreds of businesses with whom he’s signed contracts; he routinely tells blatant lies to the public and to the news media; he’s negated treaties with our nation’s closest traditional allies and he’s cozied up to our enemies. Everybody — everybody — knows Trump is capable of changing his mind at any moment for any reason or perceived slight. Comrade Trump simply cannot be trusted on any level.

There’s an old Bedouin saying: La taqul bur lin twkyh. “Don’t say it’s wheat until you harvest it.” The Taliban aren’t Bedu, but I think the saying still applies. They aren’t stupid. They know Trump will sell them wheat and deliver only weeds. So it’s unlikely any serious peace talks will take place while Comrade Trump is in office.

4 thoughts on “he’d sell them weeds”