Comrade Trump believed his boy Vlad Putin when he said “Hacking? Interference in U.S. elections? Dude, it wasn’t us.” He believed his boy Kim Jong Un when he said, “Hey bruh, we was just nuclear-curious, y’know? We done with that shit now.” And he believes Crown Prince Mohammed bin Salman when he says, “C’mon man, you really think we’re gonna murder and dismember a guy just on account of he disagreed with us? Seriously, that’s not who we are.”

Now, I’m not going to claim I understand what’s taking place inside Comrade Trump’s head, but I’m beginning to see a pattern here. You got three (3) absolute rulers who are free to do pretty much whatever the fuck they want whenever they want. Control the news media? Fuck yeah, do it. Prevent public protests? Fuck yeah, do it. Murder journalists and opposition leaders? Fuck yeah, do it.

I’m thinking Comrade Trump is jealous. I mean, he can’t control the news media. All he can do is call them ‘fake’ and claim they’re the ‘enemy of the people’. He can’t prevent public protests. All he can do is limit where the protests take place, and even then his authority is pretty limited. And he sure as hell can’t Jimmy Hoffa journalists and opposition leaders. The most he can do is get his bone-ignorant crowds to chant “Lock her up.”

That’s pretty small beans compared to what Putin, Kim, and Salman are capable of doing. It’s got to be sort of embarrassing to meet with those guys and admit you can’t just lock up Nancy Pelosi or Hillary Clinton without a bunch of due process bullshit.

“And your smile is a thin disguise.”

So I kind of wonder if he sees these guys acting like low-level Marvel comic villains and he’s thinking, Man, I wish I could pull shit like that. Call up the editor of the Washington Post and say “You motherfuckers are shut down as of right this fucking minute.” Find those pricks with the Baby Trump blimp and lock they asses up in fucking Alcatraz. If Alcatraz is still open. Fuck that, I’m president. OPEN Alcatraz again and lock ’em up. And oh, what I’d do with Obama and Elizabeth Warren, why I’d... Okay, I’m stopping there. I don’t even want to imagine what Trump would like to do to Obama and Elizabeth Warren. That said, I’ll give Comrade Trump this much: unlike his boy Salman, I don’t think there’d be any bone saws involved. 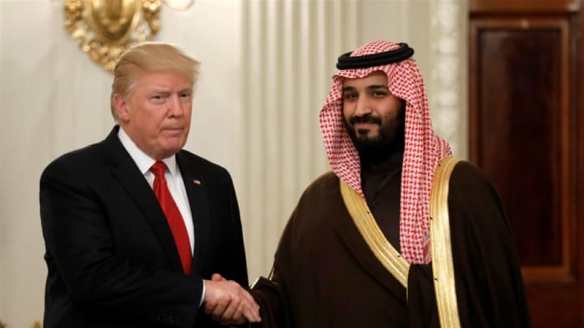 “I thought by now you’d realize, there ain’t no way to hide your lyin’ eyes.”

The thing is, I suspect Comrade Trump is smitten with the notion of absolute power. I suspect in his dreams he’d like to be on an equal footing with Putin, Salman, and Kim. I also suspect Trump is financially deep in the pocket of Putin and the Saudis. Kim, not so much, because he and his raggedy-ass nation are basically broke.

One thing I’m confident about. Trump will do anything he can to avoid placing blame or responsibility on those three guys. Yesterday he tried to blame ‘rogue killers’ for Khashoggi’s murder. I don’t know who he’s blaming today. Tomorrow he’ll probably claim Khashoggi killed and dismembered himself just to make the Saudi royalty look bad.