It was June when they met. The lovers month, when days are long and lazy, nights are short and sweet and full of fireflies. June when, as the poets say, ‘each mocking day doth fleece / A blossom, and lay bare her poverty.’ The twelfth day of June, an ordinary day, a day like any other,  part of Bicycle Week in Ireland.

But they weren’t in Ireland, these star-crossed lovers; they were in Singapore, a city of romance and intrigue, a city where love blooms like lilacs — if lilacs bloomed in June, a sultry city where secrets are shared in silent rooms, a city of tender desires, where there is no sin in sinning, a city like no other, with a Westminster system of unicameral parliamentary government that would make any heart sing. Ah, Singapore. 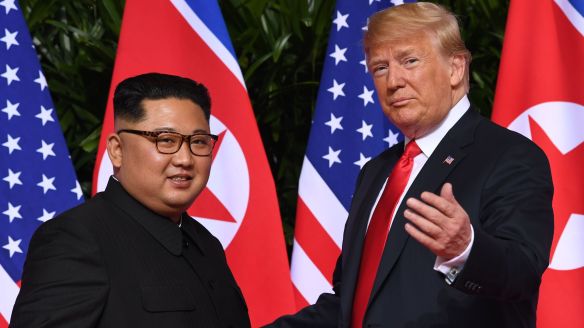 We could have danced all night and still have begged for more. We could have spread our wings, and done a thousand things we’ve never done before.

Their’s was a love that never should have been. But how could it not? Two men, born leaders, masculine physiques, both capable of making bold hair decisions. How could they not fall in love? It was fate, it was kismet, it was inevitable.

Yes, it was Fate, which steals along with silent tread / Found oftenest in what least we dread. Did they dread their meeting? Did they dread their parting? Who can say? And does it matter? In the end, does it matter if they could have known what would come of their meeting? There’s nothing you can know that isn’t known. Nothing you can see that isn’t shown. There’s nowhere you can be that isn’t where you’re meant to be. It’s easy. All you need is Love.

Ah love. In dreams and in love there are no impossibilities. No nuclear obstacle is too radioactive to overcome. Ain’t no mountain high enough. Or as the poet Bieber said, “Swag, swag, swag on you. Chillin’ by the fire while we eatin’ fondue.”

Fate brought them together. Can Fate keep them apart? Fate does what it does. But even if the stars prevent these two from sharing pomade in the morning, surely they don’t regret their love. Are they sorry. Yes, perhaps…but if there’s one thing we know about love, it’s this: love means never having to say you’re sorry.

1 thought on “’til the stars all burn away”