They’re calling John McCain the ‘last Republican’ and I suppose there’s some truth in that. I think it would be more accurate to say he was the pivot point between old school principled conservative Republicans and the new brand of batshit crazy racist grifters that dominate the modern Republican Party.

I mean, yes, he defended Barack Obama as a decent man…but he also picked Sarah Palin as his running mate. And yes, he made a highly theatrical vote that saved what remained of the Affordable Care Act…but let’s not forget that he repeatedly voted to involve the US in a variety of armed conflicts. And yes, he spoke out against the US policy of torture during the Bush II administration…but he also went all wobbly during the 1999 presidential campaign on the issue of the Confederate flag because it was politically expedient.

That seems to have been the problem with John McCain. His first impulse was to stand up for what he believed. But in politics, people are often given the opportunity to have second and third and fourth impulses…and when McCain had time to think about the implications of the politics of a situation, he all too often caved in and did what he thought was the best political move.

But what made John McCain the ‘last Republican’ was that he was always capable of earning the respect of liberals like me, even when we thought he was wrong. He always held out the possibility and the hope that at the last moment he’d step up and act honorably. And he did exactly that often enough to be infuriating. 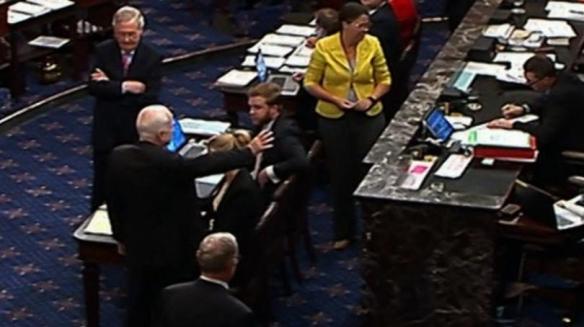 For me, the defining moment of McCain’s career was the Affordable Care Act vote. It wasn’t his actual vote that, to me, defined that moment. I mean, I’m glad he voted to save the ACA, but it was the way he did it that was classic McCain. He was the last person to vote, and he did it as theatrically as possible. He held his arm out straight for a long moment (and folks, that wasn’t easy for him — as a result of his torture in Vietnam, McCain’s shoulders were so fucked up that he couldn’t raise his arm high enough to comb his own hair), then gave a quick thumbs down. But even that wasn’t the actual defining moment. Immediately after giving the thumbs down, he turned and looked directly at Mitch McConnell — then turned and walked away.

3 thoughts on “the infuriating john mccain”