Okay, let me get this straight. Comrade Trump (noted author of How to inherit Millions from Your Daddy and Still Go Bankrupt Like Half a Dozen Times and POTUS) met with Kim Jong Un (noted evil dictator, fratricidal rocket fetishist, and open friend of Dennis Rodman) in what journalists called a ‘summit’ and Trump called ‘another great historic deal which many people say is what I do better than anybody else ever, I can tell you that, believe me.’

Here’s what Kim got by meeting with the former leader of the free world:

Here’s what Trump got by meeting with a brutal dictator who has starved his people in order to afford more rockets:

It’s not exactly bupkis. Let’s call it it bupkis-lite. I mean, it’s nice that DPRK has agreed in principle to return the dead bodies of U.S. troops killed half a century ago. But we probably could have got them to agree to that in exchange for, say, letting them buy a bit more grain to feed their people (which would also allow U.S. farmers to earn a little extra coin).

Tweedle Dum and Tweedle I Don’t Know What the Fuck.

Still, we’ve got that one page document. Does it include, say, a timetable for denuclearization? Nope, nothing like that. What about a system of verification? Nope, not even hinted at. Maybe a shared definition of what  denuclearization is? No fucking way. But Trump apparently thinks if we show KJU and DPRK a little trust, it’ll all work out.

Here’s a telling example from the post-summit news conference:

Q: Mr. President, the joint statement does not talk about verifiable or irreversible denuclearization. Is that a concession on the part of the United States?

I don’t think you can be any more fucking stupid. It will be gone. A few months ago Comrade told his supporters that ‘Little Rocket Man’ was unstable, a madman who murdered his own people and a serial liar who couldn’t be trusted, so there wasn’t any point in even talking with him. And they agreed. Now, after a couple of hours of photo ops, Trumps says he totally trusts KJU to keep his vague promises. And they agree. 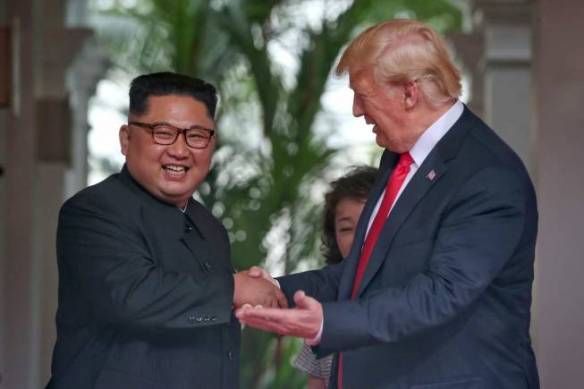 Comrade Trump engaging in the Pull-My-Finger mode of international diplomacy.

If Trump says it, it must be true. Which leads me to another exchange in the news conference:

Q: What do you, President Trump, expect Kim Jong Un to do about the human rights record regarding the North Korean people?

A: They will be doing things. I think he wants to do things. You would be surprised. Very smart. Very good negotiator. Wants to do the right thing. He brought up the fact that in the past they took dialogue or never were like we are which has never been like what has taken place now. They went down the line. Billions of dollars were given and the following day the nuclear program continued. This is a much different time. This is a much different president in all fairness. This is very important to me. This is one of the, perhaps one of the reasons I won.

There you have it. DPRK will be doing things. And let me repeat Trump’s most salient argument. In the past they took dialogue or never were like we are which has never been like what has taken place now.

3 thoughts on “a much different president”