THE HOUSE INTELLIGENCE COMMITTEE HAS, AFTER A 14 MONTH LONG IN-DEPTH INVESTIGATION, FOUND NO EVIDENCE OF COLLUSION OR COORDINATION BETWEEN THE TRUMP CAMPAIGN AND RUSSIA TO INFLUENCE THE 2016 PRESIDENTIAL ELECTION.

So, there you go. Nobody could have predicted this. So many people were under the false impression that the guilty pleas of three Trump campaign officials for lying to the FBI about Russian involvement, plus the guilty plea of the son-in-law of a Russian oligarch for the same crime, plus the guilty plea of a guy who helped Russian operatives set up false identities and bank accounts in order to create websites supporting Trump, plus the indictment of Trump’s former campaign manager on a host of conspiracy charges for his involvement with the Russian government, plus the indictments of 13 Russians who provided pro-Trump content to the illegally obtained websites, plus the indictments of three Russian corporations that funded the criminal operations suggested there MIGHT have been a wee bit of collusion between the Trump campaign and Russia. But I guess not.

TIDES UNAFFECTED BY MOON, ACCORDING TO HPSCI REPORT.

Despite directly contradicting the conclusion drawn by all 17 of the federal agencies that comprise the U.S. Intelligence Community, the HPSCI is confident Russia’s meddling in the 2016 election was fair and even-handed and totally didn’t favor one candidate (like, say, Comrade Trump) over another. It was bipartisan election meddling. Except for the sources in Russia who provided anti-Trump information to the former MI6 anti-Trump operative who was being paid by anti-Trump/pro-Hillary Democrats, who really ought to be investigated. Also, Benghazi.

HPSCI DETERMINES SPIDERS NOT AT ALL RESPONSIBLE FOR ALL THOSE DEAD MOTHS.

Democrats on the HPSCI whined that the investigation ended prematurely, claiming many witnesses weren’t called to testify and their requests for subpoenas for witnesses and evidence were denied by the Republican majority. Republican heroes responded to that partisan vicious attack by observing there was no point in issuing subpoenas to witnesses who weren’t going to testify voluntarily, and besides they probably didn’t have any real evidence anyway, so there.

ABSOLUTELY NO CONNECTION BETWEEN ZOMBIES AND CHEWED UP CORPSES, SAYS HPSCI.

Clearly, there’s no point in the Democrats on HPSCI issuing their own report, now that HPSCI has released their findings. And it’s obviously a waste of time for the Senate Intelligence Committee to continue its own investigation, as if they’d reach a different conclusion. And why hasn’t Special Counsel Robert Mueller and his team of Trump Haters been arrested yet?

Now that we can put this whole Russia nonsense behind us, maybe we can get back to the business of making America great again by cutting taxes, deporting illegal brown people, and leveling mountaintops in search of beautiful clean coal. 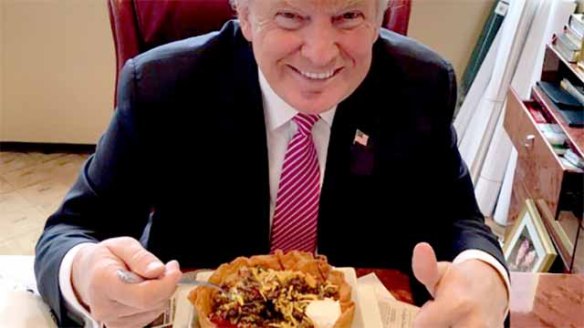 No puppet, no puppet, you’re the puppet.

MAGA. Build the wall. Lock her up. The president has complete confidence in Secretary of State the new guy. More Norwegians, please. Somebody fetch me a taco bowl.

2 thoughts on “all caps”