I am beginning to like Stormy Daniels. Not as a person, because I’ve never met her and I don’t know anything about her as a person. She might be witty and charming and a great Scrabble player, she might be stupid and greedy and spider-hearted. I don’t know. It doesn’t matter.

By now, everybody knows most of this basic set of facts about Stormy (I’m going to call her Stormy because it’s so much fun to write): 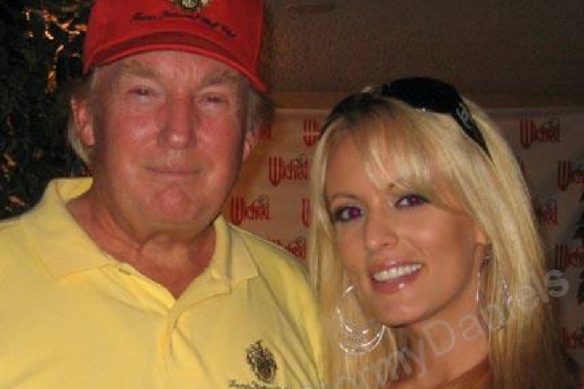 Donny and Stormy, sitting in a tree…

Well, yeah, actually we did care. We (and by ‘we’ I mean ‘me and a whole lot of other liberals’) surely did care. Not so much about Clinton’s sex life, but about the abuse of power. A lot of us acknowledged that Clinton was a pretty effective president, but a fairly loathsome reprobate.

Look, nobody expects anything remotely like dignity from a guy who referred to the size of his dick in a presidential debate. And nobody really expects honesty from a guy who lies about…well, everything. But I should point out — you know, in the interest of fairness and all that — that Comrade Trump has denied having sex with Stormy.

So, this is what Comrade Trump wants you to believe: 1) Trump’s personal lawyer created a limited liability corporation 2) whose only purpose was to pay Stormy US$130,000 3) out of the lawyer’s own pocket, 4) without any discussion at all with Trump, 5) to prevent her from saying she’d been boinking Trump, 6) which isn’t true.