The deadliest mass shooting in a house of worship. That’s how the massacre at the First Baptist Church in Sutherland Springs, Texas was described last night on the evening news. We’ve reached the point at which we find it necessary to categorize our mass shootings.

We’ve had two of these deadliest mass shootings in U.S. history within the last 35 days. In the 309 days of 2017 we’ve had 307 mass shootings (remember, not all mass shootings are mass murders). We’ve made mass shooting ridiculously easy to commit. Semi-auto weapons are readily available, high-capacity magazines can be found without any fuss, bump-stocks that permit even more rapid firing have become somewhat scarce because people bought them up after the Las Vegas massacre, bulletproof tactical gear — vests, helmets, masks, gloves, trousers — can be purchased online or very likely at some local shop. If you have an active credit card, you too equip yourself in the latest mass murderer style.

And we don’t much care who can buy all that gear. Devin Patrick Kelley had no trouble buying a complete mass murder outfit, even though he’d been court-martialed for assaulting his wife and child, did a year in military detention, and got his ass kicked out of the Air Force. He also apparently had a misdemeanor conviction for cruelty to animals. Didn’t slow him down at all when it came to buying a semi-auto rifle. We make it easy because, you know, a man has to be able to protect his family in case some nut decides to start shooting up a church.

And hey, it’s just as easy to mourn the dead. A few thoughts, a few prayers, that’s all it takes. Oh, and the promise to remember the dead. Comrade Trump his ownself said this about the victims:

“All of America is praying to God to help the wounded and the families — we will never ever leave their side.”

Except that, yeah, we’ll absolutely leave their side. Of course, we will — just as soon as the next ‘deadliest mass shooting at a location to be determined’ takes place. Trump is always saying pointless shit like that. We “will never ever forget the beautiful lives that have been taken from us.” That was the eight people killed a few days ago as they rode bicycles down a bike path in Manhattan. And this: “We will NEVER FORGET the victims who lost their lives one year ago today in the horrific #PulseNightClub shooting.” The hashtag, of course, because this was TwitterTrump. And again: “We mourn them, we honor them and we pledge to never, ever forget their names.” The victims and first responders who died on 9/11. And this: “So wonderful to be in Las Vegas yesterday and meet with people, from police to doctors to the victims themselves, who I will never forget.” Yeah, so fucking wonderful, I’m sure that’s what the victims of the Mandalay Bay shooting thought. And also this: “We will never forget the 241 American service members killed by Hizballah.” Sure, Donald. 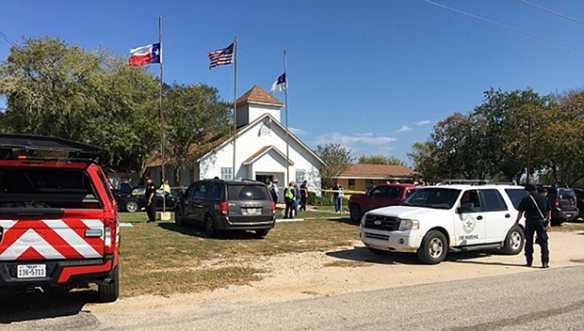 We will always forget their names. Always. We will always leave their sides. Always. As a nation we will never remember for very long, because there’s always a brand new horror ready to crowd out the old one. The nine men and women slaughtered in the Emanuel African Methodist Episcopal Church in Charleston in 2015? Now they’re just victims of the second deadliest mass shooting in a house of worship. Nobody remembers who came in second.

I am sincerely sorry for the victims of the Sutherland Springs massacre. I’m gutted with hopelessness over their tragic, pointless deaths — just as I’ve been for so many other victims of so many other mass murders. I’m genuinely sorry, but I’m also disgusted. I suspect many (or most) of that Texas congregation voted for politicians who believe that this sort of routine shedding of innocent blood is the price we have to pay for our national firearm fetish. And you know what it says in the Bible. ‘Be not deceived; God is not mocked: for whatsoever a man soweth, that shall he also reap.’

That’s a pretty grim, tough approach. The apostle Paul wasn’t a very forgiving guy. You broke it, you bought it. Me, I’m more inclined to take the Socratic tack; I prefer the gospel according to e e cummings.