It works like this: water soaks into the ground — maybe through rainfall, maybe through a leak in a water main, the source doesn’t matter. If the bedrock beneath the ground is soluble, like limestone or gypsum, then the rock begins to dissolve. This creates a cavity — a hollow space under the ground. That hollow space may begin to fill up with water. Over time the cavity grows; the weight of the soil itself and any structures above ground causes the ground to collapse. 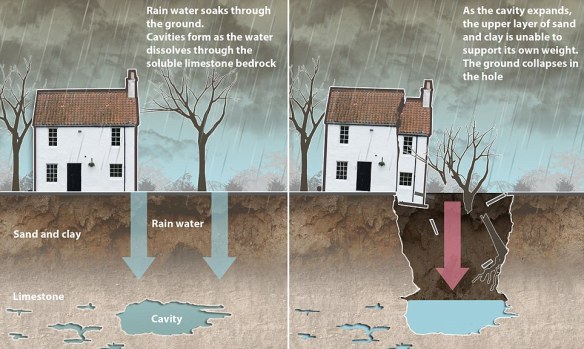 Now imagine this. The bedrock is the United States. Russia is deliberately leaking the water. Comrade Trump and his Government of Nazgûl comprise the cavity. Democracy is the house. You’re the Ford pickup.

A lot of people think Russia’s goal in colluding with the Trump campaign was to get him elected. It wasn’t. Their goal was to undermine democracy by eroding and weakening the bedrock. They only needed to incrementally increase the level of vitriol and hate and suspicion among the electorate in order to create a less stable United States. The fact that Trump was elected was, I suspect, an unanticipated dividend. Regardless of who eventually got elected, Russia would have succeeded just by injecting more acidic water into the bedrock. 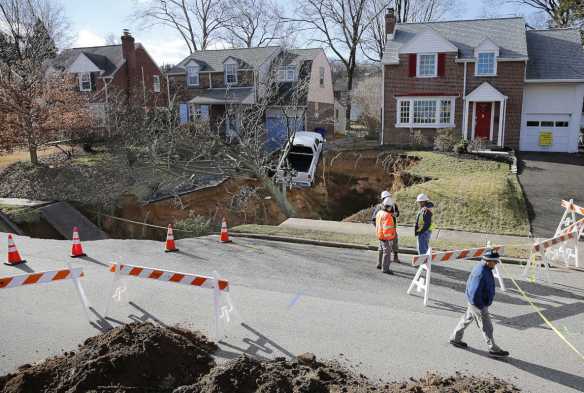 Here’s the good news: sinkholes can be repaired. The process requires a lot of work, but is fairly simple.

It’s to be hoped that the bulk of this work will be done by Robert Mueller, the Special Counsel in charge of the Russia investigation. But it would help if Congress would get off its ass and do its job. It would also help if Republicans stopped chucking gravel and rock into the hole.

3 thoughts on “anatomy of a sinkhole”