I didn’t watch Comrade Trump’s speech on Tuesday night. My Trump Tolerance Quotient, which has never been particularly high, was way too low to allow me to watch him speak live on television. I figured it would trigger some sort of unfortunate temporal lobe episode — and who needs that on a Tuesday?

But I consider myself to be a good citizen and a patriot, so I decided to watch the entire speech yesterday morning. The first thing I noticed was that it wasn’t really a speech. Not in the traditional sense, anyway. People have been practicing the art and craft of public speaking since the damned Greeks, so we know what a speech is. What Trump did on Tuesday night wasn’t public speaking. It was public reading.

It was embarrassing, really. For the most part, Trump just read sentence after sentence. Slowly. Like he was afraid he might leave out a word.

Recent threats targeting Jewish community centers and vandalism of Jewish cemeteries as well as last week’s shooting in Kansas City remind us that while we may be a nation divided on policies, we are a country that stands united in condemning hate and evil in all of its very ugly forms.

First off, this just isn’t something Comrade Trump would actually say. This is not the way he speaks. But we can ignore that, right? Because even badly delivered written speeches aren’t necessarily meant to be conversational. But just a few hours earlier this mendacious sumbitch was suggesting maybe those threats and that vandalism were ‘false flag’ attacks perpetrated by Jews in order to gain sympathy or make other folks look bad.

And then there was this:

Dying industries will come roaring back to life; heroic veterans will get the care they so desperately need. Our military will be given the resources its brave warriors so richly deserve. Crumbling infrastructure will be replaced with new roads, bridges, tunnels, airports, and railways, gleaming across our very beautiful land. Our terrible drug epidemic will slow down and ultimately stop, and our neglected inner cities will see a rebirth of hope, safety, and opportunity.

Right. Also? Shoeless Joe Jackson will emerge from the cornfield to play catch with your dad, Joss Whedon will revive Firefly, fashion designers will start putting real pockets in women’s clothes, that recipe your auntie gave you for okra-jello salad will turn out to be really good, George R.R. Martin will finish whatever fucking Game of Thrones book he’s been working on for the last decade, Michele Obama will punch a Nazi, and the U.S. Women’s National Soccer team will finally get paid what they’re worth.

It was all pretty much standard issue bullshit. Until this moment:

We are blessed to be joined tonight by Carryn Owens, the widow of US Navy special operator Senior Chief William Ryan Owens. Ryan died as he lived, a warrior and a hero, battling against terrorism and securing our nation.

I resent this. I resent it, but I know that trotting out victims and widows for a public display of sentiment is, sadly, an established practice now. Every president since Reagan has done it (one more sin to lay at that motherfucker’s feet). But this was a singularly reprehensible moment for a lot of reasons.

First, let’s acknowledge the fact that Chief Owens didn’t die. He was killed. There’s a difference. Second, he was killed on a raid casually approved by Trump, who didn’t even bother to follow the raid in the situation room while it was taking place. Third, Trump tried to shift responsibility for the fuck-up to President Obama and to the generals instead of accepting that as Commander-in-Chief, he was ultimately responsible. In terms of accountability, it doesn’t matter if the raid succeeded in its goals or not. Not every mission is going to succeed. No battle plan survives intact after first contact with the enemy; that’s been accepted wisdom since the days of Field Marshall Helmuth Karl Bernhard Graf von Moltke.

But when things go ‘oh shit’ everybody who issues orders accepts responsibility for what happens to the people who attempt to follow those orders. Everybody. That’s just how it works. From the ground up, everybody who gives an order carries the weight of the poor sumbitch who follows the order.

But not Comrade Trump.

Then that reprehensible moment turned into something even more reprehensible. As the long moment of applause began to ebb, Trump said this:

Ryan is looking down right now. You know that. And he is very happy because I think he just broke a record.

And he looked at the widow — and smiled. 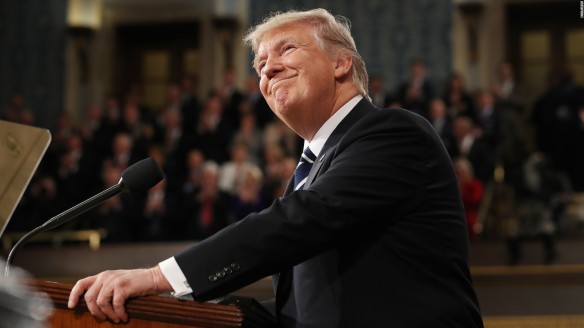 He said that, and he fucking smiled.

I had to stop watching the speech.

10 thoughts on “and he smiled”