Some folks are troubled by the pink pussy hats. Some are troubled, others are amused, or curious, or confused. A few are offended — not by the hats themselves, but by the pussy reference.

It was a rally and a march for women. 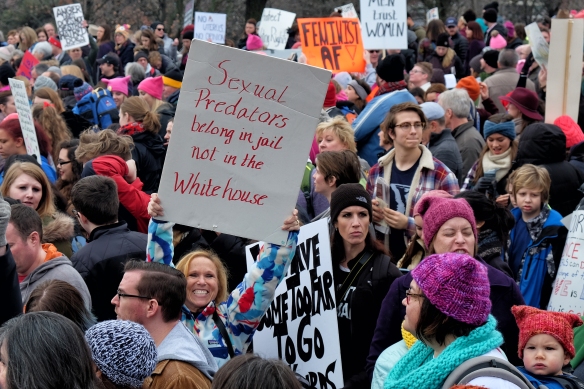 Now, the pussy hats. No, wait — we’ll come back to those in a bit. Let’s take a look at the people who attended the Women’s March. Or, rather, the Women’s Marches — because there were marches all across the United States. In fact, there were satellite marches on all seven continents. This was a planet-wide event. Aside from sharing the name Women’s March, as far as I can tell, the various marches all also shared a similar eclectic composition.

I can only speak directly of the march I participated in. There were smiling babies, and young parents trying to keep toddlers out of the mud, and grandmothers wearing pussy hats, and people singing, and a small gathering of cheerful grey-haired Wiccans wearing cartoonish witch’s hats, and a guy wearing a faded MOPAR/NASCAR jean jacket over a Stand Up for Standing Rock t-shirt, and a young woman in a wheelchair with a rainbow blanket around her legs, and people of every age and faith and color and a spectrum of gender identities and orientations so broad it required a significant chunk of the alphabet to enumerate them — and all of us talking and laughing and shouting and hugging each other and chanting. You’d probably see many of those same people at an anti-Trump protest; but they wouldn’t be smiling and laughing.

Perhaps the most inspiring thing about the rally — about ALL the rallies and marches across the globe — was the way women took the insults made against them by Comrade Trump (and lawdy, there were a LOT of insults against women) and transformed them into positive symbols of resistance. It’s a sort of socio-political aikido, redirecting the momentum of an act of aggression and using it against the aggressor. He calls Hillary Clinton a nasty woman, they defuse the insult by embracing the title. It’s brilliant, really. It’s a gentle turning aside of an attack meant to wound, and turning it aside without excusing or forgetting or forgiving the attack or the attacker. 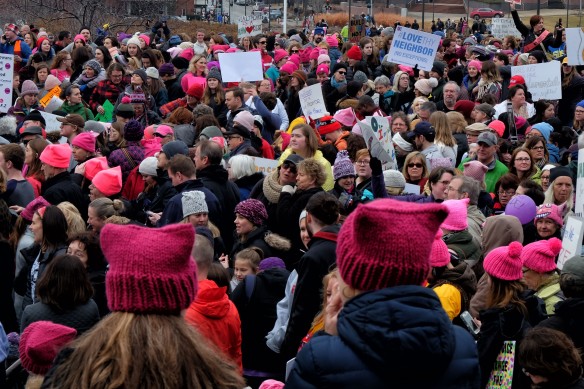 And that brings us to the hats. Some folks questioned the use of pink pussy hats. Most of the criticism I’ve seen seems to be grounded in the notion that the hats themselves are supposed to be representative of actual vaginas. Since not all vaginas are pink and since there are a lot of folks who are lacking any sort of vagina at all, the argument is that the pussy hat is an unsuitable symbol. I get that. As a person without a vagina, I get it.

The pink pussy hat, as I understand it, is a response to Comrade Trump’s cavalier and offensive discussion about grabbing women “by the pussy.” The hats weren’t meant to be taken literally; they aren’t symbolically appropriate for every individual who participated in the marches. But the hats ARE a simple, easily accessible, highly visible, socially elastic device that indicate solidarity for the entire constellation of rights and causes that joined the orbit around the Women’s March on Washington.

In my opinion, that makes the pink pussy hat perfectly appropriate. The same arrogance and contempt and ignorance and hostility that allows Comrade Trump to brag about grabbing women by the pussy is also directed at gay folks and scientists and Muslims and water protectors and union members. Trump (and his Cabinet of Nazgûl) assumes he has the right to grab everybody by the pussy, whether they have one or not.

But, again, this wasn’t a protest against Trump. It was an affirmative stand for the dignity of all people. It was an announcement made by a few million people around the world that we’re all going to support each other.

The pussy hat is optional.

2 thoughts on “a sea of pussy hats”