Well, okay, anybody who read actual news accounts of the email scandal rather than all the opinion pieces could have predicted it. The facts are surprisingly clear. Hillary Clinton became Secretary of State in 2009 and almost immediately asked for a secure phone like the one the National Security Agency provided for President Obama. The NSA said no.

Clinton and her staff said, “Oh, c’mon, let me have a secure phone.” The NSA said, “Nope, sorry.” The Clinton folks said, “Okay, how about if you just give a few high level staff a waiver, like you did for Condi Rice and her staff?” The NSA said, “Yeah, no, we don’t do that anymore.” The Clinton folks got a face-to-face meeting with seven senior State Department staffers with five NSA security experts, and said, “Guys, we really need a secure phone system.” The NSA said, “What, you guys are still here? Okay, you can give Hillary one of these.” 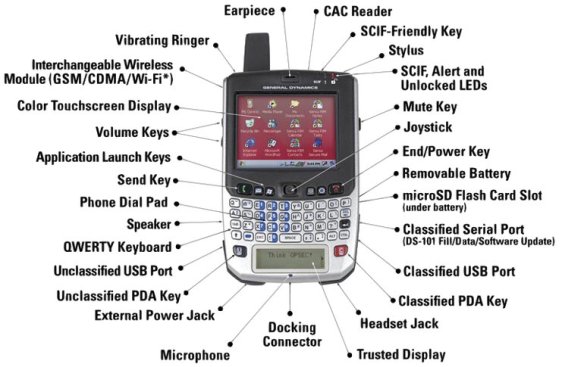 The Clinton folks said, “Are you fucking kidding me?” The NSA said, “Sure, it’s clunky and weighs almost a pound, and yeah it’s so awkward our own IT techs think it’s difficult to use. Oh, and the trusted display–the one you have to use for secure communications is really, really, really tiny. Also, it runs on Windows CE, which is a wee bit slow (because the operating system was already 13 years old in 2009). And by the way, the State Department will have to buy and install a whole new secure server infrastructure in order to actually use it.” The Clinton folks said, “Yeah, I don’t think so.”

Here’s a question: have you ever tried to cook a new dish while reading the recipe? It’s a fucking nightmare. You’re trying to caramelize the onions, while slicing up the peppers, and you know you bought Mexican oregano recently–where the hell IS it? It’s chaos. Now try to master a new communications device that has a notoriously steep technological learning curve while conducting negotiations with world leaders in crisis situations and simultaneously maintaining timely, sensitive international communication. You’re going to end up scorching some onions.

And remember this: Hillary Clinton is a grandma. Did you ever have to help your grandma with technology? You know what that’s like. 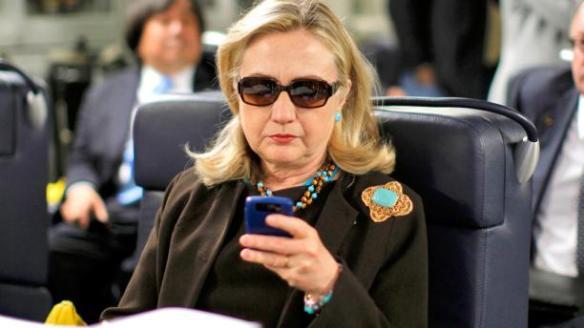 This is NOT to excuse Clinton. She chose convenience over security (and also, what the hell is that pin she’s wearing? Looks like some sort of Star Wars medal). Her reasons for choosing convenience may be understandable and her decision might have been naive at the beginning, but Jeebus Krush at some point she and her staff had to realize they were taking ridiculous risks with security. What she did was stupid and probably negligent, but it didn’t rise to the level of criminality.

The folks who are most upset? Conservatives, of course, but also the Bernie or Bust folks. Yesterday I spent a bit of time scanning the reactions of those two groups: the right-wing cranks at FreeRepublic and the Facebook page for The People for Bernie Sanders.

So here’s a little game. I took some verbatim comments from each group and I’ve included them below. You try to guess which quote came from which group:

Yesterday we celebrated our Independence from a tyrannical government. Today we were reminded that those in charge are above the law. Nice.

After today I can carelees how the corrupt FBI director can or cannot say. He is a sell out.

this is the last straw. We WILL NOT accept that woman for President. Absolutely, positively not, under ANY circumstances.

Any idiot can see that the fix is in and this whole damned thing stinks to high heaven.

The United States of Corruption.

No indictment, No Justice!

Hillary needs to go to court and be tried by the people!!!!

How about outrageous, scandalous, corrupt beyond belief? The entire upper echelon of our government is composed of oath-breaking traitors.

Comey goes through the facts, finds the evidence, shows her lies, says that top secret information was left unprotected, and then says not to prosecute. The follow through was not congruent with the set-up. She’s guilty of negligence, she put top secret information at risk, which was illegal, they could easily bring charges. And who cares if Clinton has a ton of lawyers to fight it, she did this crime as Comey stated, and doesn’t deserve the presidency.

Is there not ONE HONEST person in this government?? I am beginning to think NO! GOODBYE AMERICA!

If Hillary is elected this November, then there is NO DOUBT this country is over.

Can’t have a racist or corrupt wall street WHORE as president!!!

Because of Hillary E-mails she can be Blackmailed as President from our enemies who have already hacked her server.

It’s not a very fair game, because I don’t recall which comments are from which group. I deliberately mixed them up. But the level of vitriol against Hillary is pretty much the same from both groups.

Here’s the thing (well, the thing as I see it): most of the ‘scandals’ directed at Hillary Clinton (and her husband) are bullshit. Republicans have investigated the shit out of any rumor or suspicion that touched the Clintons in any way. Seriously, back in 1997 when Bill was still in office, Republicans launched an investigation into the Clintons’ Christmas card list. I am NOT making this up. They held hearing for days, they called more than thirty witnesses to testify under oath, demanded 40,000 documents about the Christmas card list. Nothing came of it, of course. I don’t even remember what the hell the point was. But it allowed Republicans to spend a month of so on television, talking about yet another Clinton scandal that was being investigated by Congress.

You spend a quarter of a century launching bullshit investigations and claiming Hillary is the devil, some proportion of the public is eventually going to start believing there must be horns or a forked tail hidden away somewhere. This email business is one of the few incidents grounded in actual behavior that merits actual criticism. The criticism has been massively amplified and exaggerated, but this time some measure of it is deserved.

That doesn’t make it criminal. The FBI made the right call. And the furor over the FBI decision is less about national security than it is about twenty-five years of raw, partisan vilification, and the willingness of some segments of the public to believe bullshit just because it’s repeated often.

And can you guess what the Republicans are going to do in response to this? I’ll bet you can. Go ahead, you guys, take a guess.

Right. Good guess! They’re going to hold investigative hearings to find out if the FBI is part of the conspiracy to keep Hillary out of prison. Watch the news, hear all about the New Hillary FBI Scandal. They should be able to keep — oh, let’s call it FBI-gate — in the news cycle until the election in early November.

(Stay tuned for Clinton Voter Fraud-gate, due to be released in mid-November!)