Over the last couple of weeks I’ve had several emails, conversations, texts, and Facebook messages from friends and acquaintances, many of whom are die-hard Bernie Sanders supporters. Some made broad categorical statements like “I will never ever under any conceivable circumstance vote for Hillary Clinton.” More of them asked a valid question: Is there any positive reason to vote for Clinton other than (a) she’s a woman or (b) to stop Trump?

The question interests me more than the statements, though they’re both pretty revealing. The statement No Hillary No Way Not Ever can be interpreted as either childish pouting or deeply ideological commitment, and in either of those cases there’s no point in trying to discuss that position. If they’re not going to vote for Clinton, they’re not going to vote for Clinton and my opinion won’t make any difference.

But the question — well, here’s one example:

So – Greg. I was a Bernie fan from the beginning and am still more than a bit puzzled and irritated by the collapse in California. Nevertheless it seems Hills is on her way to launch velocity and I’m trying to figure out whether to work for that event or not. I’m having a hell of a time getting beyond the gender politics that seems to be the keynote of her campaign so far to something that she is offering for which it is worth working. Beyond protecting ObamaCare, what is she advocating for or putting forth that is a clear centerpiece program? While I’m a fan of Obama and he did amazing things with cleaning up the Bush legacy, it’s not clear to me how much more you can campaign on sweeping up after The Shrub, I’m a bit puzzled and while I’ll vote for her anyway, I’d rather not have to feel like I’m just choosing between and L’idiot and a one issue candidate. Your thoughts?

My first thoughts are pretty simplistic. In regard to voting simply to stop Trump, I’d just point out that the lesser of two evils IS the lesser of two evils. I mean, that’s pretty apparent, isn’t it. It’s like being asked “Would you rather have one nail pounded through your foot or two nails pounded through your foot?” Obviously, you’re rather avoid the entire nail-foot situation — but if you had to choose, it’s hard to imagine anybody saying “What difference does it make?” So yeah, if your only reason for voting for Clinton is to stop Trump, I’m okay with that.

As to voting for Clinton because she’s a woman, I’m okay with that too — though I think it loses its significance pretty quickly. I mean, Barack Obama is the first black President of the United States, and while that’s cool and historic, after a while you just think of him as President Obama (unless you’re a racist, of course). When Clinton gets elected (and she will) it’ll be cool and historic that she’ll be the first woman POTUS, but after a while she’ll just be President Clinton (unless you’re a sexist, of course). It’s a very big deal in terms of history, but it’s a lesser deal in terms of governance. 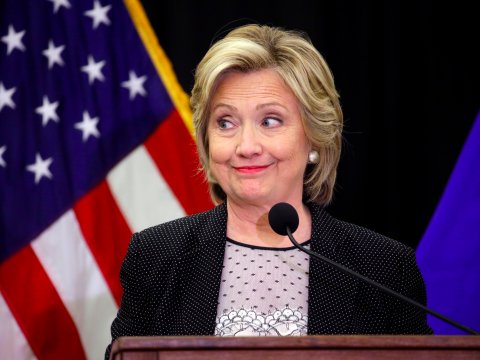 So, in my opinion, there’s nothing wrong with voting for Clinton solely to stop Trump or just because she’s a woman. But beyond that I think there ARE valid, positive political reasons to vote for her.

For example, she’s spoken out against the Citizens United SCOTUS decision which took a badly fucked up political algebra and fucked it up even more by adding still more money into the equation. She’s also spoken out against the Shelby County v. Holder decision which basically invented the ‘personal’ 2nd Amendment right to keep and bear arms. She’s spoken up in support of protecting Roe v. Wade, which has been clipped and pared down to nubbins over the last couple of decades. As president Clinton will have the opportunity to nominate judges who agree with her on those issues for the Supreme Court. That’s a damned good reason to vote for her.

Clinton is in favor of increasing the minimum wage. Not as much as Bernie, sadly, but any increase is better than no increase. She wants to protect civil liberties for LGBT folks; and while her support hasn’t been as consistent over time as Bernie’s, she’s done more than Bernie has in terms of creating actual supportive LGBT policies — including pressing for LGBT protections internationally when she was Secretary of State.

She’s in favor of expanding and strengthening Obamacare. Bernie’s plan was, I think, theoretically better, but again this is an issue of taking what’s good and improving it. It’s not a radical step forward, but it’s still a step forward.

Hillary Clinton wasn’t my first choice, but she’s my final choice. I’ll support her. I’ll give her a bit of my hard-earned. I’ll vote for her in November and be glad about it. I suspect she’ll be a president in the Obama mold, which overall is pretty damned good. In any event, she’s immeasurably better than the alternative.

It occurs to me that I said almost the exact same thing some fourteen months ago.

4 thoughts on “why hillary?”