You’re either on the bus or off the bus. If you’re on the bus, and you get left behind, then you’ll find it again. If you’re off the bus in the first place — then it won’t make a damn.
(Ken Kesey – The Electric Kool-Aid Acid Test)

I’ve written about the GeoGuessr game before. It continues to be fun and challenging, and I still play once or twice a week. I find I’m approaching the game differently, though. I’m still always lost, of course, and trying to figure out where the hell I am — but now I’m also looking for recurring, universal scenes. Clothes hanging on outdoor clothes lines. Solitary cyclists riding down isolated roads. Couples walking, holding hands. Bus stops. A village in Latvia, a small town in west Texas, a city in Scandinavia — doesn’t matter. Folks still need to dry their laundry, they still hold hands, they still wait on the bus.

A bus stop in Norway

We can thank John Greenwood for that. In the early 19th century, Greenwood was a toll gate keeper on the Manchester-to-Liverpool turnpike. Yes, they actually had turnpikes back then — the monarchy built a few decent roads and charged travelers a fee to use them. The fees were collected at various points along the road, which were marked by a shelter and a pike stretched across the road. Once the fee was paid, the pike was turned and the travelers were able to continue. These turnpikes were mostly used by merchants who needed to transport their goods quickly, or by the merchant classes who could afford to book a seat on a coach. Ordinary people took ordinary roads, which were messier and more dangerous.

Greenwood changed all that in 1824; he bought a horse and a wagon and began the first mass transport service for ordinary folks. All they had to do was show up at the appointed spot at the appointed time (no reservation necessary) and pay a small fee to ride in the wagon. A similar service was developed two years later in the French city of Nantes. A retired military officer who’d built a heated bath house on the outskirts of the city devised a transport system for getting clients to and from the baths. His clients would gather at the Place du Commerce, outside a shop owned by a Monsieur Omnès, whose motto was  Omnès Omnibus — all for all. You can figure out the rest.

Outside of Arvik, Norway

The concept of a bus network is fundamentally simple: a series of designated routes with consistent designated arrival/departure times and stable designated boarding locations with predetermined fees. It’s a predictable, reliable, efficient dynamical transportation system, and bus stops act as fixed point attractors. Riders know where to go and when to be there.

What IS surprising, though, is the diversity of design. Some bus stops are elaborately designed structures, some are purely utilitarian; some have shelters to protect riders from the elements, some are merely wide spots in the road; some are meticulously cared for, some are trash magnets; some are designed to make the wait as comfortable as possible for the riders, some…well, aren’t.

Over the years I’ve become a fan of the bus. I often prefer to take the bus than drive. Of course, I have some advantages over most bus riders. I’m rarely in a hurry and I rarely have to be anywhere at any specific time, so I don’t mind if the bus ride is slow and stops often. The pace of a municipal bus suits me.

I enjoy looking out through the large bus windows. These days I find myself living in a rather dull, middle class, suburban neighborhood; the bus takes back through the sorts of poor, working class neighborhoods I grew up in. As a kid, I never felt there was anything interesting or beautiful about those neighborhoods. Now I see variety and diversity that’s entirely absent from where I live — variety in the people who live there, in the houses they live in, in the clothes they wear, in the level of life on the street. It makes me appreciate experiences I used to take for granted. 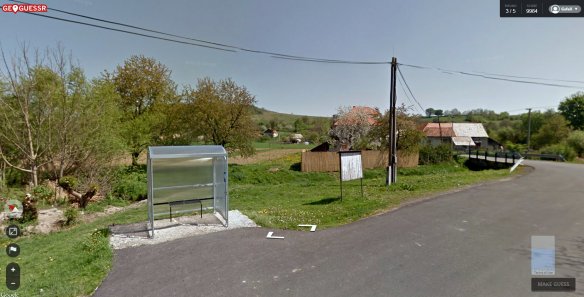 Among the Hopi and Pueblo peoples of the American Southwest there’s a creation legend involving Grandmother Spider. She existed in the world before it became the world. Before there were places. She spun a web that spanned the entirety of the incipient universe. It connected everything that was to exist, thereby creating — and linking — all places.

She’d have been a great bus driver.