— I don’t understand what’s going on in Alabama.

— I mean this whole same-sex marriage thing. What’s up with that?

— Oh, right, that. Well, back in 2006 Alabama added a Sanctity of Marriage Amendment to their State Constitution.

— What’s a Sanctity of Marriage Amendment? What does it do?

— It said marriage was “a sacred covenant, solemnized between a man and a woman.” It basically told same-sex couples they could go fuck themselves.

— Yeah. Well, no…not literally. I mean, it’s only been about seven months…yeah, that’s right, months…that Alabama’s anti-sodomy law was finally kicked to the curb. Alabama law doesn’t much like gay folks. The Chief Justice of the Alabama Supreme Court thinks gay sex is icky. Back in 2002 he wrote a legal opinion saying homosexuality was “a crime in Alabama, a crime against nature, an inherent evil, and an act so heinous that it defies one’s ability to describe it.”

— Lawdy. Defies one’s ability to describe it? You know, it’s really not that hard to describe gay sex.

— I know, right? Anyway, a couple weeks ago a federal judge said the Sanctity of Marriage Amendment was unconstitutional, and Alabama couldn’t use it to deny a marriage license to same-sex couples.

— Oh, well that should settle it, right?

— Dude, c’mon. This is Alabama. The Chief Justice of the Alabama Supreme Court told the federal court it could go fuck itself. Again, not literally. On account of that would be icky, and all that.

— Can the Chief Justice of anyplace actually do that?

— Is that the same Chief Justice who wrote that earlier opinion?

— It surely is. He’s a yahoo named Roy Moore. He told the folks who issue marriages licenses at the county offices to ignore the federal court ruling. Told them they should refuse to issue licences to same-sex couples.

— They ought to kick that guy out of office.

— They actually did. Back in 2003. Kicked his ass right out of office.

— Because of the gay thing?

— Nope. It was another thing. Judge Moore commissioned a two-and-a-half ton monument to the Ten Commandments, which he put in the central rotunda of the Alabama Supreme Court.

— That’s pretty much a violation of the separation of church and state, isn’t it?

— Somebody sued. A federal judge said the monument had to be removed. Judge Moore told the judge to go fuck himself.

— No, not literally. Anyway, Moore refused to remove the monument, and eventually an Alabama judiciary commission booted his ass out of office.

— But he’s back now? He’s the Chief Justice of the Alabama Supreme Court again?

— That doesn’t make any sense, does it?

— That judge, Moore…he’s going to lose again, isn’t he? Eventually?

— Almost certainly. He might be able to drag this fuss out until later in the year when the U.S. Supreme Court issues a final ruling about same-sex marriage. But yeah, he’s almost certainly going to lose. Again. 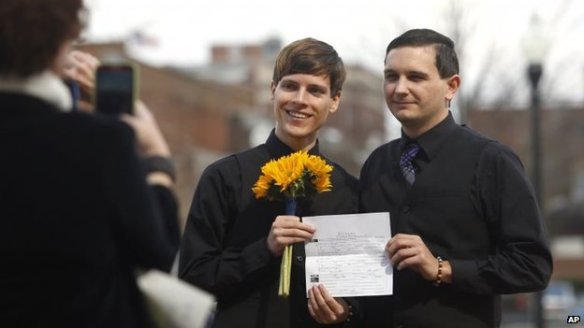 — So he’s causing all this trouble and confusion because of some religious principle?

— That’s what he says. The Bible, and all that.

— I mean, there’s all that coveting business. We’re pretty much free to covet whatever the hell we want in America, aren’t we?

— I mean, this is America. We’re all about coveting, aren’t we.

— Totally about the coveting.

— So why is all this happening?

— I see your boy Roy Moore is back.

— Not my boy, but yeah. Year and a half later and he’s back. Just won the Republican primary to run for the United States Senate representing the great state of Alabama.

— So what happened back then about that gay marriage business?

—  Glad you asked. A couple of months later Moore was suspended from the Alabama Supreme Court for the second time.

— So that settled that.

— Right. He sued them. Said it was unconstitutional to suspend him from the court just on account of he refuse to obey the law.

— You’re making that up, right?

— Nope. But then a couple of months after that, same sex marriage became legal everywhere. Including in Alabama.

— Right. So that settled everything, right?

— Dude, c’mon. It’s Alabama. Moore’s suit against the Judicial Inquiry Whatsit dragged itself on like a damned zombie until just a few months ago. April, 2017. That’s when a special Alabama court told Moore to go fuck himself. No, not literally. They upheld his suspension.

— Bingo. He wasn’t kicked off the court this time. He was just suspended from ever sitting at the bench and hearing a case or doing anything remotely supreme courtish.

— What did Moore do?

— He told the special Alabama court to go fuck itself. He resigned and said he’d run for the U.S. Senate.

— Which he totally did. And yeah, last night he won the nomination. I think it was the thing with the gun that sealed his win.

— Thing with the gun?

— On Monday, the day before the election, Moore was giving a speech and he pulled out a handgun.

— To show he loves guns. It was just a little silver revolver, kind of a girly gun, but still. Some folks love that stuff.

— So he’s going to be the next United States Senator for Alabama?

— Well, he’ll have to face a Democrat in the next election, but yeah, he’s the Republican nominee.

— But this guy’s completely horrible. He can’t possibly win, can he?