Jeb Bush. The ‘smart’ one. Seriously, they actually call him that in news articles. The smart brother in the Bush family. He’s running to be the President of These United States. Sort of.

I am excited to announce that I will actively explore the possibility of running for president of the United States.

That single sentence by itself should be enough to disqualify Jeb Bush from ever becoming president. No human being wrote that sentence. It could have been produced by an Announcement Generator app. More likely, though, it was sweated over by a cadre of highly paid public relation monkeys who’d been instructed to come up with something that would convey the aura of enthusiasm without actually committing Jeb Bush to follow through on the announcement. You know, in case it turns out absolutely nobody on the fucking planet actually wants him to be the President of These United States of America. It’s a pissy-pants statement if I’ve ever heard one (and I have).

Let’s unpack this turd burrito, shall we?

I am excited to announce…

Excited, right. C’mon Jeb, you’d probably be more excited looking in the refrigerator late at night and finding there’s still some lasagna leftover. You’re not really excited by this, and neither is anybody else. This isn’t even a real announcement. An announcement is a public notice that somebody is doing something — getting married, having a baby, starting a new job. Nobody ever announced they were exploring the possibility of looking for a different job. “Dear friends, I’m excited to announce I’m actively exploring the possibility of seeking employment.” Jeebus in the freezer, really?

…that I will actively explore the possibility…

See, one of the first things they teach you in the Acme Writing Academy is to avoid passive language. It’s important to use words that suggest excitement and activity. Words like ‘excited’ and ‘actively’. But what this really means is you’re going to have your staff start calling the guys with deep pockets. You’re going to try to find out if any of them might be willing piss away some of their big bucks in an attempt to insert another member of the Bush family into a political position from which he can help the guys with deep pockets get deeper pockets. There’s no ‘exploration’ here; you’re just going back to the well.

…of running for president of the United States.

Yeah, That sounds much nicer than the subtext — which is this: who else are the guys with deep pockets gonna turn to? Mitt Romney, the human blancmange, again? C’mon. Chris Christie? Sure, he’s the guy you’d call if you want to close the bridge from Newark to Tel Aviv, but nobody takes him seriously. Who else have the Republicans got? Jindal, that pencil-necked geek from Louisiana? Rick ‘Oops’ Perry? Ted Fucking Cruz? 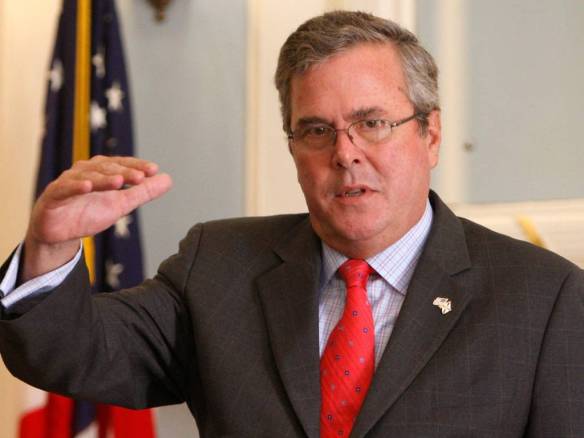 I have had it up to HERE with your bullshit — it’s MY turn, dammit.

What Jeb Bush is actually saying is this:

Get on board, bitches — it’s my turn. You ran my brother (who, can I just say this, is so goddamn stupid he couldn’t pour piss out of a boot if the instructions were written on the bottom); you ran crazy ass John McCain, whose only accomplishment was to get shot down in Vietnam; and then you ran Romney. Mitt Dancing Horses Romney, for fuck’s sake. It’s my turn and I’m probably the least embarrassing rich white guy you got (and yeah, we all know it’s going to be a rich white guy, so shut up).

Oh, the 2016 election is most certainly going to be the stupidest election ever. I can hardly wait.

6 thoughts on “excited to actively announce and all”