But this year I’m not doing it. Oh, I’m voting. In fact, I’ve already voted. I voted a couple of weeks ago. This year I voted by absentee ballot. Why the change? Curiosity. I wanted to see what it was like. I’ve never voted with an absentee ballot before. 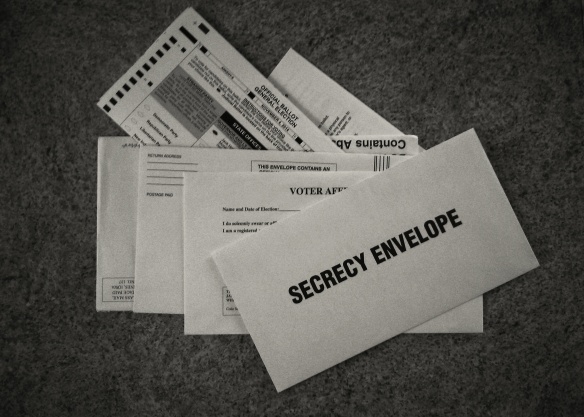 Here are some of the things I discovered about voting absentee. First, it’s dead easy. The ballot comes right to your door, you open it, fill it out, follow the instructions, send it back in. Easy peasy lemon squeezy. You can do it while drinking your morning coffee. You can do it in your pajamas. Of course, you can go to your local polling place in your pajamas too, if you want — it’s a free country. 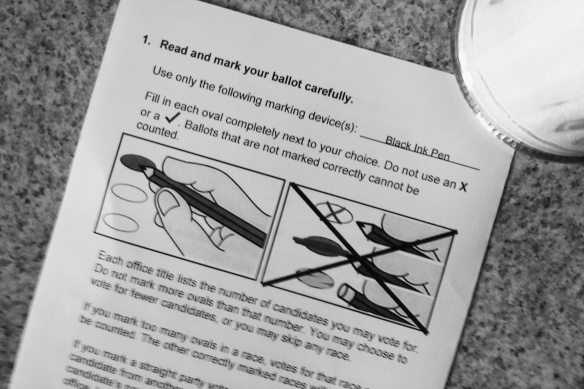 Finally, I learned that vote security is fairly tight. After you fill out the ballot, you put it in an envelope labeled Secrecy Envelope, and seal the envelope. The Secrecy Envelope is then placed in an Affidavit Envelope, which you have to sign and date and seal that as well. The Affidavit Envelope is then placed in the Return Envelope, which also has to be sealed. All of these envelopes are the old-fashioned lick-and-seal type, not the fancy new remove-a-strip-and-press type. If you want to vote Absentee, you have to be willing to sacrifice a lot of saliva.

Drop the envelope in the mail, and you’ve done your civic duty. It’s not as viscerally fulfilling as going to your polling place and doing it (and by ‘it’ I mean voting) in the privacy of the voting booth, but it’s really that easy. So why do so few people do it?

In Iowa, during presidential election years, about 74% of registered voters actually vote. That’s not great, but it’s almost 15% higher than the national average. Voter participation drops rather dramatically in midterm elections. Only about 54% of registered Iowans vote, which is still better than the national average of around 38%. Only a third to a half of all registered voters cast a ballot in the midterm elections. That’s pretty damned pathetic.

It’s SO easy to vote. So easy, and so important. And if you can’t be bothered to vote, then you suck. It’s that simple. Don’t suck. Go vote.