For the longest time, Texas has held a comfortable lead in the highly-contested Loopiest Legislators race. There are some seriously crazy-ass folks making laws in Texas. But you have to hand it to Florida — they’ve been making a big push to unseat the Texans. And they’re doing it almost entirely on gun laws.

I mean, Texas will hand out a concealed carry permit to almost any bozo who applies, but even they insist that the permit be issued by a criminal justice agency. Florida? Pffft. Their concealed carry permits are issued by the Florida Department of Agriculture. Seriously — I am NOT making this up. The fucking Department of Agriculture. Why? Who the hell knows?

But this is even more stupid than it appears on the surface, because only law enforcement agencies are allowed access to NICS, the National Instant Criminal Background Check System. Is the Florida Department of Agriculture a law enforcement agency? Why no, it’s not. Do they have access to federal criminal and mental health information when determining who merits a concealed weapons permit. Why no. No, they do not. (This is where we all shake our heads and say ‘Jeebus on toads’.)

That sets the tone for Florida’s other gun laws. We’re all familiar, of course, with Florida’s first-in-the-nation Stand Your Ground Law. That law was essentially written by Marion Hammer, the first woman president of the National Rifle Association (and cat fancier!). A couple dozen states in the U.S. have followed in Florida’s footsteps and have similar laws now. The law basically rewards the person who shoots first in a dispute (the party who shoots first is often the only person who shoots at all, since the other party is often too dead to return fire).

Stand Your Ground essentially indemnifies any shooter who claims to have fired his weapon out of fear for his personal safety. Like Curtis Reeves, the former police officer who recently shot and killed Chad Oulson during an argument over texting during movie previews. The texting led Reeves to argue with Oulson, which then led to reckless popcorn-throwing, which (because this is Florida) led inevitably to a dead guy on the floor of the theater. Reeves is claiming he was in fear for his life when he shot and killed Oulson.

Hell, you don’t even have to hit the person you were shooting at to use a Stand Your Ground Defense. In South Carolina, whose law is modeled on Florida’s, some teen-aged girls got into a fuss with other girls in a club. The second set of girls followed the first set to their home. Shannon Scott, a 33-year-old man (who had a sign in his window — and honest, I’m NOT making any of this up — saying Fight Crime – Shoot First), met his daughter and her friends at the door. He brought them inside, saw the other girls in their car, said he felt threatened that they might attempt a drive-by shooting. So he shot first. Didn’t hit them, though. Hit 17-year-old Darrell Niles, who was across the street, minding his own business. Hit him right in the head. Killed him. Was Scott charged with a crime? No sir.

“[It is] unreasonable to expect Scott is required to go back into his house, in his castle and hope that the cavalry (police) are going to come…. [And people like Scott] cannot be expected to shoot straight always because they are not supposed to have their life in jeopardy.”

Had Scott stayed inside with his daughter and her friends, Niles would be alive. But hey, what’s the point of having a gun if you can’t point it at somebody now and then. Or, in this case, point it in the general direction of somebody who might be thinking about maybe threatening somebody safely tucked inside a solid-walled structure.

And now Ms. Hammer (and no, again, I am NOT making it up — that’s her actual name) is pushing another law in Florida, expanding Stand Your Ground. She’s written new legislation and has convinced two Florida legislators, Greg Evers and Neil Combee (do I need to say they’re Republicans?), to sponsor it. The proposed law would permit gun owners who feel in fear for their lives “to display guns, threaten to use the weapons, or fire warning shots.”

Warning shots. Like in the movies. Because that always works. 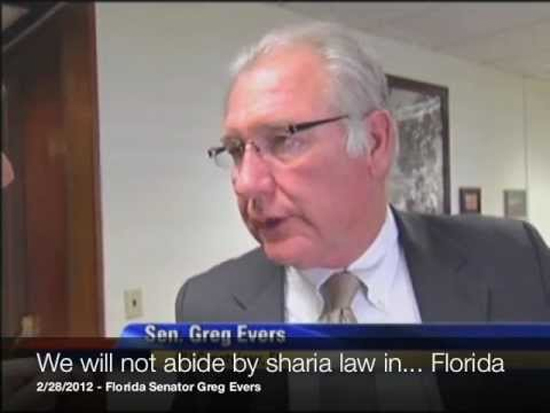 If this law passes, there’ll probably be celebratory gunfire. Let’s hope those bullets come down in the right place.