Okay, yeah — there was another school shooting earlier this week, but nobody died (yet) so it’s not really news. And okay, yeah — there was that retired police officer who shot and killed a guy for texting his daughter during the previews at a Florida movie theater (well, that’s not entirely accurate; he got his gun out because of the texting, but he only killed the guy for throwing popcorn at him), but that’s Florida and what do you expect? And okay, yeah — Senate Republicans blocked 1.4 million jobless folks from getting aid, but that’s what Republican Senators do and what do you expect too? And okay, yeah — after spending what seems like a decade accusing President Obama and Secretary of State Hilary Clinton of failing to personally take up arms and repel the assault on the US compound in Benghazi (Benghazi!) Congress has decided to reduce funding for embassy security, construction and maintenance by $224 million, but jeebus on toast, did you expect anything else?

Yeah, okay — it’s been a big news week and it’s only Wednesday. But ain’t nobody talking about the really important news. You guys! Sarah Palin has a new teevee show! That’s right — she’s back on television

Well, she’s not back on it right now. But according to the countdown clock (yes, there’s a countdown clock!) it’s only 2 months, 19 days, 6 hours and 39 minutes until Amazing America debuts! Starring Sarah Palin, you guys!

What will Sarah be doing (besides amazing America)? I’m glad you asked. She’ll be exploring and experiencing…

… the coolest and most original people, places, businesses, and gadgets that appeal to Red, Wild and Blue America.

Gadgets! There’s going to be gadgets! And original people! Actual original people (Sarah doesn’t like those icky cloned people, and who does because clones totally suck). The show is going to be on The Sporstman Channel, which you may not have ever in your entire life heard of, but which features such engaging quality programming as Addictive Fishing with Captain Blair Wiggins, MeatEater (the new season), Skull Bound, and Pigman: The Series. 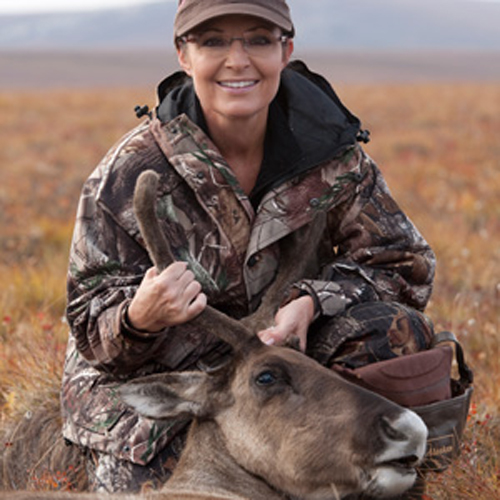 If you do not watch her new show, Sarah Palin will Godfather your ass with an elk’s head.

According to the show’s producer, Governor Palin (that’s right — people don’t believe it, but Sarah was an actual real I’m-not-making-this-up no-shit real governor for half a term of the most socialist state in the Union) deserved a larger stage than “just hunting and fishing.”

“We wanted to have a little more fun than that. So we’re doing bull riding. We’ve got the NRA Museum. We have some fire rescue workers. It just runs the gamut of cool things in America.”

The gamut, you guys! Because what could be more fun and more cool than the NRA Museum and riding bulls while rescuing people from fires? Nothing! The audience will also be educated about Sarah’s philosophy and world view, in which she offers insights like this:

“I think this world would be better off having more young women holding a fish in a picture than holding their camera in front of a bathroom mirror, taking a selfie.”

So true! We’ve all noticed how rare it is these days for women to hold fish. It’s been years since I’ve seen a woman holding a fish. Why don’t women hold fish anymore? That’s what’s wrong with America (plus we have a negro president — and isn’t it curious that there are NO PHOTOS OF HIM HOLDING A FISH!!!). 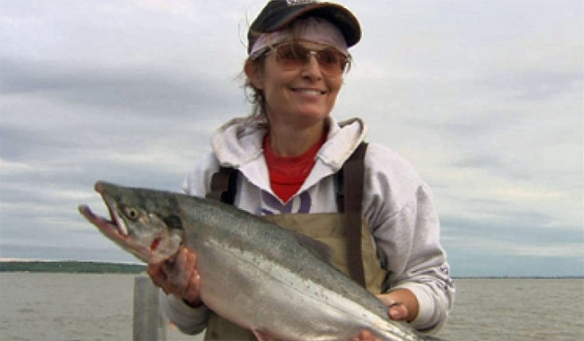 So set your alarm clocks, America. Thursday April 3rd at 8 o’clock in the evening on the Sportsman Channel. Watch it, or the terrorists will abort a white Christian baby. During a gay pride parade.

12 thoughts on “where all the white fish-holding womens?”