Rush Limbaugh is a coward. He hides behind the title ‘entertainer,’ which he believes gives him cover for making the most reprehensible and offensive remarks. That title also gives timid Republican politicians cover; they can dismiss the things Limbaugh says as outrageous while claiming it’s just entertainment.

It’s a convenient lie that nobody believes—including the people who speak it. 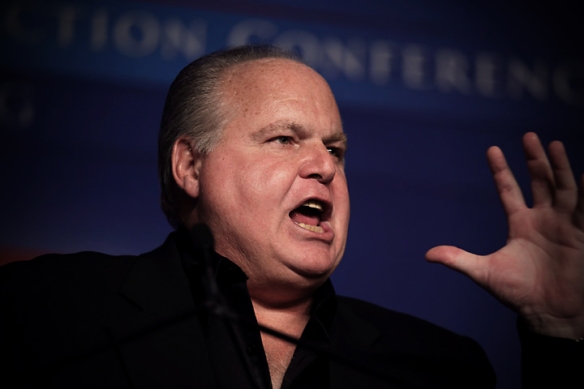 Rush Limbaugh is a coward, and like so many cowards he’s a bully when given the opportunity. He sits in a small sound studio, protected from the outside world, insulated from reality, and from that safe vantage point he mocks and jeers at people who disagree with him. He surrounds himself with sycophants and toadies, people who adore him because he’s found a safe way to say the ugly things they think.

Rush Limbaugh is a coward and a bully, a contemptible and despicable person. But behind all the bluster and bloviating, Limbaugh is also a pathetic and fearful little man, deeply inadequate—and he must be painfully aware of that. He must be terrified that others may recognize his fear and inadequacy. It would be horrible, I think, to be so afraid of so many things.

This isn’t to suggest Limbaugh is deserving of our empathy or compassion. He’s not. But one difference between us and Rush Limbaugh (one of the many differences) is we don’t reserve our compassion and consideration just for those we think are deserving. That would be a cheap sort of compassion.

Rush Limbaugh is a coward and a bully, and as much as I despise the man and the many horrible things he says, I can’t help feeling a grudging sort of sadness for him. In the words of the poet Mr. T., I pity the fool*. But I can’t pity him very much.

* To be more accurate, the phrase “I pity the fool” originally came from James Merle, an Autobiograph, which is a novel written in 1864 by William Black. He wrote: I pity the fool who marries and yet imagines he may be a great man. That seems to apply to Rush Limbaugh, who has married four times and so must want to believe he’s four times a great man. In fact, he’s merely four times a fool.