A hundred photographs. A nice round number, and a good stopping point for the Knuckles Google Street View project. I thought about maybe stretching it out until February 18th, which would end the gig a full year from the start date, but…naw. A project shouldn’t be ‘stretched out’ just to reach an anniversary. A project ends when it feels done.

This project feels done to me. Like every Knuckles project, it began primarily as a way to amuse myself. And I mean ‘amuse’ in the older sense of the term: to cause a person to muse about something. To think about stuff. A project, for me, is just a device to engage my interest and attention. A project allows me to become absorbed, to feed my curiosity, to make me think. Granted, the thinking might seem frivolous — at least on the surface — but it’s thinking. Thinking is fun. 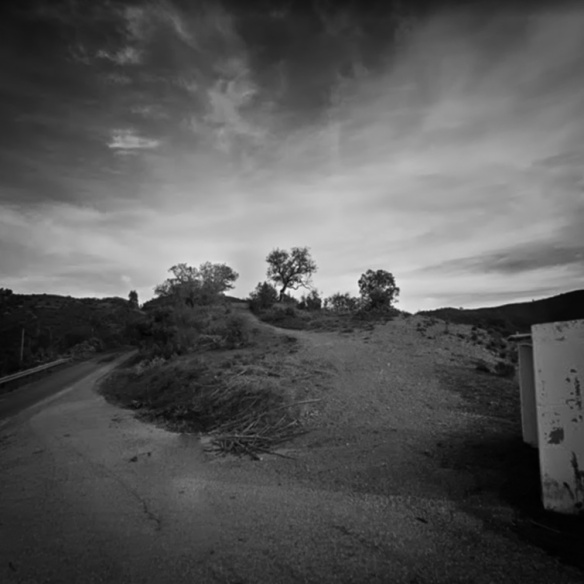 The GSV project made me think about a lot of stuff. The practice of curation, for example. I mean, the entire project is, itself, an exercise in curation. We’re talking about ten million virtual miles of highways, streets, avenues, dirt roads, and donkey pathways in eighty-three countries, all dispassionately captured by robotic cameras, each of which has six to eight lenses. That’s a lot of images. I only saw the tiniest fraction of that universe of images, and culling a hundred images out of that number meant some heavy-duty thinking about what makes an image interesting.

It was exceedingly frustrating to have NO control over the elements of composition. I came across a LOT of scenes that would have made a compelling image, except for some distracting element — a trash can, a parked car, a fence, a sign that interfered with the image. Stuff that would be easily dealt with in person. I knew that frustration would be baked into the project, of course. But it was still maddening.

In fact, ‘America’ was everywhere. If you followed the project, you may have noticed the majority of the images are located either in the countryside or in small villages. That’s because so many cities — or large areas of the cities — were indistinguishable from each other. Aside from the signs, a city block in Uruguay looked very similar to on in Romania or Indiana. And they were all dull. The oldest neighborhoods of the oldest cities, on the other hand, were often very distinct. Unfortunately, the streets in those neighborhoods were almost always so narrow, so cluttered, so visually busy that despite how interesting they were, they simply weren’t amenable to a good image.

The project made me think about architecture. Not just the obvious architecture of buildings and homes, but also the architecture of infrastructure. Bridges, power lines, bus stops, sheds, fences. Rural mailboxes in Scandinavia look different from those in rural mailboxes in Canada, which look different from those in rural Indonesia. Telephone poles in former Soviet republics and telephone poles in Mississippi are distinct from each other. It was sometimes easy to tell what part of the world you were in simply by looking at the local infrastructure.

Local infrastructure reflects local attitudes. I mean, consider tunnels. You need to build a road through a hilly or mountainous landscape, what do you do? Some nations will build tunnels; other nations will just level the landscape. That approach tells you something about cultural attitudes.

I was also surprised by how many animals I saw on Google Street View, though I don’t know why that surprised me. We live in a world of animals, don’t we. Pets, livestock, wildlife. Dogs, goats, birds, horses, cats, cattle, sheep, chickens. And, of course, people interacting with those animals. Walking dogs, herding cattle, feeding goats and chickens, playing with cats. These were often the most frustrating images, because there’s something strangely emotional about the way humans interact with animals. But this is another of the problems of relying on a robotic camera; robots have no interest in decisive moments. Nor do animals. Animals move. People will stop and stare at a Google Street View car, but to a dog or a donkey, it’s just another car. So the vast majority of images of animals interacting with people (or other animals) were blurry and useless. Except for those of sheep and cattle. Those guys just stand there.

This has been a fun project. It’s been frustrating, of course, but it’s been interesting. And now it feels finished. It didn’t work out quite the way I’d expected (or hoped), but it did work out in ways I hadn’t anticipated. I hadn’t expected weather to be so important. I hadn’t expected cloud formations to be such a factor. I hadn’t expected telephone poles or trees to play such a prominent role. I expected people to be a more critical element.

I like the fact the project didn’t take the shape I thought it would. I like its final shape. I’m satisfied and pleased. And ready to be done with it.

With the final photo today, Knuckles Dobrovic is going back on the shelf. Not forever, obviously, but for a while. One of the things I’ve learned from the Knuckles projects is how much I like the structure that’s necessary for a project. I like the restrictions and the constraints that impose a certain discipline on me. I enjoy pushing against those restrictions and constraints. But this road ends here.

At some point, I’ll take Knuckles back off the shelf. At some point in the future I’ll cobble together some semi-lazy rationale for a project to distract me from all the other stuff I ought to be doing. Until then, if you’re interested in seeing all the photos — or any of the various Knuckles projects — you can find them here on Instagram.

EDITORIAL NOTE: It’s been pointed out to me that I neglected to include links to the origin of the project and the halfway point. I’m a putz. Fixed it, though.

10 thoughts on “knuckles, returned to the shelf”