This is the actual transcript of Comrade Trump presenting Conan the dog to members of the news media. For the sake of brevity and my own sanity, I’ve edited out most of Vice-Comrade Pence’s lickspittle remarks. Okay, here we go.

“Good morning. So this is Conan — right now, probably the world’s most famous dog. I don’t think — I have to use the word ‘probably.’ And Conan is an incredible — it’s an incredible story. I learned a lot about this particular type of dog. And it’s trained that, if you open your mouths, you will be attacked. You want to be very, very careful. But Conan came over from the Middle East — just arrived — with some of the great people from the Special Forces that did the incredible fl- — it was a flawless attack. And al-Baghdadi is gone. But that was a flawless attack. And I just met quite a few of them. And we just gave Conan a medal and a plaque. And it’s really — and I actually think Conan knew exactly what was going on. But a dog that is very, very special and we could maybe say — Mike, come on over. Maybe you want to say something about the type of dog and — They were going to put a muzzle on the dog and I thought that was a good idea, but then it gets even more violent, John. So I had a choice. But, no, the dog is incredible. Actually incredible. We spent some good time with it. And so brilliant, so smart — the way it was with the Special Forces people that it worked with. And for obvious reasons, they can’t be out in front of the media. But they did a fantastic job. Conan did a fantastic job. And we’re very honored to have Conan here and to have given Conan a certificate and an award that we’re going to put up in the White House.

Mike, would you have something to say? 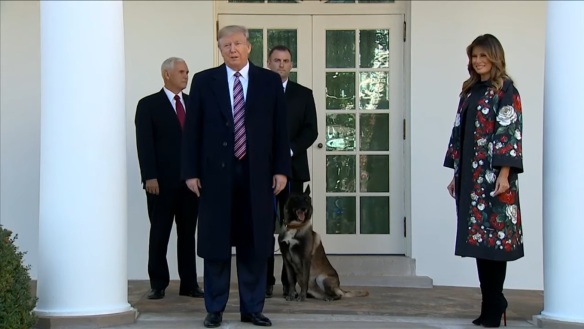 Vice-Comrade Pence spent the next couple of minutes licking Comrade Trump’s butt. He reminded Trump that it was his decision to launch the mission that “took down the leader of ISIS” and that “having this extraordinary dog here today is all a reflection of our armed forces” and also that “it’s a real joy to be able to help welcome him here to the White House with you.” He gave the president a look that might have been an approximation of an expression he thought of as ‘joy’. Then it was back to Trump.

“It’s true. And Conan was very badly hurt, as you know. And they thought maybe was not going to recover. Recovered, actually very quickly and has since gone on very important raids. As you know, we captured 100 percent of the ISIS caliphate. When I took office, we had almost nothing. It was as though they were just forming again, and now it’s 100 percent. And we have done a lot of work since then. We have done a lot of work since the raid. Certain things have happened that are very important. So we’re in very good shape. We’re in very good shape. We’ve had a lot of help, too, from other countries. We’ve had a — we’ve really done a job. I just want to thank you all. So, this is a special time for Conan. And we really appreciate it. And I was told about the breed. I was told about Conan himself. And Conan is a tough cookie. And nobody is going to mess with Conan. I asked one question. I said, ‘So, what chance, with Conan…’ I got to see how fast Conan can move. I said, ‘What chance would a strong man have — really strong, tough, a fighter — what chance would this person have against Conan, without the guns? What chance? And I guess the answer, pretty much, was ‘none.’ He would have no chance. So, it’s amazing. And yet, you see how beautiful and how calm, during a situation like this, is. And you’re very lucky he doesn’t — he’s not in a bad mood today, Jeff. [Laughter] Not in a bad mood. You’re safe. Anyway. So I want to thank you all. Thank you very much. And this is a great honor to have Conan here. A great honor to have the Special Forces here. They’re in the Oval Office.”

Two members of the press asked Trump 1) are you going to adopt the dog, and 2) is the dog retiring. Seriously, those were the questions.

“I love this dog. No, Conan is not retiring yet. Conan is primetime, age-wise. Primetime. I asked that question. They go for about six years — like an athlete. Six years. They start — they like to get them at one and a half or two years old, and they’ll go for about six years from that time. After that, it happens where maybe the reflexes aren’t quite as good. You know, things like that happen. It would never happen to us. But the dog, primetime, is those six years after two. And they’re very special dogs. They’re very hard to get. This particular dog is — this is the ultimate fighter, ultimate everything. Ultimate in terms of sniffing drugs. We have a — we’ve spent a tremendous amount of money on drug equipment at the border. And I was talking to the people, and I say, ‘Well, is there anything better than this equipment?’ ‘No, sir. The only thing better is a dog.’ A dog — this type of dog, exactly, because it’s a certain type of dog. And it’s pretty amazing. But they are really better. We had a case where we had drugs in a — the cylinder of a car. And it was undetectable by this very expensive machinery, which is really amazing machinery. But still, it was undetectable. The dog came in — wah, jumped on the hood, pointing — you know. Opened the hood and knew exactly. It’s incredible, the sense of smell or whatever it may be — probably sense of smell. So they’re incredible animals. And thank you all very much.”

The entire episode was cringe-worthy. Trump never touched the dog. Melania looked slightly scared. Pence managed to resist the urge to hump Trump’s leg. Even the dog seemed to understand there was nothing normal about this — which maybe proved Comrade Trump said at least one thing that wasn’t a lie: Conan knew exactly what was going on.

5 thoughts on “comrade trump has thoughts about a dog”