Somebody asked me why I’ve never written anything about the cat on this blog. By ‘the cat’ I mean, of course, the cat that shares this living space. My reply was something to this effect: “Dude, I have written about the cat. Probably.”

And hey, it turns out I wasn’t even lying. Not entirely. I actually did write a thing about my morning routine with the cat. But aside from that, the cat doesn’t feature heavily in this blog (though the wee creature appears with alarming regularity on Instagram and Facebook). I mean, she’s been mentioned–and mentioned prominently, I might add, not just a casual passing reference–a couple of times. Once in a thing about Buddhism and shoveling snow and once in reference to the Cassini-Huygens satellite. That’s not bad, really, considering the cat is just a cat.

But the fact is I haven’t really written about the cat as the other species with whom I share a living space. So. The cat. She has a name: Abby. I didn’t give her the name and I don’t use it, but it’s traditional for house cats to have names and veterinarians insist on having a name for their records, so there it is. Abby. I generally just call her “the cat”. Or “little cat”. Or, when she’s eating, “you wee swine”.

Why don’t I use her name? I really don’t know. When people ask (and why do people ask? it seems weird, but they do) I tell them it seems presumptuous to put a human name on any non-human, and especially on a cat. But I’ve shared space with other non-humans and other cats, all of whom had human names. So why not this cat? Again, I don’t know. It’s not any sort of distancing technique; the cat and are pretty much bonded. It doesn’t make any sense, but there it is. 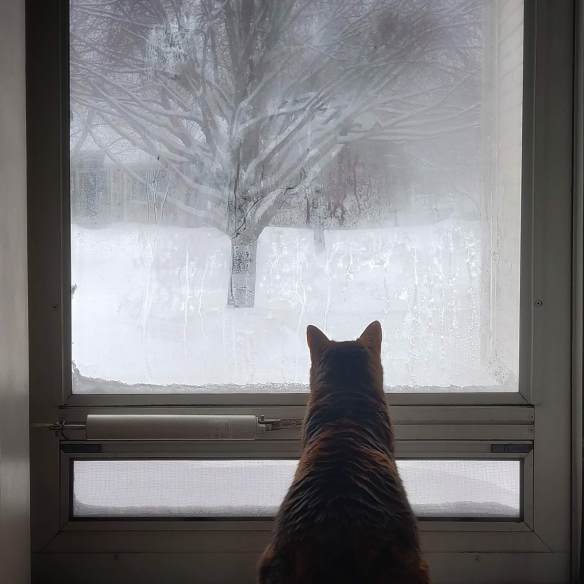 I photograph her occasionally. Okay, that’s a lie. I photograph her a lot. I delete most of the photos immediately because it’s not like the world needs more photos of cats. But at the same time, cats are just so fucking photographable. What’re you gonna do? Not photograph them?

In the end, I guess I don’t write about the cat because she’s a cat. Just a cat. She eats, she sleeps, she shits in the litter box (almost always), she chews grass and vomits (on rare occasions), she sits on my lap (she’s insistent about that; she’ll come sit in front of me and just stare at me until I invite her up — or until she decides the invitation exists even if I don’t offer it, and even if there’s a plate in my lap), she makes an odd grunting sound instead of purring, she sometimes likes to attack my feet from hiding when I walk through the house, she mostly stays in the house (which is good on a number of levels, including the fact that she absolutely sucks at hunting and so would starve to death in a week if she were on her own), she sheds very little until she’s sitting on my lap, if she’s not on my lap or on her perch she’s somehow managed to disappear into another dimension (because she’s nowhere to be found), she knows I go back to work around 8:30-9:00 at night and will return from her inter-dimensional travels around that time and insist on being petted and fed. I have absolutely no idea how she tells time, but she does. Go figure cats.

She has NO interest in boxes. None. Or paper bags. What kind of cat dismisses boxes? It’s unnatural, right?

But that’s just it. The cat is your basic cat. Weird, distant, clinging, imperturbable, occasionally boneless, contradictory, curious, predictable, unpredictable. I can’t say I understand her. But she makes me happy. I’d like to think I make her happy, but I recognize that I may just be the one who feeds her.

Who the hell knows what a cat is thinking?