Snow probably makes me a better Buddhist. I’m not sure I’m happy about that.

I mean, there’s the expected Buddha stuff you’d associate with snow. The stillness. The tranquility. The beauty of falling snow, of drifting snow, of snow whirling in the wind, of the purity of snow. Snowfall can be very contemplative.

But eventually there comes the dull, monotonous, tedious, sometimes painful reality of dealing with the snow. Snow has to be moved. It has to be cleared from driveways and sidewalks. That means shoveling. Or — and this is SO much worse — if the snow is too deep to shovel, cranking up the snowblower. A noisy, smelly, hateful, but fairly effective machine. It’s faster and probably more efficient, but I fucking hate the snowblower.

However, I don’t hate shoveling. Okay, that’s a lie. I do hate it. I hate it and I appreciate it. You know that hauling water/chopping wood thing that Buddhists like to talk about? Before enlightenment, chop wood, carry water. After enlightenment, chop wood, carry water. You hear that all the time when you’re first noodling around with Buddhism. What does it mean? It means whether you’re enlightened or not, shit has to get done. A big chunk of Buddhism is about how you approach getting shit done.

Hardly anybody I know has to do much hauling and chopping, but I know a lot of folks who have to deal with snow. Shoveling snow is physical labor. I am not a fan of physical labor. If there was any point at all to having spent four years in military harness, it was to get Uncle Sugar to pay my way through college so I could get a job that didn’t involve sweating, lifting heavy things, or anything approaching actual labor. Shoveling snow is as close as I get to manual labor, for which I am ever so grateful.

This is where the Buddha stuff comes in. One of the things Buddhism teaches you (or tries to) is that if you do a thing, you do that thing. That’s it. You do that thing and you do it well. You do it mindfully. You don’t cut corners, you don’t do it half-assed, you don’t rush, you don’t complain. You don’t think about what you’re going to have for lunch, or fret about whatever fresh hell Comrade Trump has inflicted on the world, or debate the relative merits of Crazyhead compared to Buffy the Vampire Slayer. You just do the damned thing.

It was still dark out this morning when I began to shovel snow. Dark and cold. I’m talking 16F with 16 mph winds. Miserable weather. But except for the wind, it was quiet. And I shoveled. The driveway. The front walk. The sidewalk. Much of both neighbors’ sidewalks.

As always, when I began shoveling I hated it. But there’s a weird sort of peace that comes from the rhythm of it. It’s pretty easy to slide into a state in which you’re mindful of what you’re doing without being altogether aware of it. If that makes any sense. Shoveling snow becomes a sort of meditation. Except that when you’re done, you’re exhausted, and your knees and back and shoulders hurt like hell, and you’d murder for a cup of hot coffee.

I shoveled for about an hour. The sun was coming up when I finished. Neighbors were beginning to shovel their own drives and sidewalks. Some asshole up the road tried to start his snowblower, but it just roared and coughed a few times, then failed. That pleased me — which is evidence that I’m not a terribly good Buddhist. 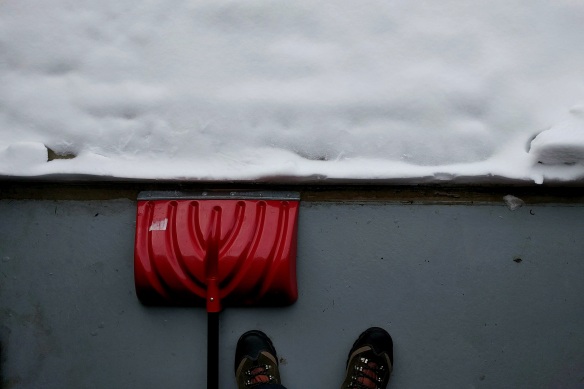 I put the shovel away, came inside, started the coffee. Fed the cat. Took some Advil. By the time I’d changed clothes, got my coffee, and parked my ass in front of the computer, the cat had finished eating. She decided it was critically important that she sit on my lap. I explained to the cat that my knees were on fire, so I’d prefer not to have a cat on my lap, thank you very much.

So here’s me, typing slowly because it’s awkward to use a keyboard with a cat on your lap. My knees ache, but the coffee is good and the cat is making the odd grunting noise she makes instead purring like a normal cat.

I am strangely contented.

1 thought on “snow, the cat, and some buddha stuff”