It’s pre-morel mushroom season in my part of the world. Pre-morel season is that brief period before the brief period of actual morel season; it’s that interval when common sense, experience, and science all agree that it’s still too damned early for morels to appear, but you go hunting for them all the same because hey, you never know and why the hell not. Actual morel season probably won’t start until — who knows? Later this week? Ten days? It’s a damned mystery.

But let’s face it, for a lot of us, there’s no meaningful difference between pre-morel season and morel season. We find the same amount of mushrooms in both. In other words, none at all. 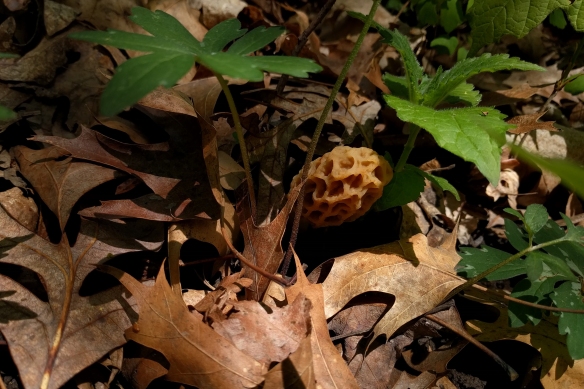 If you spot one morel, there are usually others nearby.

Subtle and indirect — that’s how you find morels in the woods. You walk slowly, scanning the ground for small disruptions in the pattern of the dead leaves. You walk for a couple of minutes, you stop and search for a couple of minutes. It doesn’t necessarily matter where you walk. There are dozens of tips suggesting the best conditions for finding morels — near dead/dying elm trees, old creek bottoms, south-facing slopes, areas of mottled sun, areas of bright occasional sun, shady areas — but the difference between spotting a morel and missing one is often just a matter of a few feet in one direction or another. So you sort of meander semi-aimlessly through the woods, guided by 1) the wisdom of your morel-hunting ancestors, 2) the terrain itself, 3) maybe a deer track, and 4) a sizable dose of bullshit folklore.

Hunting morels is weirdly meditative. That’s why folks who talk about hunting morels sometimes sound like students of Zen. Be aware without concentrating, be focused without any objective point of focus. Morels can be masters of camouflage; you can carefully study a few square feet of woodland for a couple of minutes, suddenly realize there are two or three morels right there in plain sight, look away to tell your friends, and then struggle to find those same morels five seconds later.

But here’s a true thing about hunting morels: you can find them just about anyplace. Abandoned lots in town, roadside ditches, suburban yards, in sand, in mud, along farm fields and pastures. Another true thing: a morel you gather from a rural roadside is just as tasty as a morel you gather from the deep woods. One more true thing: there’s always delight in finding a morel anywhere at all. 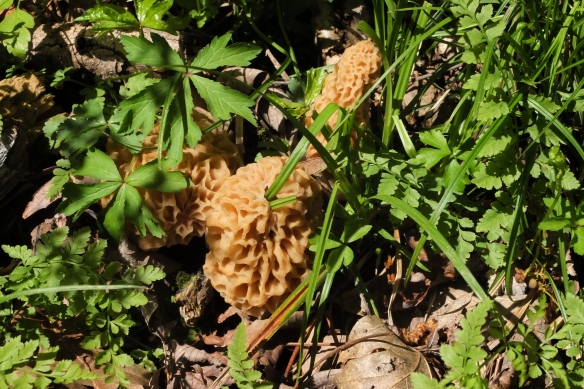 Actually on a south-facing slope

Still, most of us hunt them in the woods. The tick-infested, thorn-ridden, spiderwebbed, bramble-thick woods. That’s partly because the odds of finding a morel are somewhat better in the woods. Not a lot better, but better — just like the odds of winning the lottery are only slightly improved by buying a ticket. Still, I think most of us hunt them in the woods because getting deep into the woods is…well, it’s nice, isn’t it. It’s pleasant. It’s deeply relaxing. It’s…I’m going to say it…therapeutic.

I’ve seen lots of online references to ‘forest bathing’ lately. That’s a notion developed in Japan (where it’s called shinrin-yoku) back in the 1980s. Forest bathing sounds silly, but it’s become a rather trendy form of therapy. I recently read that it can increase a person’s “capacity to communicate with the land and its species.” I’ve no idea what that means, but it doesn’t sound any less absurd that some of the medical claims in support of forest bathing. For example, this:

[M]any trees give off organic compounds that support our “NK” (natural killer) cells that are part of our immune system’s way of fighting cancer.

Completely ridiculous, right? Well, actually, no. It turns out trees and plants actually do emit compounds called phytoncides. Surprisingly, this has nothing to do with the violent death of phytons. Phytoncides help prevent trees and plants from rotting or being eaten by some insects and animals. And hey, when you go into the woods, you breathe that shit in. And guess what? It turns out, it’s actually good for you.

This what pre-morel season looks like — nothing but you, some ticks, and an invisible cloud of phytoncides.

Seriously. A few years ago the New York Times acknowledged studies demonstrating that walking in the woods for a couple of hours can actually increase a person’s white corpuscles (those ‘NK’ cells mentioned earlier) for up to a week. There have been a number of highly respected medical researchers writing in highly respected medical journals all highly agreeing that despite its absurd name, forest bathing (and therefore morel hunting) is good for you.

This video is from a couple of years ago, during actual morel season. It may look like a lazy stroll down a deer track. But no! In fact, this is me madly forest bathing and soaking up phytoncides like a damned sponge.

I’m always a tad alarmed to discover that something I enjoy is good for me. I suspect I’ll now be accused of hunting morels for my health, which would take a great deal of the fun out of it. Well, it would — except that, as I said, finding morels is the other reason for hunting them. Sometimes the point of morel hunting is coming home with a sack (mesh, naturally, so the spores can be spread) full of morels. I don’t mind doing something healthy if it delivers the occasional mushroom.

So for the next few weeks — once pre-morel season morphs into morel season — I’ll be out there as often as I can, forest bathing like motherfucker. I don’t care if it’s good for me or not. I’ll be looking for shrooms; my white corpuscles can look out for themselves.

4 thoughts on “my ongoing relationship with phytoncide”