Occasionally people send me things. I’ve no idea why they do, but they do. Not often. Maybe three or four times a year. But periodically the postal carrier arrives at the door with an unexpected package.

Well, not always unexpected. I mean, usually somebody has emailed me and said something like “Dude, I have something for you — what’s your address?” And I give them my address. Why the hell not? I spent a chunk of my life as a professional invader of privacy, so I know the notion of personal privacy is pretty much an illusion. So far nobody has mailed me dog shit or anything explodey, so there’s that.

It always pleases me when these packages arrive. Sometimes, I confess, I’m a tad confused by what’s actually in the package — because sometimes the thing in the package is…well, let’s say some of the stuff is eccentric. But still, how could I not be pleased at the generosity and thoughtfulness behind the gift? 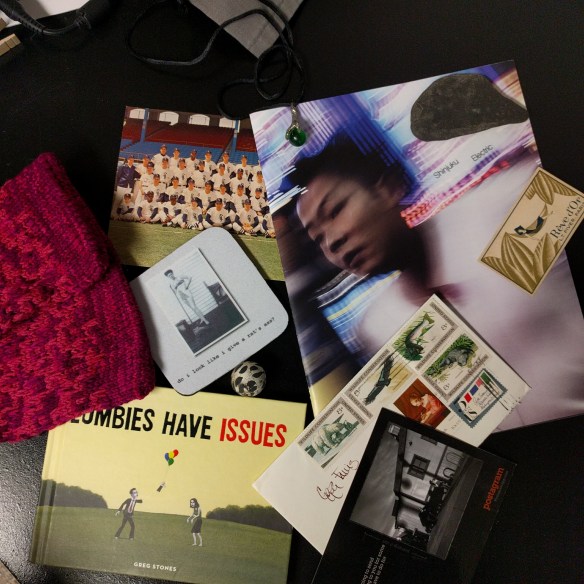 A random assortment of stuff folks have sent me.

I get photographs, of course. Lovely, interesting, beautifully printed photographs. And books (usually about photography, or about photographers, or by photographers but I’ve also received stuff like old Conan Doyle novels). I’ve a friend who, like some character out of fiction, sits in European cafes and writes beautifully (occasionally indecipherable) hand-written letters on the most sensuous paper, sometimes including an interesting business card. And occasionally there’s the eccentric stuff — shark teeth, a bent and rusty horseshoe, a bit of shale shaped like a duck’s head, an advert for gas masks, a box of Jane Austen band-aids, a ceramic ashtray. “Saw this,” people write, “thought of you.” I’m not sure quite what it means when somebody sees a key chain modeled after a Medical Examiner’s toe tag and thinks of me, but I like to think it’s somehow a compliment. 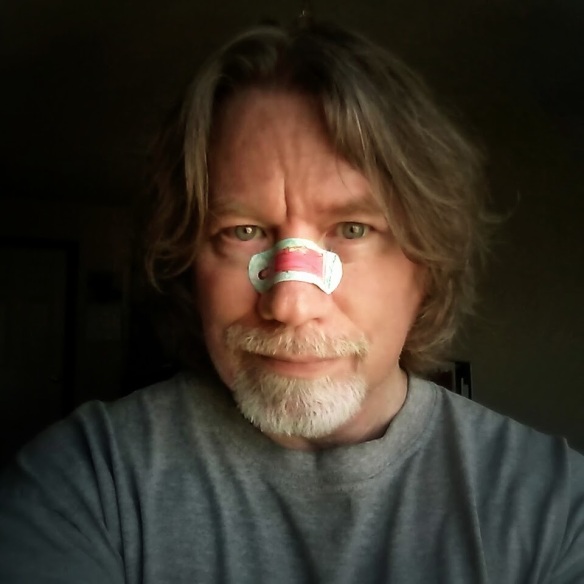 Yes, I took a selfie with a Jane Austen band-aid on my nose.

Okay, this is going to seem like a tangent, but it’s not. Back in 2012 I wrote a blog post about encountering a huge murder of crows. A couple of years ago, I was notified about a new comment on that post. It read:

Hi Greg,
I love your photos. I, too, am a huge fan of crows and ravens. We had a pet raven named Cyrano De Bergerac. He was so smart and so funny. I was wondering if I could use/buy one of your crow photos to include in a painting I want to do.
Thanks from heather

Dear Greg, I responded to an early blog post about crows. I had a pet raven named Cyrano De Bergerac and I asked if I could use your photos for a painting I wanted to do. I finally got around to working on it. I am almost finished and I was wondering if you would like to have it. If so, may I have your mailing address?  Thanks from Heather

So I gave her my address. And, again, promptly forgot all about it. Then the painting arrived.

I don’t know what I was expecting. Something small, I suppose. Maybe one of those 8×10 cotton duck canvas panels. Actually, I’m not sure I had any expectations at all. I was just pleased that Heather liked a photograph, and pleased that she wanted to use it as a basis for a painting, and enormously pleased that she was generous enough to want me to have the final work. But whatever I was expecting, I can say without any hesitation that it wasn’t this. It wasn’t 34×24 inches of this: 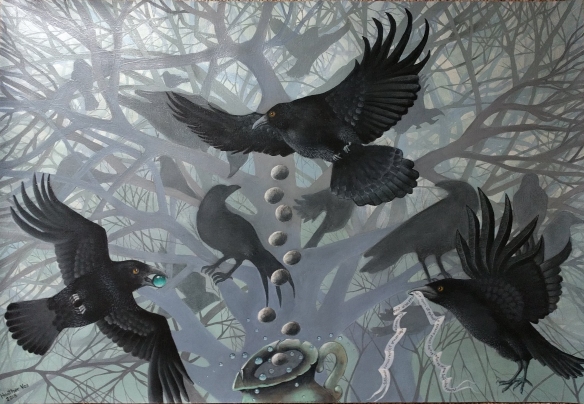 I was gobsmacked. My gob? Totally smacked. It’s crows, of course, but it’s not just crows; it’s Aesop’s crow, the one from the fable in which a thirsty crow drops pebbles into a jug of water until the water level rises so he can drink. It’s Aesop’s clever crow channeled through Heather Vos, with a bit of mysticism tossed in, and a healthy dollop of pure crowness.

There’s a 12th century bestiary that includes an imaginary discussion between a crow and God. God, it seemed, was foolish enough to try to ignore the crow. The crow wasn’t having any of that, even from a god. The crow said,

“I, Crow, a talker, greet thee Lord. with definite speech, and if you fail to see me it is because you refuse to believe I am a bird.”

What I love most about the painting, of course, is that it exists. That it’s a physical reminder that people like Heather Vos exist. That a woman from a small town in Ontario, was thoughtful enough, generous enough, talented enough to create this painting and share it with me.

I’m a lucky guy, I recognize that. I live in a safe place, I have a warm bed in which to sleep, I haven’t had to miss a meal in years, I have friends and family. I’m generally a ridiculously happy person. On those rare occasions when I start to feel the world is cold and cruel (and there’s ample reason to feel that way these days) all I have to do is look around my desk and I’m reminded that the world is full of people who are kind and caring and altruistic and warm-hearted — and I’d go on, but I already sound too much like a Pollyanna.

But thanks — thanks to Heather and to everybody who has ever sent me anything, including their thoughts.