We are a nation ruled by fuckwits and cowards. There are people in this nation who truly believe a continuing cascade of mass shootings is a reasonable price to pay for the freedom to…to what? To own a lot of guns? And there are politicians who know there are practical ways to reduce that body count, but are too afraid of losing their job to actually do anything about it. Fuckwits and cowards. 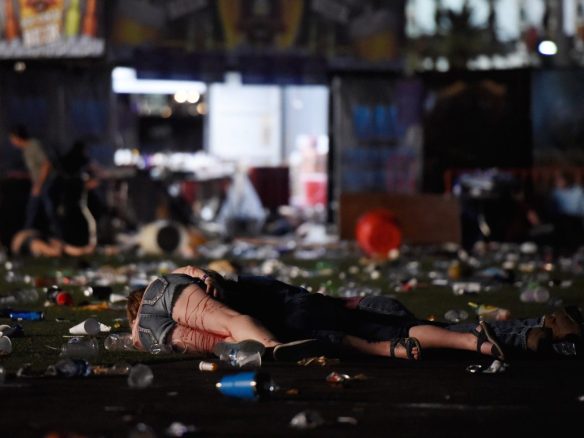 Here’s a sad thing: I can no longer sustain any outrage about the butcher’s bill. 20 second-graders dead, 32 college students dead, 50 gay folks dead, maybe more than 60 country music fans dead. They’re becoming meaningless numbers. Meaningless deaths. Because we all know we’re not going to do anything about it beyond muttering something about thoughts and prayers. They’re good at that, the fuckwits and cowards; they have a never-ending font of thoughts and prayers.

It’s not just the mass shootings, of course. Every day about a hundred people die by the gun. They’re not all murders; some of them are suicides, some of them are accidental, some of them are a result of negligence. The fuckwits believe those deaths are inevitable, which means the world is a dangerous place, which means they’re afraid all the time, and because they’re fuckwits they believe the only way to protect themselves from people with guns is to have guns themselves. The cowards know better, but they encourage that circular thinking because it helps them stay in power.

But damn it, we still have to do it. Call your members of Congress today. It won’t matter, but do it anyway. Why? Because there are a bunch of dead country music fans to go along with our dead gay folks and our dead college students and our dead second-graders and all the dead spouses and girlfriends and co-workers and children and neighbors and siblings and no matter how fucking tired we are, we can’t just stay quiet.

If we stay quiet, then we’re also fuckwits and cowards.

11 thoughts on “fuckwits and cowards”