I have a fair amount of work to do today, so as usual I’ve been procrastinating. Read some reviews of electric bikes, checked out Comrade Trump’s latest rants, did some research on Chromebooks, skimmed a half-dozen or so political blogs, realized it had been maybe two or three years since I’d read Dinosaur Comics, rectified the hell out of that situation (and learned that lightning will mess up toast ), watched two short videos about octopuses and sinkholes (clarification: one video about octopuses and one video about sinkholes, though now I kind of wish there’d been two videos about octopuses IN sinkholes, because that would be epic), and processed a few photos I’d shot at the local Farmer’s Market. 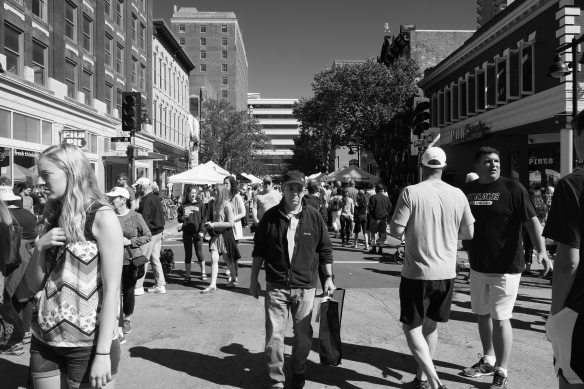 We have a big Farmer’s Market. Nine city blocks. Forty thousand people showed up on the opening day. We have a free shuttle that runs through the city to ferry folks to and from the market. There’s also a bike valet service if you choose to cycle to the market. This year there are almost 300 vendors. There’s the standard fresh produce, of course, and the farm fresh eggs, and locally raised chickens and goats and all. And there are the usual homemade jams and jellies and salsas and artisan breads and pastries and local cheeses and infused olive oils and fudges. 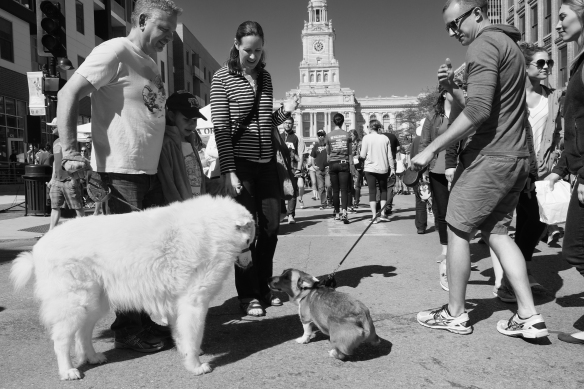 “Market Management encourages pet owners to leave their dog at home as the environment is not conducive to dogs.” Sure.

But we’ve also got folks who specialize in caramels and caramel products. You like lavender? We’ve a vendor that does nothing but lavender stuff. We have folks who make various types of nut butters. We have a couple of mushroom vendors. There are some women who sell an astonishing variety of dog biscuits and treats. You need a hand-crafted leather duffel bag or maybe a saddle blanket? We’ve a guy who makes them. There’s a vendor who deals in chocolate freeze-dried aronia berries and freeze-dried aronia powder. I don’t know what that is, but he’s there selling it. We have mustard specialists, and a booth that sells a half-dozen different types of Gouda. Lots of places that sell soaps and lotions. We have picklesmiths (which probably isn’t really what they’re called, but I like the term) and a vendor who sells dips and spreads made with goat cheese. 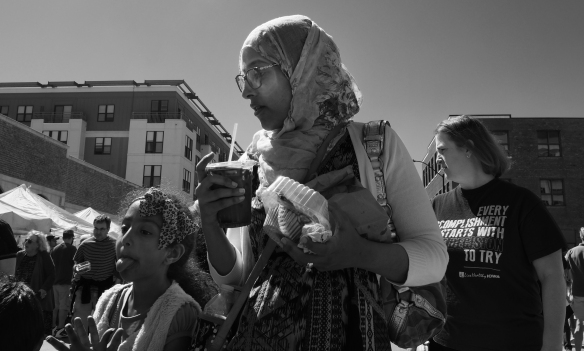 And lawdy, the prepared food. There’s a booth that sells Andalusian street food — a sort of Arabic/Spanish fusion. There’s a ridiculously popular vendor who does nothing but various grilled cheese sandwiches. Hand-crafted root beer and ginger beer. We’ve got folks who serve Hmong cuisine (during and after the war in Vietnam, Iowa took in lots of Southeast Asian refugees — it was, oddly enough, a kinder times). You can buy borscht and perogie and cabbage rolls, you can get falafel and babaganouj, you can get sarma and ćevapi, you can get Salvadoran pupusas and Laotian sien savanh, You can eat yourself into a damned coma.

Everybody puts their trash in the trash cans. Hey, it’s Iowa — we’re nice.

Forty thousand people, mostly getting along. Mostly. I mean, there are some serious live musical conflicts. They tend to space out the different musicians in an effort to reduce that, but inevitably you’ll find yourself halfway between the women singing feminist folk songs and the blues band, and that sparks some dissonance. Or the guys playing the Peruvian flutes (I’m okay with about five minutes of Peruvian flute music, then I begin to hope Comrade Trump decides to invade Peru) will occasionally disrupt the old guy in the seed corn ball cap playing the fiddle. But none of them seem able to drown out the street preacher who insists on telling you loudly that Jeebus loves you while hinting that you’re probably not remotely worthy of it. But somehow that seems to fit right in with the Market ambience.

I love the Farmer’s Market, as much for the sense of theater as for the food and produce. I love the energy and the confusion and the way everybody totally disregards the official plea for folks NOT to bring their dogs. All manner of dogs — from Newfoundlands large enough to pull a tractor out of a ditch to dogs so tiny they hardly qualify as squirrels. It’s a constant source of astonishment to me that the dogs almost never seem to fight. They sniff, they occasionally bark, they bang into each other, and now and then you’ll see one piss on somebody’s shoe — but by and large the dogs just add to the delightful chaos. 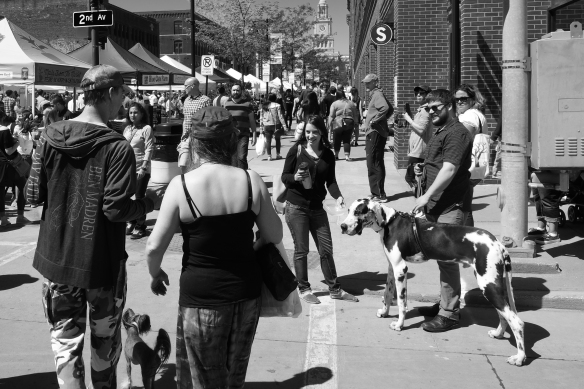 This will continue every Saturday until the end of October. That means no matter what madness has overtaken the world at large, there’s always going to be a more appealing madness to be found at the Farmer’s Market. 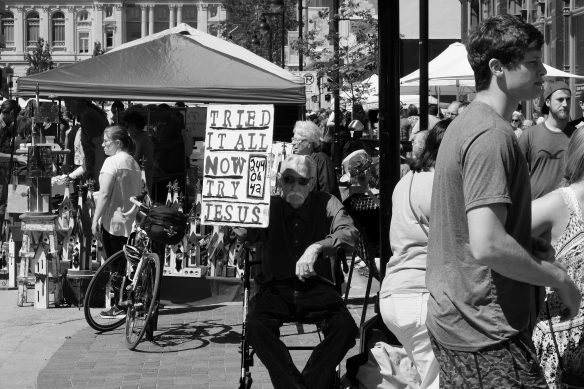 5 thoughts on “and the farmer’s market has begun”