I’m sorta kinda grateful for General Michael T. Flynn, Comrade Trump’s current National Security Advisor. I mean, yeah, the guy is unfit for the position — but so is just about everybody in Trump’s Cabinet of Nazgûl. But Flynn is doing something that really, truly needs to be done.

He’s resurrecting the Russians Helped Elect Trump story. Which is basically the Trump is an Illegitimate President story. And that’s a story that desperately needs more attention.

How is Flynn doing this? He’s using the traditional all-purpose Comrade Trump approach: incompetence bolstered by lying. There was a time when Gen. Flynn was a big hat in the intelligence community. He spent his entire Army career in intelligence, he’s held dozens of high-ranking intelligence positions, ending up as the Director of the Defense Intelligence Agency. Those are some serious intelligence chops.

Then he got himself fired for being an aggressive conspiracy crank. Well, not actually fired. He was encouraged to retire. His own aides coined the term ‘Flynn Facts’ to describe the crazy shit Flynn believed and would talk about. Also, nobody liked working with him, not just because of the crazy shit but because he was also apparently an annoying dick. Plus they thought Flynn was a tad sloppy with keeping government secrets actually secret. So they invited him to pack his bags and see what it was like to be a civilian again.

So Flynn bought a ticket on the Trump train. It didn’t hurt that Flynn, like Comrade Trump, had a crush on our boy Vlad Putin. That brought Flynn an invitation to visit Moscow and sit at the same table with Putie during an anniversary celebration of RT (which is basically the Russian government’s pet news agency). Shortly thereafter, Flynn began to appear regularly on RT as an analyst.

So here’s a guy who’s spent his entire career dealing with military secrets, who’d become a conspiracy nut, who was known to be lax with secret, now working for a Russian news agency at the same time he’s working for Trump’s presidential campaign at the same time Russia is interfering with the US election process in order to help Trump get elected.

That’s bad. But it gets worse. After it became public knowledge that the Russians helped elect Trump, President Obama booted a whole bunch of Russians out of the country. Every single time there’s been an international dispute resulting in Russian embassy staff getting the boot, Russia has retaliated in kind. Yet in this case, Putie decided to do exactly nothing. Étonnant! Incroyable!

It was so astonishing and incredible that the U.S. intelligence community got curious, and began doing all that shadowy techno-shit that spy agencies enjoy so much. And hey, they discovered that after the expulsion of Russian diplomats, Gen. Flynn had made contact with Sergey Kislyak, the Russian ambassador to the U.S.

So these folks asked Flynn the obvious question: “Dude, did you and Sergey chat about those sanctions?” To which Flynn replied, “What? Me? No, c’mon.” The intelligence community said, “No, seriously dude — did y’all talk sanctions?” And Flynn was all “What did I just say?” And then big hats in the Republican party also found it necessary to ask those questions. “Dude, we need to know if you chatted about this stuff with the Russkis,” to which Flynn replied “No fucking way would I do that.” The GOP big hats (including Vice President Pence and Reince Preibus) felt the need to ask one more time. “Seriously? You didn’t discuss this at all? We’re asking on account of we have to go on all the Sunday talk shows and we don’t want to be seen as lying.” Flynn reassured them. “Would I lie to you?”

Gen. Michael Flynn, it turns out, would totally lie to them. Of course, he would. And he did. This is the Trump administration, after all. These weasels would lie about how many slices of pepperoni are on the pizza. Both the NY Times and the Washington Post report that multiple sources — multiple sources, you guys — that Flynn is lying his three-star ass off. He did, in fact, discuss the U.S. sanctions.

Not just that, but he apparently told the ambassador that once Comrade Trump was in office, the sanctions would disappear. Think about that. Russia helps Trump get elected by fucking with the election process, the president punishes Russia for fucking with the election process, Comrade Trump’s advisor — the guy is going to become the National Security Advisor — tells Russia the punishment will be lifted. How fucked up is that? 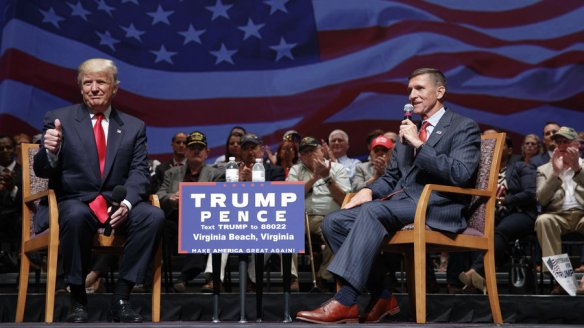 All this comes at the same time we’re learning more information about that Trump ‘dossier’ put together by a former MI6 operative. You know — the dossier with the story of the big bladder Russian hookers. That one. We’re hearing the U.S. intelligence community is pretty much confirming ‘parts’ of that dossier. Not the pissing business, don’t get your hopes up. No, they’re confirming the bits that suggest the Trump campaign colluded with Russian intelligence services to damage Hillary Clinton’s campaign.

Got it? After a lifetime of handling U.S. spy stuff, Flynn is pushed into early retirement. He becomes Trump’s baggage handler. He gets a gig with the Russian government’s pet news agency. Russia begins colluding with the Trump campaign to kick Clinton to the curb. Trump gets elected. President Obama punishes Russia. Flynn talks to the Russian ambassador and agrees to remove the punishment after Trump is inaugurated. Flynn lies about doing that. It really leads to one inescapable conclusion.

This motherfucker must go.

Oh, and there’s this: as of right now, Comrade Trump hasn’t addressed the issue of Flynn’s lies. When he does, I suspect Trump will lie about it.

Update: Gen. Flynn has resigned. In his resignation letter he states he “inadvertently” briefed VP Pence with “incomplete information”.

There are still a couple of issues that need to be considered and addressed. First, will Flynn be prosecuted under the Logan Act, which makes it illegal for a citizen to engage in “any correspondence or intercourse with any foreign government or any officer or agent thereof, with intent to influence the measures or conduct of any foreign government or of any officer or agent thereof, in relation to any disputes or controversies with the United States, or to defeat the measures of the United States.”

Second, what did Comrade Trump know about this, and when did he know it?

1 thought on “this motherfucker must go”