There’s a lot of wild speculation about what will happen when Donald J and his Cabinet of Nazgûl take office in January. Which is completely understandable, given that Donald J is following the Bizarro World approach to cabinet appointments. If he can’t find somebody who is actually opposed to the very existence of the agency he or she would be running, Donald J can at least find somebody who is completely unqualified to run it.

Pundits look at the venal greedheads and amateurish bunglers hired by Donald J to help run his government and say how unprecedented it is. But you know what? It’s not unprecedented at all. We’ve actually seen what happens to a government when it’s run by people chosen primarily for their loyalty to the president or to a political ideology rather than for their qualifications.

We saw it in Iraq.

After the fall of the Saddam Hussein regime, the Bush administration needed to create a replacement government. It was a unique opportunity — a chance to build a government from the ground up. The Bush folks created a new entity to handle the reconstruction of Iraq: the Coalition Provisional Authority.

The CPA was given the power to enact laws, to print currency, to collect taxes, to deploy police, and to spend Iraq’s revenue. Did the CPA hire experts in administration? Did they hire prize-winning economists or professional accountants? Did they hire scholars in Middle East studies or sociologists aware of the sensitive cultural and religious issues between the various Iraqi tribes and clans? Did they hire experts in logistics to insure material and supplies would get where they needed to go in a timely fashion? Did they seek out public health experts? Did they look for experienced construction managers?

Fuck no. They hired people who were 1) loyal to George W. Bush and 2) shared an ideology that was grounded in Christian conservatism.

Got that? In a Muslim country needing to be rebuilt after a war, the agency tasked with the rebuilding hired Christian conservatives with no expertise in rebuilding or running anything. Want to reopen the Iraq stock market? Put Jay Hallen in charge — a 24 year-old kid working in real estate with no experience or education in finance. Want to rebuild the nation’s health care system? Hire James K. Haveman, who operated a Christian adoption agency in Michigan that urged pregnant women not to have abortions. Got a US$13 billion budget for reconstruction? There’s 23 year-old Casey Wasson — she had no experience in accounting and had just graduated from an evangelical university for home-schooled children, but she thought George W. Bush was aces, so what the hell, let her help manage it. How hard can it be?

Did these rank amateurs and ideologues fuck things up? Oh lawdy, did they. Iraq is what it is today largely because after we preemptively invaded a nation that turned out not to be a threat to us, we put incompetents in charge of repairing all the damage we caused. Sure, we created a situation that encouraged a civil war to break out, but at least we made sure we weren’t giving the Iraqi people any money for abortions. 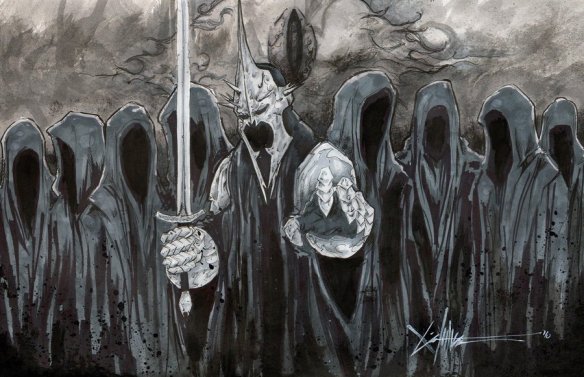 Far off yet is his doom, and not by the hand of man will he fall.

Since Donald J’s Cabinet of Nazgûl aren’t starting from scratch, it’s unlikely they’ll be able to fuck things up on an Iraqi scale. But the lesson is there to be learned. We’ve seen how putting ideology and greed above all can produce an epic shitstorm that can last for decades.

I’ve called Donald J’s cabinet the Cabinet of Nazgûl, but in all honesty that’s inaccurate. The Nazgûl were actually competent at their jobs. Sauron sent them out to do a job, and they did it pretty well. The general incompetence of Donald J’s crew can work in our favor. The men and women in his cabinet don’t know what the fuck they’re doing, which means they’ll spend a chunk of time tripping over their own tiny dicks.

It’s our job to resist and obstruct, to help them to trip themselves up. And if they don’t trip themselves, then we have to do the tripping for them. And trip them again as they try to get up. I hate that obstruction has to be a priority, but it’s that or allow things to get fucked up faster.

It’ll be a long four years, but then we can have Michelle Obama or Kirsten Gillibrand to run against Donald J. It’s not necessary for him to lose to a woman, but it would be SO much sweeter that way.

2 thoughts on “cabinet of nazgûl”