Back in 2008, when Polaroid announced they were going to stop making film, I thought maybe I’d pick up an old camera and play around with it. I was never a fan of Polaroids; the notion of instant film always struck me as gimmicky. They were okay for making quick, amateurish snapshots at parties and events, but not for ‘real’ photography.

Still, Polaroid’s announcement sparked enough interest in me that I took a trip to the local Salvation Army store in search of a camera. They only had one — a Polaroid Spectra 2. The clerk had no idea if the camera worked, but since it was only a couple of bucks I figured I’d take the chance. The clerk also told me I should check out the nearby Goodwill shop. I did; they had a Polaroid Sun 660. Maybe a buck and a half. Maybe it would work, maybe not.

I took the two cameras home, put them on a shelf, and promptly forgot all about them. A few years later I heard about the Impossible Project — a group of lunatics who decided to try to recreate the process by which Polaroid film is made. They bought a bunch of old Polaroid production machinery, leased a building, and set to work. And hey, they succeeded. After a fashion. By every report, the film was finicky. Exceedingly finicky. Crazy finicky. So very finicky that I had no interest in playing with it.

I sort of half-heartedly followed the progress of the Impossible Project. Maybe more like quarter-heartedly; it was sort of like keeping abreast of Italian politics — you were aware that stuff was happening, but it all seemed very distant and confusing and it didn’t have any real effect on me.

But I discovered I had friends who were mad for Polaroids. Mad and passionate. Friends who weren’t the least bit discouraged by finicky film. Friends like Meredith Wilson, and Lisa Toboz, and Heather Polley, who shot astonishingly lovely Polaroid photographs using expired Polaroid film or film from the Impossible Project. Another friend, Debra Broughton, has been photographing a specific barn for at least a year and a half (she shoots with a Fujifilm Instax, which is a more modern instant film camera). These women and the work they’ve done made me more and more curious about instant film.

Then, a few weeks ago, I learned about ‘Roid Week — a project on Flickr celebrating instant film photography. That was enough to get me interested in taking another look at those old thrift store cameras. And what the hell, I bought some B&W film from Impossible Project for the Spectra.

You’ve heard the phrase ‘a learning experience‘, right? Well, I had one of those. First, I learned that the camera sorta kinda functioned. It would take photos, but it wouldn’t eject them. They jammed. I did some reading, watched some videos, learned of a few possible causes for the problem, tried a few things — and none of them worked. So I sent an email to the folks at Impossible Project and asked, “Dudes, what else can I try?”

Get this: they replied within a couple of hours. And they told me what else I could try, but said the only way to test the camera would be to try another film pack. I should note at this point that Impossible Project film ain’t cheap. US$25 for eight photos. But — and seriously, get this — they offered me a free pack of film. So what the hell, I ordered another pack of B&W film for the Spectra AND a pack of color film for the Polaroid 660. The film arrived like two days later.

THAT is excellent customer service.

I loaded the color film in the 660, took a couple of test shots — and hey, bingo! The camera worked, the film worked. I made a few adjustments. Well, I made one adjustment. There aren’t really a lot of adjustments you can make on a Polaroid. Lighten or darken, that’s about it. I made my adjustment, shot another test shot, and then started to think about how to make photographs with a Polaroid.

There’s always been a cerebral aspect to photography for me. With the exception of street photography, most of the photographs I shoot are shot with some level of deliberation. I think about what I want in the frame and what I want to exclude it. I tend to think about shadow more than light. I think about depth of field, and the geometry of composition.

But with the Polaroid cameras I have, there’s little (or no) control over shadow — and the fixed focus lens severely limits what you can do with depth of field. So it all comes down to composition, right? Basically, I was using a camera I’d considered useful only for party snapshots to make what I hoped would be artful, thoughtful images. 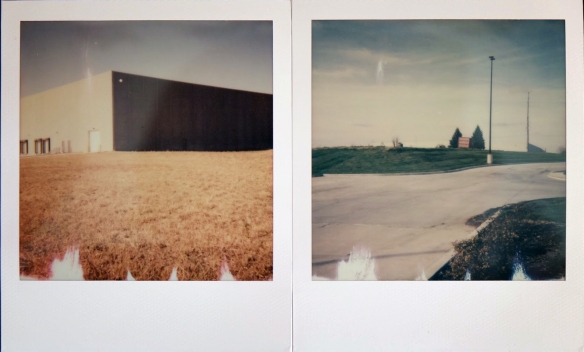 For me, that meant concentrating on the simplicity of composition. Line and form. Balance. Leading the viewer’s eye. Color blocking (with color film, obviously). The basics — which is sort of appropriate for such a basic camera.

Remember back a bit I spoke about how finicky Impossible Project film used to be? Well, it’s still finicky. Maybe not as finicky as before, but pretty damned finicky. Unlike the old Polaroid film, Impossible film has to develop in the dark. Almost everybody agrees the very first thing you do after the camera ejects the print is immediately put that little bugger away in a dark container. Don’t even bother trying to look at it for at least ten minutes. At least ten minutes. Some folks say give it an hour to cook.

This can sometimes be a monumental pain in the ass. In order to get the photograph of the industrial building above, I had to park my car near the field, open the glove box, open the passenger side door, walk about fifteen feet into the field — and THEN shoot the photo, immediately put it into the wee box the film arrived in, sprint to the car, slam the film box inside the glove box and close it. Then I drove home, put the car in the garage, and wait for an hour to go out, open the glove box, open the film box, and finally see if I’d got the shot.

I enjoyed ever minute of that. 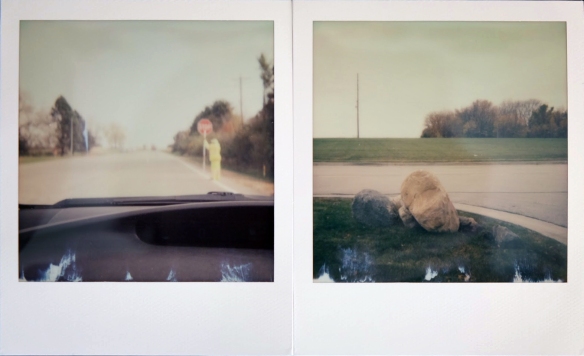 Here’s what I’ve learned about shooting with a Polaroid:

— It’s fun.
— It’s stupid expensive.
— It’s a lot of fuss.
— When you press the shutter release, there’s a charming little whirring sound that’s ridiculously happy-making.
— It’s SO easy to screw things up
— When it comes to Spectra film, you take what you can get. When I first ordered film, all they had was B&W packs. Now all they have is color packs.
— The autofocus is done by some weird sonar arrangement, which means shooting a photo through a window requires you to press a secret, hidden autofocus override button.
— It’s NOT instant film. It’s nowhere near instant. Unless you’re thinking in glacial or geological terms.
— It’s still fun.

I never got anything done in time for ‘Roid Week, sadly. I think for a serious photography project, personally I’d probably buy a Fujifilm Instax — they’re a lot more reliable and consistent. Not the Instax mini, but the silly-looking full-sized unit.

But for sheer unpredictable fun, it’s Polaroid. I don’t know that I’ll be doing a LOT of Polaroid work, but I suspect I’ll continue to do it sporadically. In fact, I’ve made some repairs to the old Spectra, and after feeding it a new pack of B&W film, it seems to be working. If I can get through a pack of eight without mishap, I’ll be ordering color film for the Spectra.

This is probably how all addictions begin.

7 thoughts on “not really all that instant”