I ain’t worried about no Trump.

He’s not going to be president. He’s just not. There’s no way. Let me say that again. There is absolutely no fucking way Donald J. Trump is going to become the President of These United States. I’m completely confident in saying that.

Well, I mean, I suppose it’s possible. It’s also possible that the supervolcano under Yellowstone National Park could erupt again later this week. After all, it’s been 650,000 years since its last eruption. So it’s within the realm of possibility. But is either of these massively calamitous events anywhere near likely to happen? Nope. 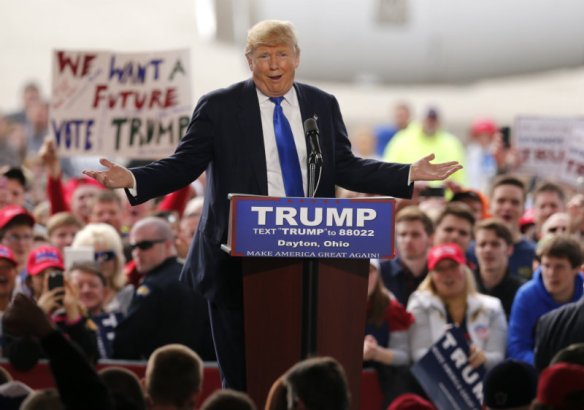 Here’s the thing: first off, Trump’s got no ground game. Sure, the guy’s pretty good at holding big rallies. Rallies are great visuals. All that spectacle — excited people waving signs and calling out the candidate’s name. That looks impressive on television and in news photos. But rallies don’t get voters to the polling stations on election day. You want to win an election, you’ve got to get voters to places where they can actually vote. You need a political infrastructure designed to both encourage voters and to shift their bodies from the sofa to the voting booth. Infrastructure is NOT flashy or exciting, so Trump and his crew of political remora haven’t devoted much time or effort to putting that infrastructure together.

I mean, look — in the Republican debates Trump could rise up on his hind legs and say astonishingly stupid things like “We’re not winning. America doesn’t win anymore. We don’t win. We’re just not winning.” and his opponents couldn’t say “What the fuck are you talking about — winning what?” They couldn’t say something like “Well, sure we’re winning, of course we’re winning” because that would be seen as supporting President Hussein Bams of Muslim, Kenya. If you look at the order of the fuckwits who dropped out of the Republican race, you’ll see that the most rational candidates dropped out soonest. The Republican primary was never a contest to determine who was the best person to govern These United States. It was always a contest to see who was the biggest asshole. 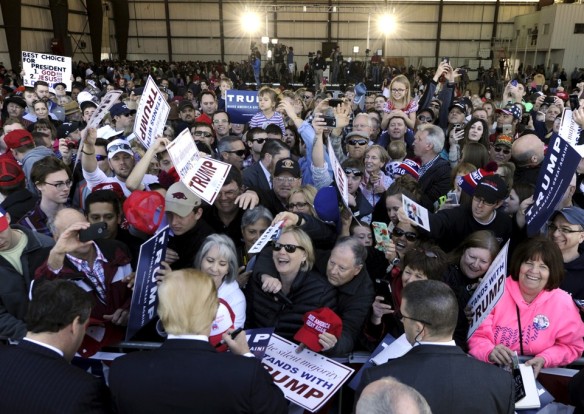 Which is why Trump’s biggest competition came from Ted Fuckin’ Cruz, the man whose own political party would vote him Most Likely To Be Left To Starve On An Ice Floe. Ted Fuckin’ Cruz is so actively disliked that if a plane carrying Republicans crashed in the Andes, they’d starve before they’d eat him. I don’t think anybody actually believed Ted Fuckin’ Cruz was the Zodiac Killer, but a lot of people wanted him to be. And that’s the guy Trump had to beat in the primaries. You put Trump on a debate stage with any Democrat not currently in a coma and Trump will explode like a popcorn fart. All it’ll take is somebody using a calm voice and saying “Well, no, building a wall along the border with Mexico is just a silly idea.”

But even if Trump had a ground game, and even if Trump was a competent conservative debater, he still couldn’t win the coming election. The math is against him — and math is a merciless sumbitch. Only about 23% of the electorate (those folks who are eligible to vote) are registered as Republicans. Democrats do a bit better (32% of the electorate) but the biggest voting bloc in the U.S. right now are Independents and unaffiliated voters (at 39% of the electorate). The remaining 6% are registered as Libertarians or Green Party or one of the whackadoodle political fringe groups.

So even if every registered Republican shows up at the pools and votes for Trump and if fully half of the unaffiliated and Independent voters experience a psychotic fugue state in the voting booth and go for Trump, that’s still only 42% of the electorate. That’s the most optimistic outcome for Trump. 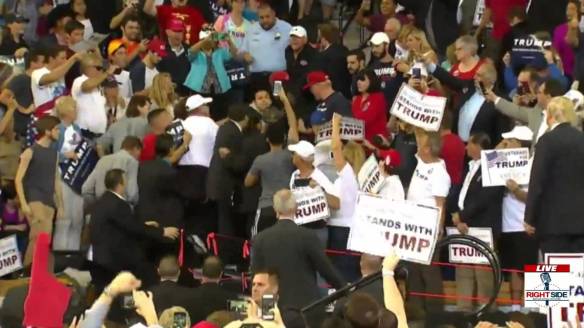 Trump’s not a serious candidate. The political party he represents is no longer a serious political party. He’s fucked — and with any luck, he’s fucked the entire Republican party. Trump’s defeat may force them to get serious again.

The only way Democrats can lose is by dividing the party and not showing up to vote. Which, now that I say it, is possible.

In other news, back in March of this year locals reported an area of the Shoshone River near Yellowstone National Park was boiling. That boiling has stopped. For the moment.

14 thoughts on “not worried about trump”