A couple years ago a friend alerted me to Google’s Chrome Experiments, a curious and interesting group of browser-based games and art projects. At the time there were maybe five or six hundred projects, and while I thought some of them were pretty cool and worth exploring, I was busy. So I bookmarked the URL and, as so often happens with stuff I bookmark, I promptly forgot all about it.

Maybe six months ago I heard that Chrome Experiments had reached the 1000 projects mark. That revived my interest. I found my old sadly neglected bookmark and began to noodle around, exploring the various projects at random until I stumbled upon a game called GeoGuessr — and basically pissed away all my free time for about a week. Maybe two weeks. Possibly three. Now I’m more moderate in my GeoGuessr time; I play once or twice a week — but the game still fascinates me. 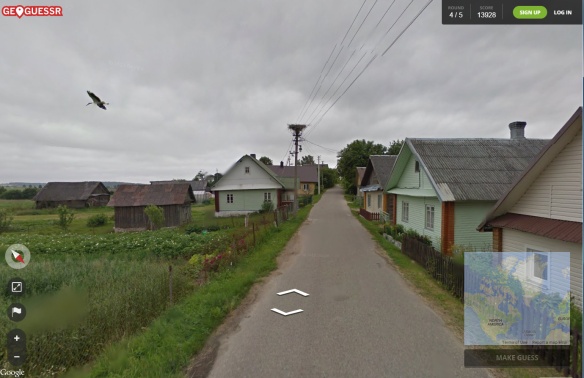 As the name suggests, it’s a game based on geography. The concept is simple. Using Google Maps’ Street View, the game drops you on a random street somewhere in the world. I use the term ‘street’ loosely, It might be an actual street. Or it might be a gravel road in a remote corner of the Ukraine, or an on-ramp of an Interstate Highway in the United States, or a dirt path along a newly planted field in Spain, or a back street in a mid-sized Brazilian city, or a boulevard in a major urban area in Russia, or in a suburban housing estate in Wales, or a secondary road in Croatia.

In fact, since the Google-cam can be worn as a backpack, Street View has expanded to include places not accessible to vehicles. I’ve found myself beginning a GeoGuessr game on a ski slope in Utah and on a hiking path to a Hindu temple in India.

The ostensible goal of the game is to use the visual cues and clues of your surroundings to determine your location. You ‘travel’ down roads in search of those cues and clues, then you make a guess about your location and mark it on a map  You accrue points based on how accurate your guess is. Each game has five rounds — five different geographical locations — and at the end, you’re given a total score.

That’s it. As I said, the concept of the game is simple. Part of the attraction, of course, is the puzzle aspect — trying to figure out where the hell you are. That’s fun. Frustrating fun, sometimes. Challenging fun. But still fun.

But for me, figuring out my location (and earning a high score) is secondary. What draws me repeatedly back to the game is the power of the unexpected. The GoogleCam isn’t just mapping streets; it’s also moving through the daily events of the world, and the world is jammed full of weird, absurd, profoundly beautiful, desperately sad, fascinating stuff. Roadside shrines to gods and memorials to victims of traffic accidents. Prostitutes plying their trade along the street. Mountains that come straight out of an Indiana Jones movie. Astonishing poverty. Exotic coastlines that make you think of pirates or castaways.

The randomness of GeoGuessr inserts you into unexpected locations where ordinary people are going about their ordinary daily lives. The reality of these lives — which are often radically different from my own — is fascinating. Kids playing stickball in the street. A young man meditating in a remote Hindu temple. A recent single-car accident in some remote road. A man walking by himself on some lonely stretch of road in northern Norway. A woman hitchhiking in South Africa. And the GoogleCam records it all with a completely dispassionate objectivity.

I do enjoy the game aspects. There’s something fulfilling about being dropped at a random spot in the world and being able to locate that spot on a map within a few meters. Yet after I’ve figured out the location, I often continue to ramble around, intrigued by the ordinariness of life in other parts of the world.

I’ve begun to collect screen captures of bus stops. I’m thinking about collecting images of railroad crossings. And maybe bicycle riders. And people walking their dogs. These are things that are universal, and yet they’re all so very distinctive. The people waiting for a bus in South Africa probably have a lot in common for the people waiting for a bus in Russia. The cyclist in northern Spain probably has something in common with the cyclist in Australia, and the one on that mountain road in Utah.

Some of you who read this will be tempted to play GeoGuessr. Give into that temptation. You should be aware, though, that it’s an enormous time-suck. You’ll promise yourself you’ll only play for half an hour — but then you find yourself wondering what’s around the next corner, or over than next hill, or through that tunnel. You’ll wonder what that building is, and you’ll want to check out that overgrown cemetery, maybe follow that alleyway down toward the docks. So let me repeat this: it’s an enormous time-suck.