Much of what I do for a living requires (or allows) me to sit in a little room and think about stuff, then write something about the stuff I’ve thought about. Some of the stuff I think about is real stuff that’s actually happening in the real world; some of it is just shit I’m making up, and some of it is shit other folks have made up but aren’t entirely happy with. But I think and I write, and yeah, it’s a pretty weird gig.

The nice thing — one of the nice things — about the gig is that it’s not governed by space. I may be physically sitting in that little room, but my mind and imagination are pretty much unfettered. All those clichés you’ve heard about your thoughts only being limited by the stretch of your imagination — corny, but true. It’s a pretty sweet gig for my mind. My body, though, resents the little room. My body wants to get up and move around.

So almost every day I indulge my body’s wishes. I go for a walk or a bike ride. I ride the bike for the fun in it. Sometimes I’ll run errands on my bike, and yeah, that’s good for my body and for the environment and all — but mostly it’s just fun.

But here’s the thing about a bike: you have to pay attention. Cars and trucks will run into you, pedestrians will step directly in your way (even if you call out ‘On your left’ as you approach), dogs will chase you (so will geese, by the way — and that’s a lot more alarming than it sounds), the streets have potholes, the bike trails sometimes have walnuts or other detritus scattered around. When I’m cycling, I have to keep a big chunk of my mind constantly engaged with the world around me. I enjoy that, partly because it makes it impossible to think about whatever I’d been thinking about in that little room.

Walking, though — totally different. Walking doesn’t require the same level of situational awareness that cycling does. Sure, you have to pay enough attention to avoid stepping in dog shit or tripping over a curb, but basically walking doesn’t require much in the way of immediate vigilance.

So I walk a lot, and I walk all over. Suburban neighborhoods, bike paths, city streets, alleys, hiking trails, country roads, the city skywalk. I walk year around, regardless of the season (though rarely in the rain). Sometimes I tote a camera. Most often, I don’t — though with a smartphone you always have a camera with you. Sometimes I take photos of stuff I see when I’m walking. All the photos you see here were shot while I was taking a walk.

I do three types of walking. Some of it is just utilitarian — a way to get somewhere and do something. You know, drop off a package at the local FedEx office, buy a clove of garlic, that sort of thing. Ordinary chores and tasks that are located nearby and aren’t particularly time-dependent.

Most often, though, I walk and think — usually about something I’m writing. Or want to write. Or have been paid to write. That type of walking is essentially an extension of sitting and thinking in that little room, only without the sitting or the little room. Without the four walls and the computer screen in front of me, I’m generally more relaxed and flexible in my thinking. When I’m walking, I’m not distracted by the words on the screen. Instead, I’m thinking about what those words need to do.

I also walk as a form of meditation. A million years ago I briefly belonged to one of those strict, formal Zen communities where meditation practice was regimented. It was a group activity, with a starting time and a stopping time. You enter the zendo, make gassho to your zafu (which is basically bowing to the cushion you sit on), sit in orderly lines, wait for somebody to tap a brass bowl, which gives out a lovely tone that’s the signal to get to meditating. You sit very still, focus on your breathing, release all distracting thoughts. While you’re meditating some guy walks quietly around, watching to make sure you’re actually meditating and not thinking about what you’re going to make for supper or whether you should adopt a cat. If he thinks you’ve allowed yourself to become distracted, he whacks you with a little stick.

It works for some folks. It didn’t work for me. After a few months of that, I stopped going. I didn’t abandon Buddhism, but I abandoned meditation. Years later I stumbled across an article that mentioned a monk named Thich Nhat Hanh and walking meditation. No rows of cushions, no regimented starting or stopping time, and no guy behind me with a fucking stick — sounded good to me. So I did some reading, talked to some people, gave it a try.

It’s still about breathing. But walking meditation creates rhythm between your breathing and your steps. The heart of the idea, according to Thich Nhat Hanh, is to ‘arrive’ with every step — which sounds awfully buddha-buddha, but is really pretty simple. It just means being aware of every step, connecting with every step. My walking meditation is slower than my usual walking pace. I breathe in for three steps, out for four steps. It’s that simple.

And it’s easy to transition from my utility walking or work-walking into walking meditation. When I decide to meditate, I usually start by thinking of a simple Buddhist poem.

Washing the dishes
Is bathing the Buddha

And that triggers the meditation. I breathe in with the first line, and breathe out with the second. After a bit, the words becoming nothing but sounds and lose their meaning, and then it’s all about the rhythm. Everything else slides away. Easy peasy, lemon breezy.

I meditate until — well, until I stop meditating. It might a couple of minutes — it might be twenty. Doesn’t really matter. The meditation shifts back to plain walking, but I feel more refreshed and creative. 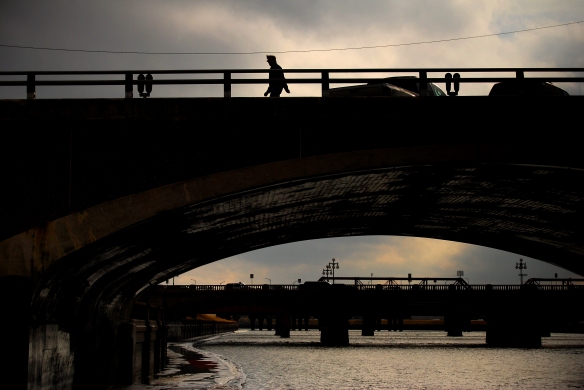 I had a point when I began writing this. I’ve completely forgotten what it was. Something about walking, probably. Or maybe something about writing. I’m pretty sure it wasn’t about meditation. It could have been about how sitting too long in a little room thinking about stuff can turn your mind into guava jelly.

Clearly, I’ve been sitting in this little room too long.

10 thoughts on “walking and washing the dishes”