First, let me make a request. If you have something to say about anything I’ve written here, I’d prefer you say it in the comments rather than send me an email. That way your point of view will be most accurately represented.

I received some email (well, a few emails…okay, three…I received three emails) that I think deserve a response. Two of them essentially suggested Stéphane Charbonnier and his compatriots at Charlie Hebdo were at least marginally complicit in their own murders. Neither writer actually said that directly, but it seemed implicit. I should also say both writers were firm in stating that there was absolutely no justification for the murder of the twelve people killed in the attack. Both were explicit in stating they were passionate supporters of free expression. However, both took the “don’t poke a stick at a mad dog” approach.

Charbonnier was an egotistical narcissist. He knew he was provoking a group who responded to insults with violence, yet he insisted on doing it — and now there are twelve families who’ve lost loved one. All because Charb wanted to be a bad boy.

They knew those offensive cartoons of Muhommed [sic] would be insulting, they didn’t have to publish them, but they did anyways. What did they expect? That the terrorists would write a strongly-worded letter to the editor? 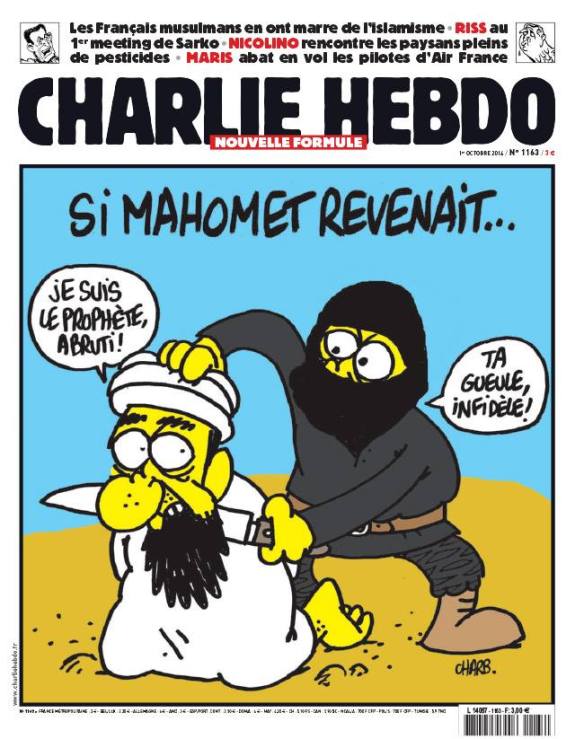 The third email misinterpreted my point entirely. Or maybe I simply wasn’t as clear as I’d hoped to be. Here’s the meat of his email:

It’s long past time people started saying fuck you to Muslim terrorists. They should republish every comic that insults Mohammed.

I wasn’t saying ‘fuck you’ to Muslim terrorists. Well, yeah, okay, I was saying that, but not JUST to Muslim terrorists. I was saying ‘fuck you’ to ALL extremists who think violence is an acceptable way to express disagreement or to silence those who disagree with them. That same ‘fuck you’ applies to Christians who shoot abortion providers, to Sovereign Citizens who shoot law enforcement officers, to environmentalists who set traps that hurt or kill loggers, even to that woman in Vancouver who put logs and rocks on mountain bike trails.

Let me also say this: if anybody is using the attack on Charlie Hebdo to justify their hatred of Islam, then that ‘fuck you’ applies to them too.

Finally, there’s this — a comment addressed to me on Facebook that was unfortunately removed before I could respond:

Greg, respectfully, if someone firebombs Westboro Baptist Church, are you going to change your avatar to ‘Je Suis GodHatesFags” by the same rationale? They operate under the same freedoms and would have been attacked by the same type of motives.

It’s a tragedy that this all happened; to pretend it was an attack on free speech is naive. It was an attack by twisted people against deliberate antagonism and provocation. I’m not excusing anything; the murderers were wrong in the worst of ways. But nobody gains anything by cartoons showing Muslim women with burkas shoved up their asses, or someone else’s prophet being born out of a man’s asshole, or posing in a pornographic film, or whatever, unless bigotry and dehumanizing people for the sake of doing so is your thing. It’s not for me.

That’s a perfectly valid response, and those are valid opinions. Would I change my avatar to Je suis GodHatesFags? No, of course not. But I would defend (and have defended) the right of the Westboro Baptist Church to express their ugly opinions. Here’s the difference between the WBS and Charlie Hebdo: the WBC is claiming only one viewpoint (theirs, of course) is valid and deserving of respect, whereas Charlie Hebdo has been saying no viewpoint is deserving of unqualified respect.

Nobody gains anything from the Charlie Hebdo cartoons? I disagree. Yes, many of them are offensive. Deliberately offensive. Intended to offend. But Charlie Hebdo has been an equal opportunity offender; they offended everybody with equal enthusiasm. I’d argue that society at large gains from that approach, if only because it expands the range of acceptable opinions.

Is this offensive? Yes, totally.

Here’s a true thing: the writers and cartoonists at Charlie Hebdo did nothing to elevate the marketplace of ideas. But they certainly contributed to it. They actively participated in the marketplace of ideas. They took the position that nothing is so important that it can’t be mocked. They said the more important a person or an idea is, the more that person or idea needs to be mocked. Nothing is sacred.

Yes, a lot of their cartoons are offensive and childish and mocking and unfair — and bless them for it. Are some of their cartoons racist? Yes…and no. They certainly used racial and ethnic stereotypes, but from what I’ve seen they used them to mock racial and ethnic stereotypes (which, by the way, is the same approach used by R. Crumb). Are some of the cartoons cruel? Yes. Do they make a point? Yes. We may not all agree with their point or the way they make it, but it’s hard to argue that the cartoons are…well, pointless.

Is THIS racist? Well, yeah, it is.

Are there better ways to point out the Emperor’s bare ass? Yes, absolutely. But if we’re to protect free expression, we have to defend the right of publications like Charlie Hebdo to be offensive. It’s not necessary to approve of Charlie Hebdo. But it is important to support them — especially now.